I have to say that Wellington is a beautiful capital for a beautiful country. Nestled amongst green rolling hills and blue waters, the city and its suburbs look peaceful and easygoing. At least that’s what the couple of days spent here made me think. 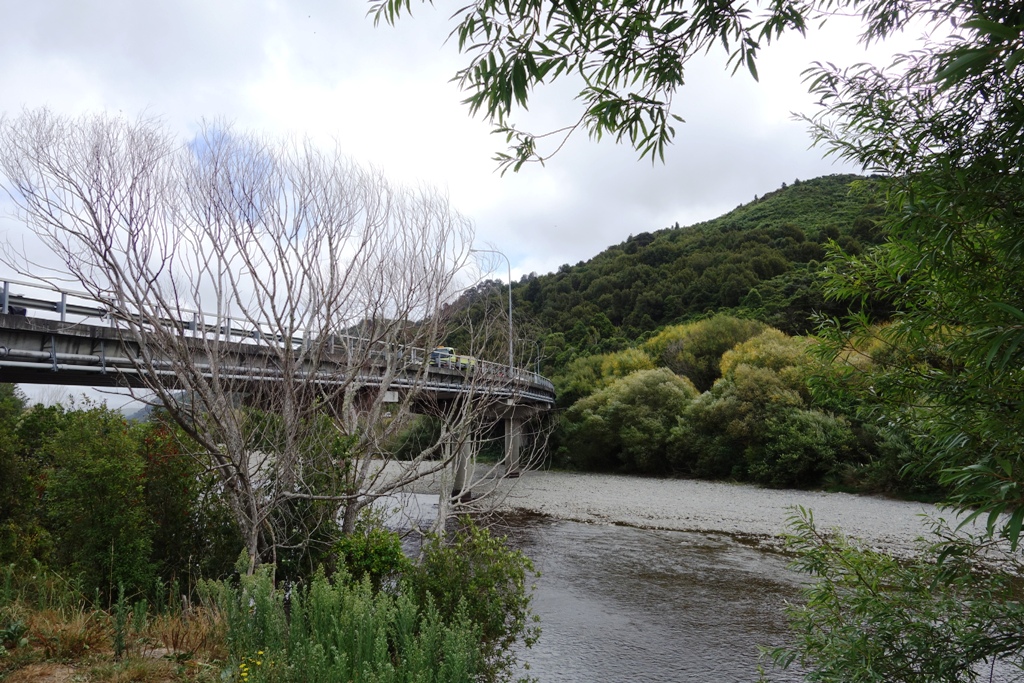 We did spend a fair amount of this time in the nature, as we usually do, and not in the heart of the city. But that’s part of the charm of a place, if not most of it, in our opinion. We will see more of the city on the way back from the South Island when we have booked a room in a hotel downtown.

We chose to stay in one of the suburbs, Lower Hutt, for this first encounter. Angie’s Little House with Charm on Farm, as advertised on Airbnb, some 30 km away from downtown Wellington was a perfect location for the plans we had in the area. We enjoyed meeting Angie’s family, especially the two witty younger kids that helped us settle in and make a bbq. These two also helped us meet the donkeys and the chickens they grow as well as ‘try’ to make us friends with the house cat. That one didn’t work very well 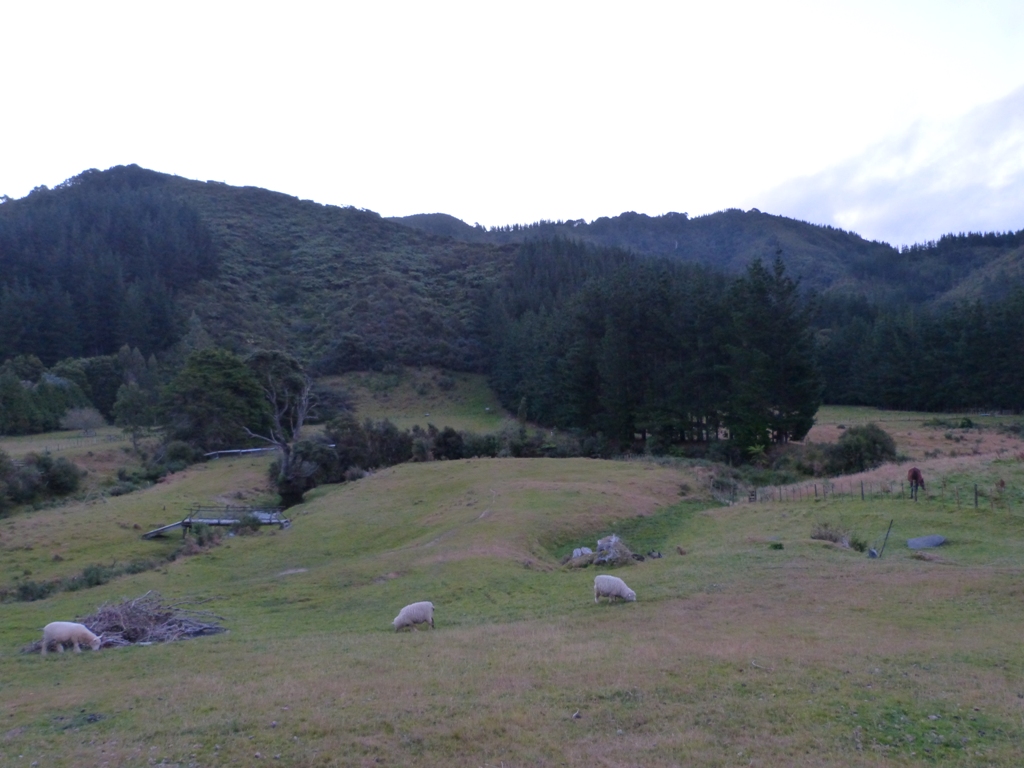 Little House with Charm on Farm

To get to Wellington from the north of the island is interesting but challenging. SH2, one of the main highways in the country is winding through forests and national parks for about 30 km. The road is narrow and at the edge of the tall hills, and although the speed limit is 100km/h, you barely get a few areas where you can drive with 50 an hour. I was for the first time happy that we had to drive on the left side of the road.We at least were driving on the inside instead of on the edge. We did have to drive this part three time though so I guess it didn’t help entirely. 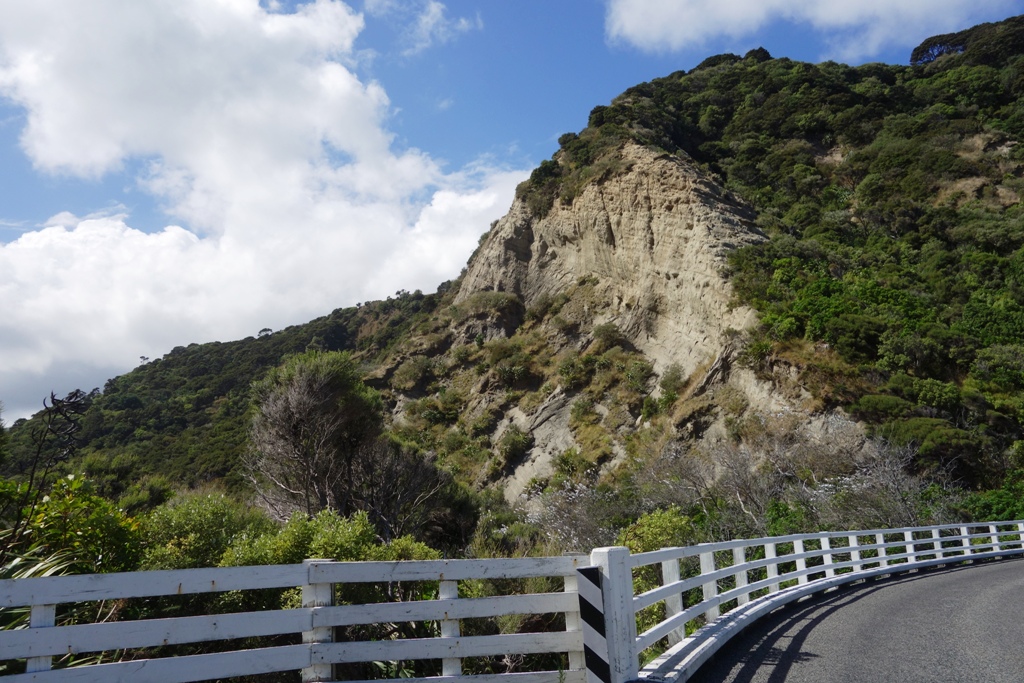 Talking about plans in the area: we wanted to visit the city a bit, search the area for spots where Lord of the Rings was filmed (and there are plenty here – stay tuned for a separate post about this quest) and hike the Putangirua Pinnacles. Ok, I admit, this got on the list because of LOTR as well, but I have to tell you, they knew how to choose the best places to make the film.

The hike starts on the shores of Palliser Bay, at the bottom of the north island, 120 km away from Wellington, but the drive is well worth when you end up feeling like you are on another planet.

The walk starts on a riverbed, but with the exception of the rainy days the water will not pose any problem. The map at the trail head shows two options to choose from: a track through the bush, up the hill to a lookout with amazing views over the pinnacles and the bay and one on the riverbed that gets at the bottom of the pinnacles. You can combine the two though and do a loop up on the riverbed to the pinnacles area proper and then climb up to the lookout and down through the bush (or the other way around). If you don’t have 3 hours or so to do the whole thing then choose to see the pinnacles from the bottom, it is much more picturesque and it offers lots of opportunities to awe at the wonders of nature. 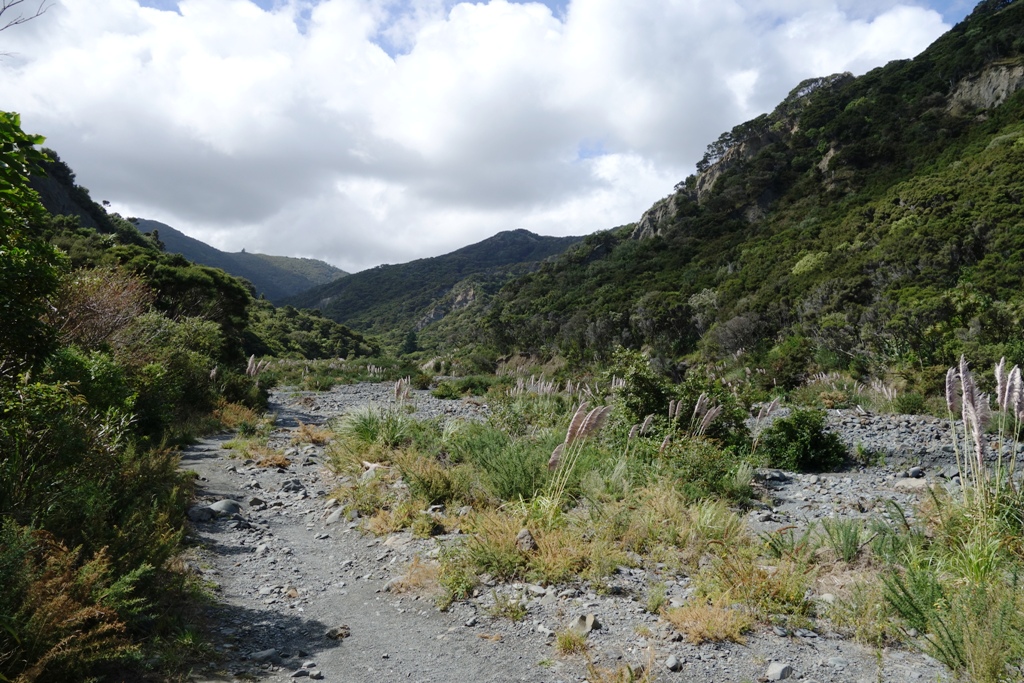 Beginning of the Putangirua hike

We did the loop, as well as going up on an off side stream bed that was dry at the time we went there. The scree is treacherous and you have to pay attention where you walk especially on the way back down. I was too excited about what I was seeing around and fell a couple a times, but nothing to worry about

The first part of the walk is beautiful, but the bed of the river is wide so you kinda see the rock formations in the distance. 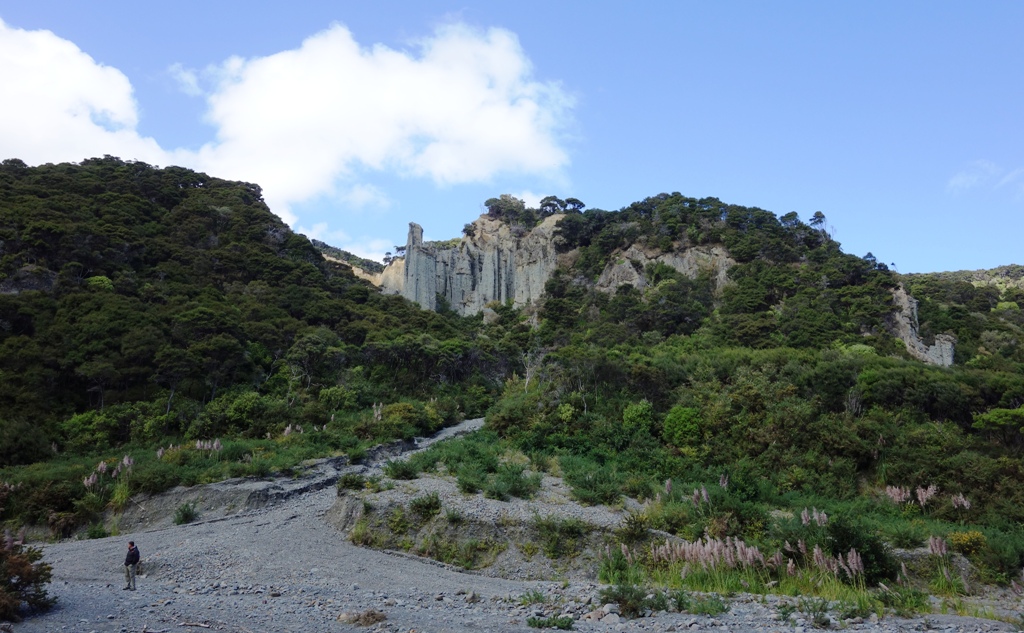 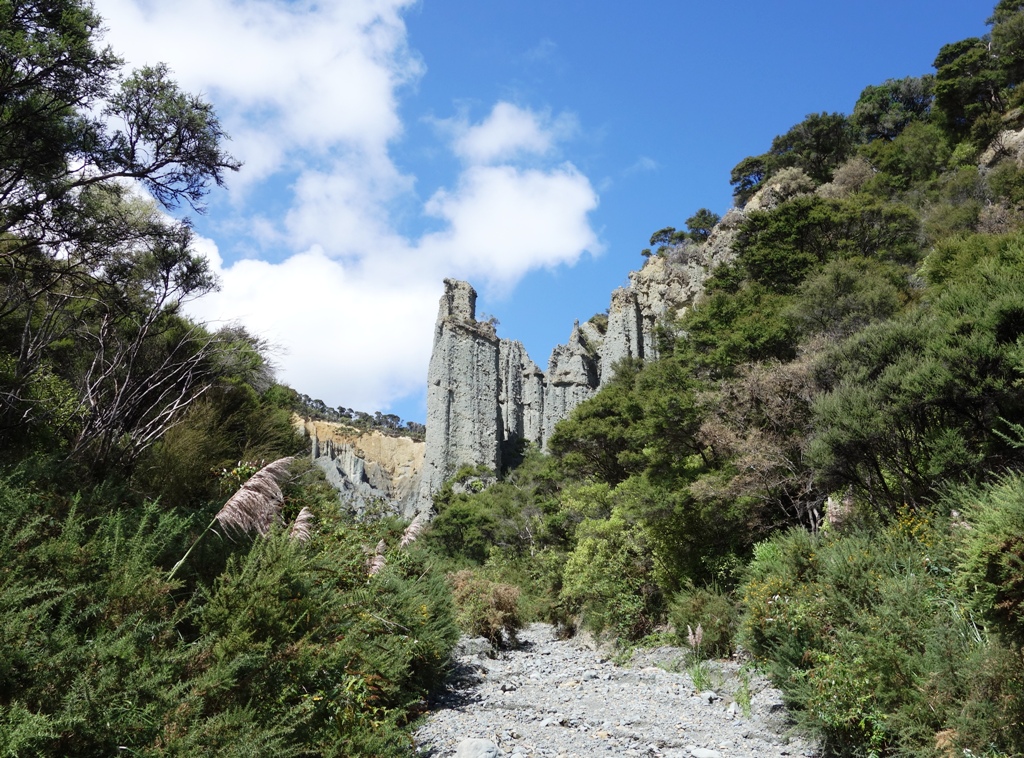 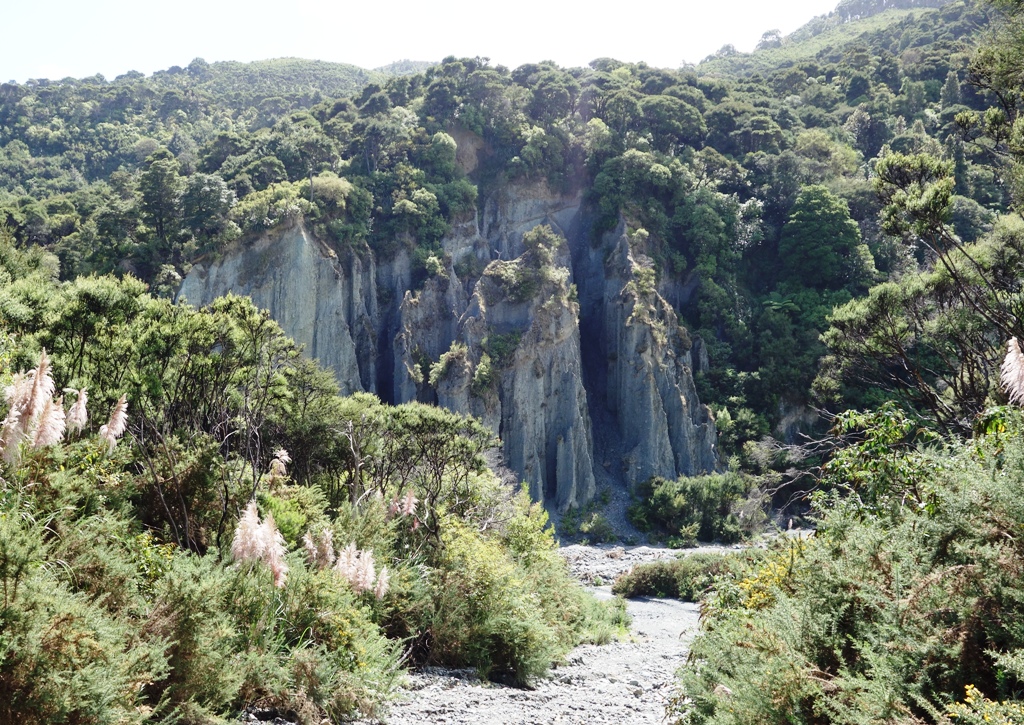 Then you get to a bend in the river and start walking on a steeper hill. And there they are, massive stalagmite type structures, hovering on both sides of the narrow passage made by the river. They look like sand castles that someone thought of mixing some rocks in and you expect to see them crumble at any moment. 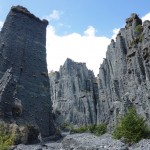 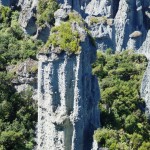 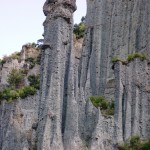 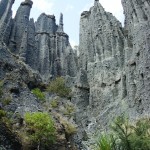 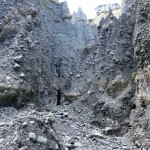 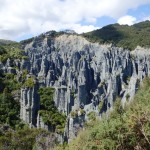 Each one of them offers you the opportunity to come up with a name or a shape that they remind you off. The most amazing one was this face, looking straight through you. 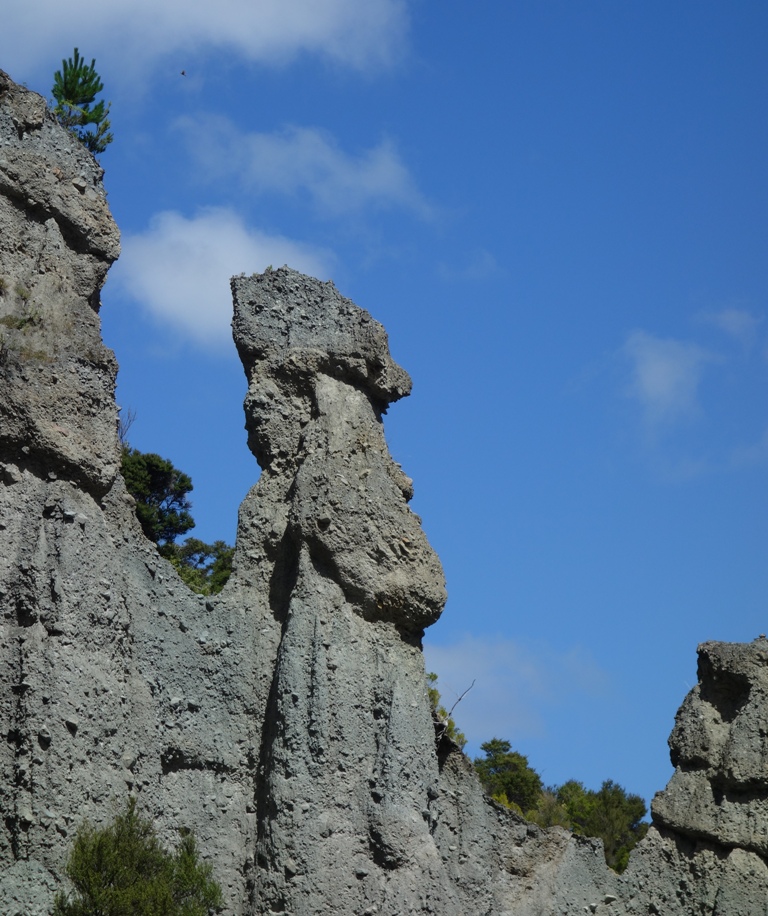 The face of the pinnacles

We escaped from the bony fingers trying to keep us in, and took the next day to explore the city. I needed a new camera (after loosing the battle with the rain at the other pinnacles, on Coromandel) and we wanted to check Mt. Victoria and the Te Papa museum.

You can hike up or drive to the top of the mountain, the former being what we chose. The views are amazing and there is some history to read about at the top. For whatever reason we thought that the cable car is going up this hill and that we will take a ride down, but alas it was not so. Well, maybe we will ride it on the way back, if we find the proper hill it is at. 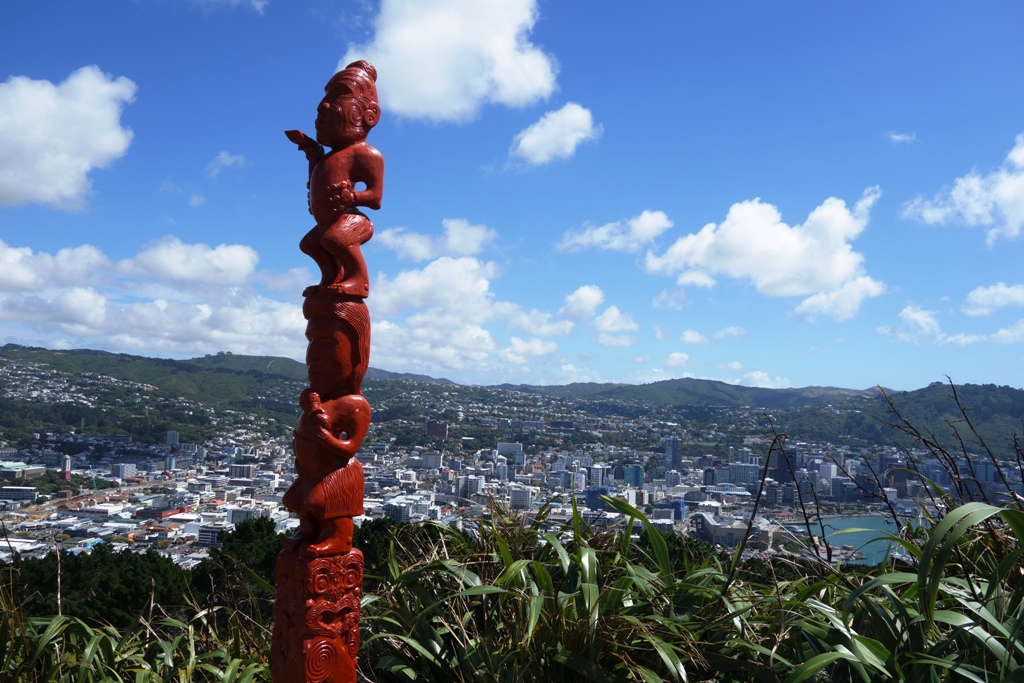 The museum is interesting and also free, but I have to admit that I feel like if you see one you’ve seen it all. The topics covered are similar (maori and white men history blending together, volcanoes, introduced spices) and while is very interesting going through them once or maybe twice, this museum was probably the 4th one we were going through. After an hour or so we decided that having some beer and fish and chips at a bar would be more interesting. So it was done.

There is a known rivalry between Wellington and Auckland, so I am glad we visited both.  Auckland was fine for our 3 week break from vacation and I think we would have been equally happy in Wellington. I guess it comes up to the accommodations you can find at the time you are looking for it. Wellington didn’t have a lot of longer term option for us, while Auckland did. But I would gladly spend a week or two in the capital as well. Maybe I would get to see what the fuss is about the Wellington winds. There was none when we were there.

3 thoughts on “About sand castles and rolling hills”