From Auckland, we traveled over to the Coromandel Peninsula, a jet of land across the Hauraki Gulf from Auckland. This has grown to be a getaway spot for many Aucklanders because of its close proximity to the city and the abundance of nature to be found. On a clear day you can even see the peninsula from the city.

We started our trip with a drive around the Firth of Thames, up and across the peninsula, over to Whitianga, the town where we stayed. The drive from Thames, a town on the peninsula at the southern end of the Firth, up to Coromandel, about three quarters up the Firth, was a beautiful seaside drive. The road is right along the water, tracking with the natural lay of the land and staying close to the water’s edge pretty consistently. 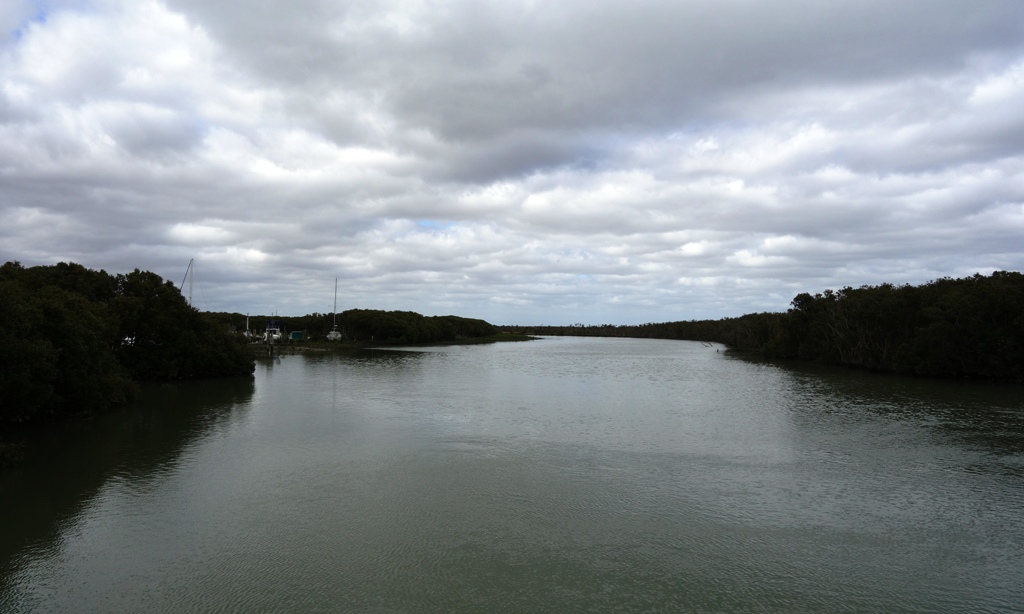 Coromandel Town was a quaint little stop with a few nice shops and places to eat. We found a butcher here that smoked their bacon with Pōhutukawa wood, giving a really nice flavor to the meat. Of course we had to pick up a bit for ourselves. At Coromandel Town the road headed off the coast and up through the hills. This road, like all the roads in the Coromandel we were to find out, is just as serpentine as the coast road, providing great fun while driving through the area. We wish we were on motorcycles though!

View from the drive up and down to Whitianga

Whitianga is a sleepy seaside town perfect for a getaway. When we came into town it was extra sleepy as it was midweek and the weather was not the best. A storm was building up on the Pacific so we had some hints of rain and turbulent clouds to watch. This came and went so it was of little concern to us. The churn of the clouds was quite a marvel to watch at the end of a day of driving mountain and seaside roads. 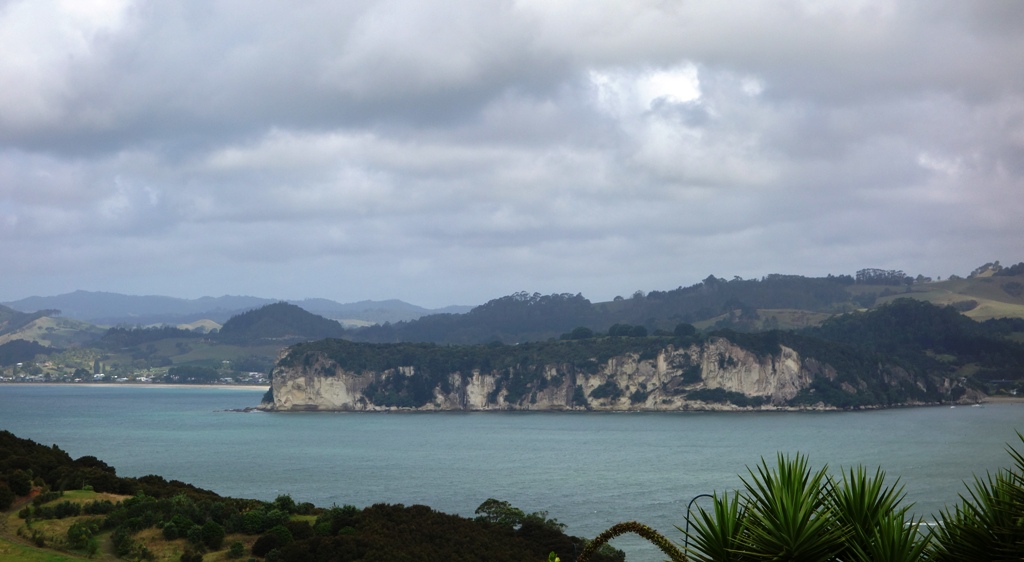 View over Whitianga from the place we stayed at

Our next day was beautiful, a few clouds to keep the sky interesting, but mostly sunny and warm. We decided to go to Hahei and check out Cathedral Cove, a stretch of beach with a large ignimbrite archway (a white, massive rock formed from pumice and ash that was erupted about 8 million years ago). To get to the cove you drive a bit out from Hahei and then hike for about one hour and a half return. 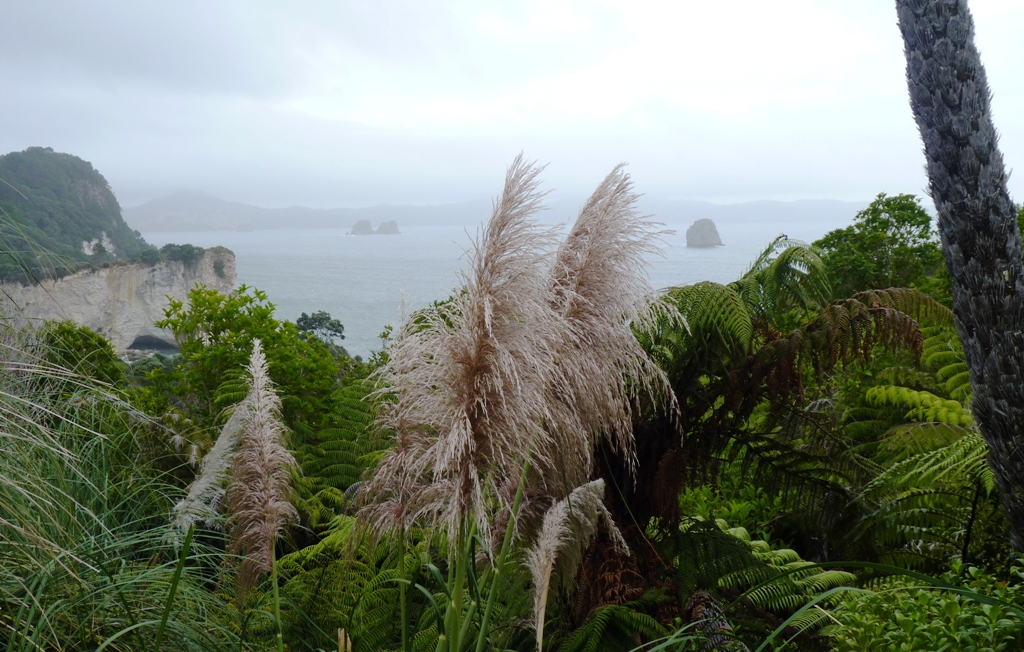 Walk to the Cathedral Cove 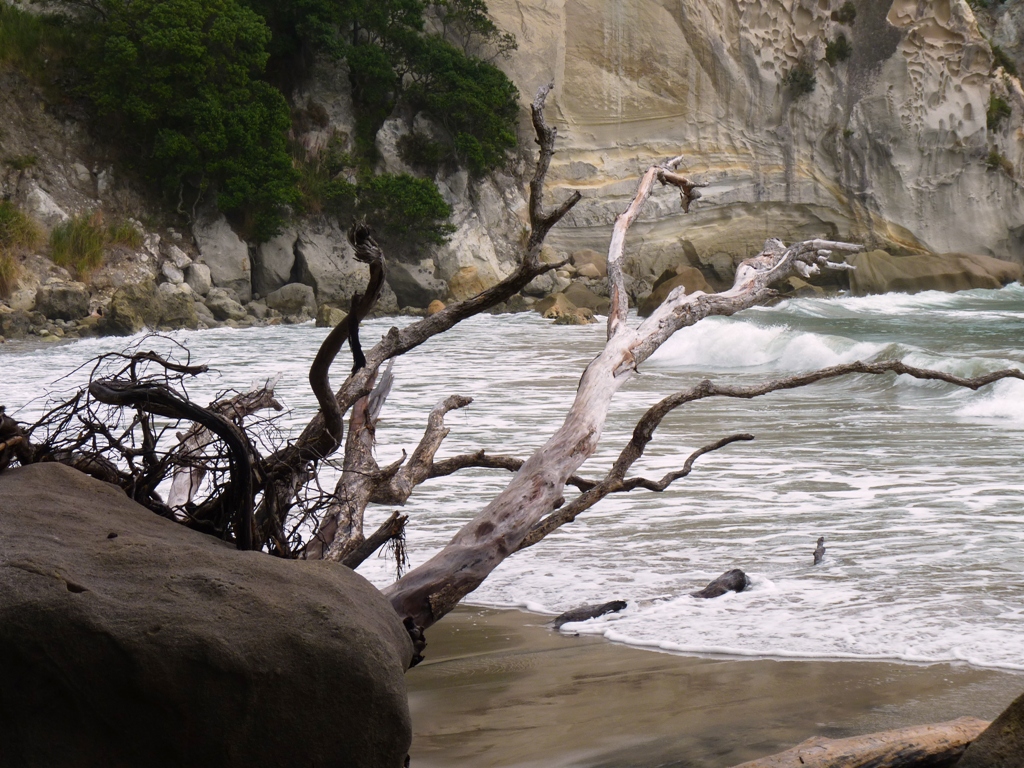 The beach and cove are fantastic. When you come down the stairs you are greeted by great views and a nice little beach. 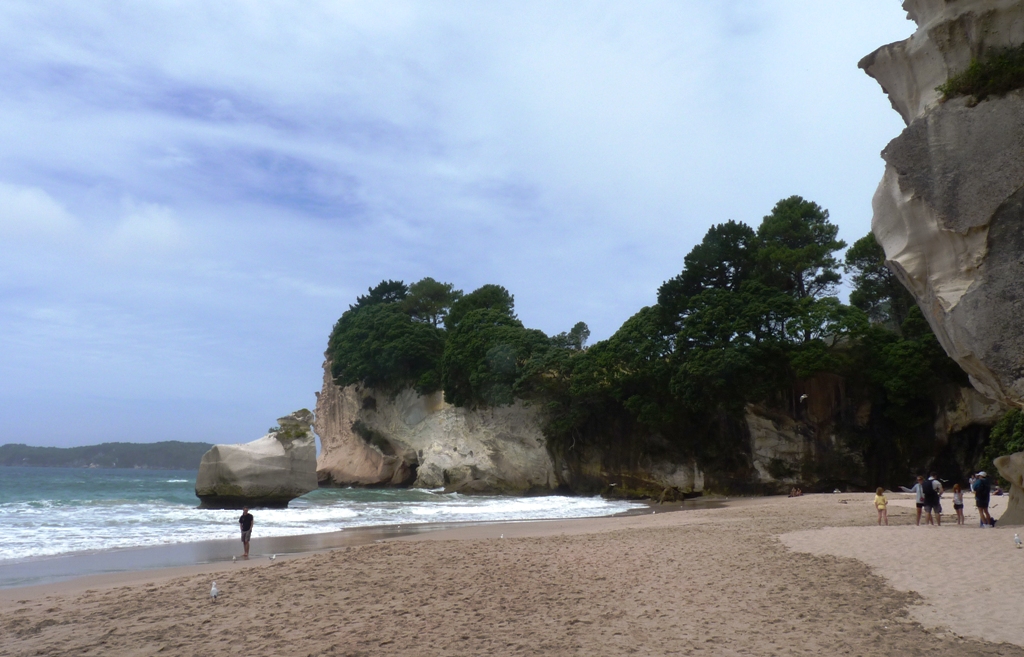 Walking out to the beach and turning left you find the arch. Its’ easy to spot it because that’s where everyone is taking pictures. 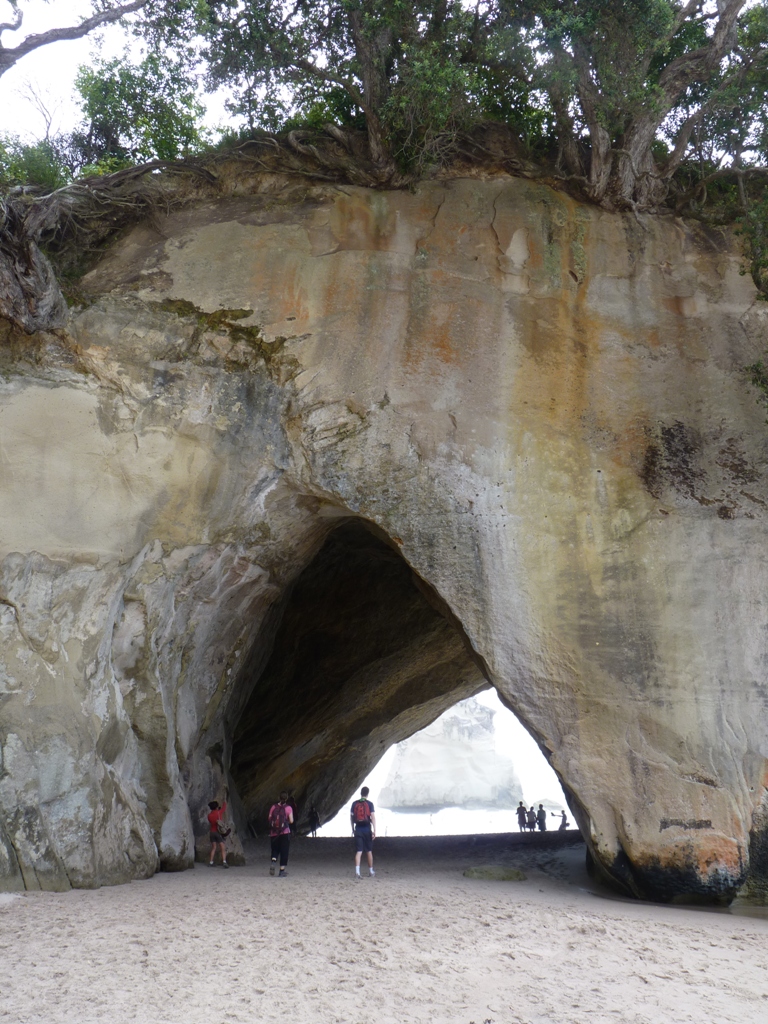 When we arrived the tide was high, so passing through the cove meant getting wet. On the other side of the arch is another beach with great views and sun. We had a picnic lunch with us, so we stopped here, ate and did a little swimming. Swimming isn’t quite the right word for it. The water was about 55 Fahrenheit and the surf was strong. We had a lot of fun letting the waves push us around a bit before we were too cold. With the sun, warming up was easy so we got quickly back in the water. 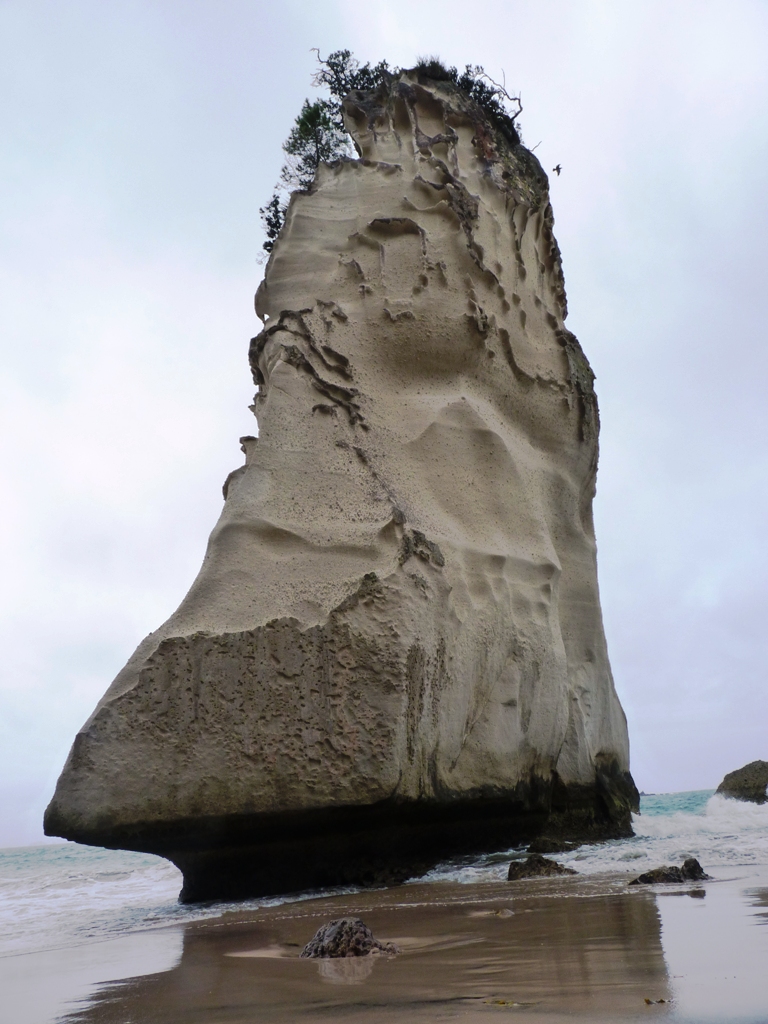 Te Hoho – the pumice ship like rock at Cathedral Cove 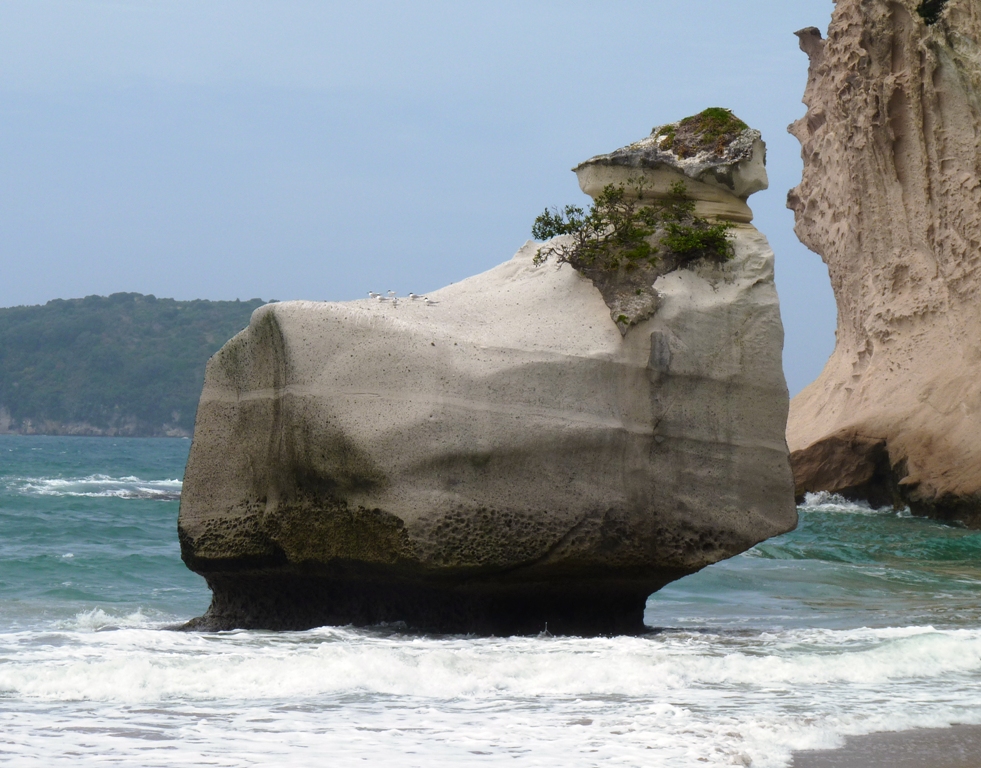 After Cathedral Cove we wanted to check out Hot Water Beach, just south of Hahei. This place is remarkable because during the low tide, you can dig a hole in the sand and sit in hot water pools. This happens because of an underground river of hot water that runs into the ocean. At high tide the ocean water mixes too much and you don’t get the effect. When we went, we saw that we were with 200 like minded people. This was a Wednesday in not so great weather so I can’t imagine what it’s like during the weekends. We enjoyed that we were able to see this phenomena, but we didn’t stick around long enough to fight out a space to dig a hole for ourselves. 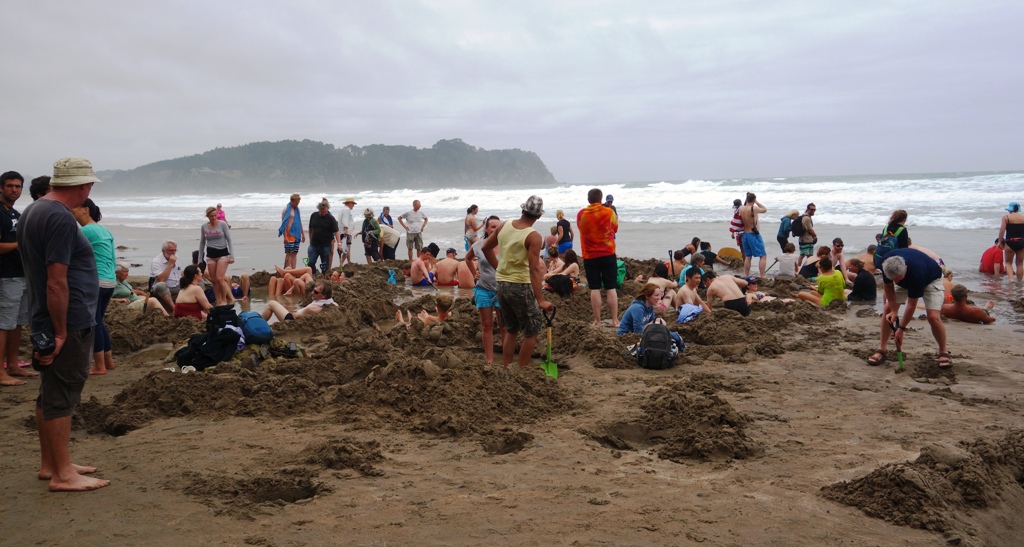 Hot Water Beach and the craziness that comes with it

The next day we were up for a hike. We found the Coromandel Pinnacles as a hiking objective and decided to check it out. The round trip was planned for about 6 hours, 1.5 hours longer if you wanted to climb the actual pinnacles themselves. The weather for the day looked mixed when we started driving, bit of sun, bit of cloud, perfect for a hike. 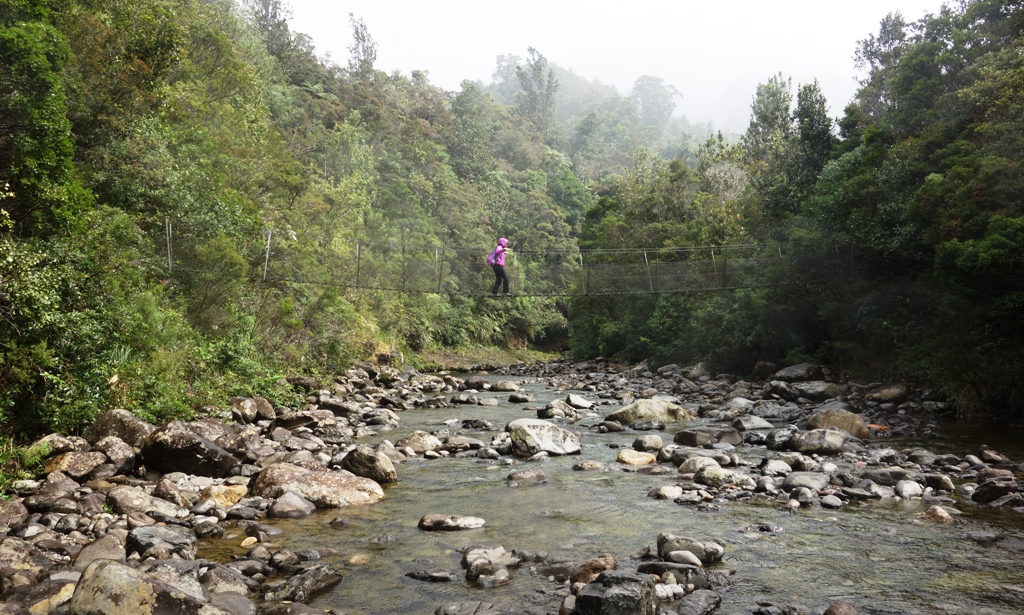 Beginning of the walk to the Coromandel Pinnacles

Hiking in New Zealand is gorgeous. The flora is different than what we have been used to. The hike up introduced us to many fern and moss species that we had not seen before. 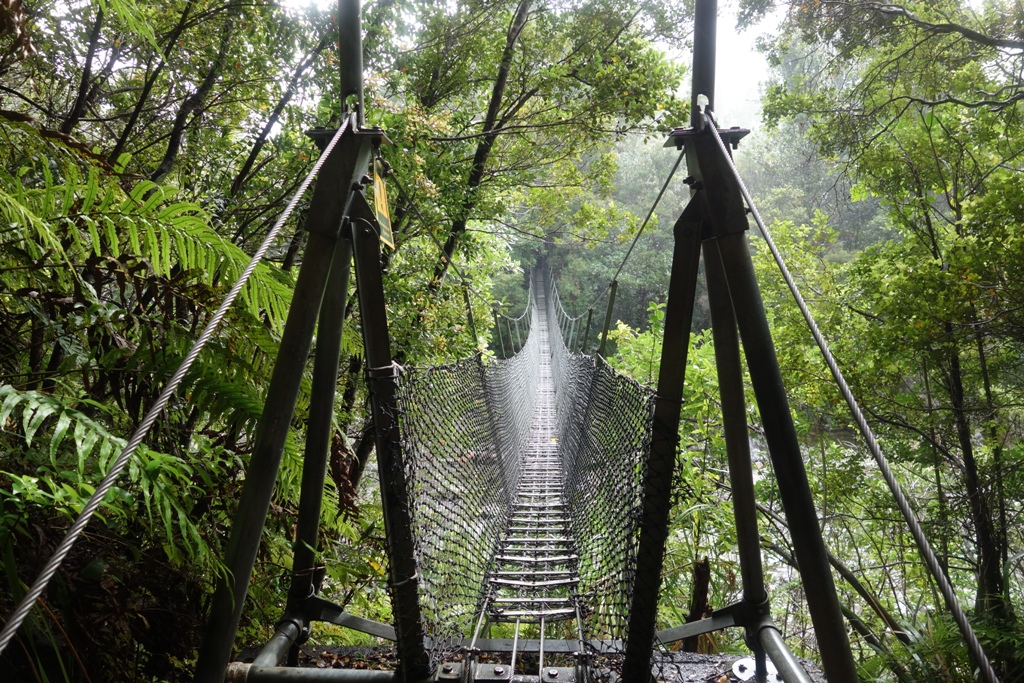 One of the multiple suspended bridges to be used during floods 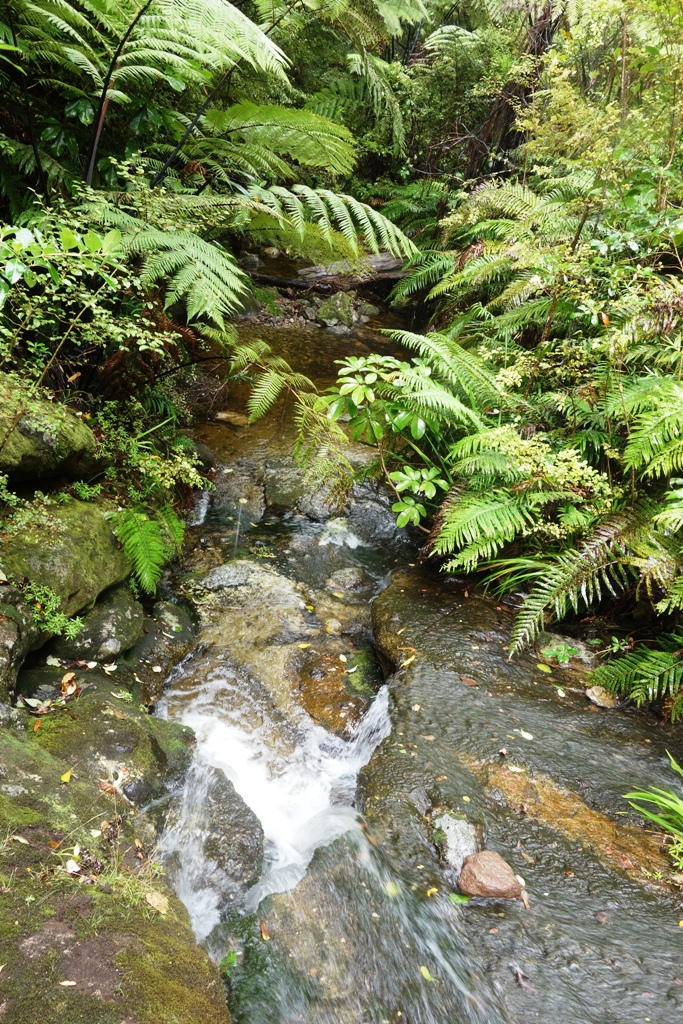 New Zealand flora at its best

This rainforest isn’t ‘what was here before’ because most of all the native Kauri trees had been logged out years ago. The current growth is made of mostly introduced species. 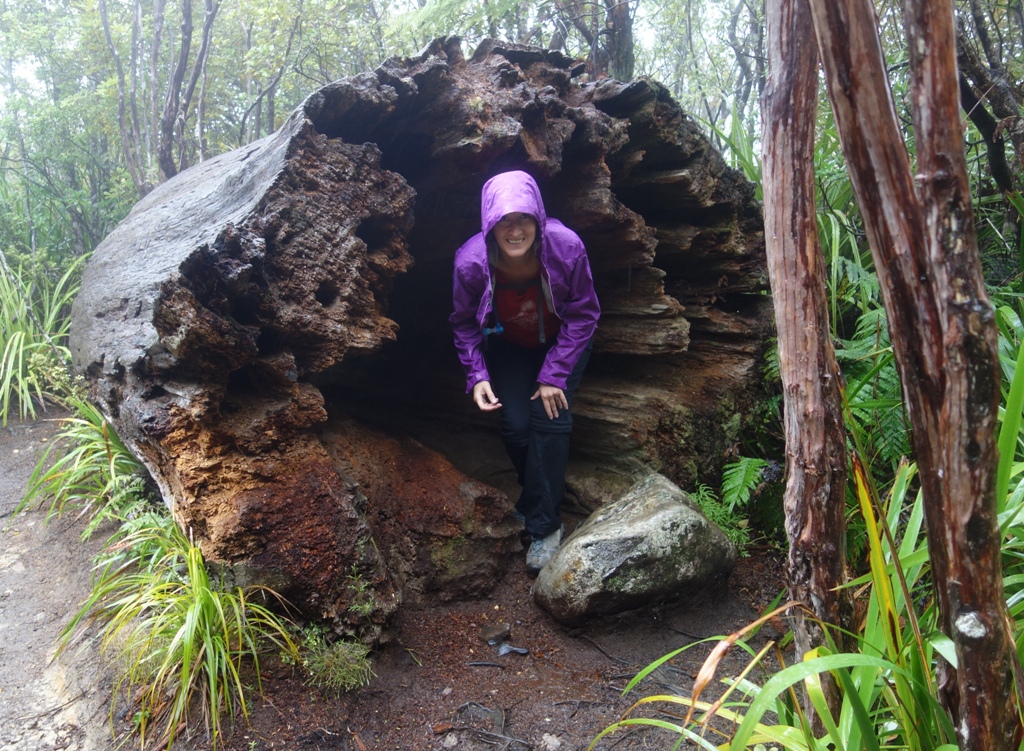 A similar story stands for the local fauna. Prior to human settlement New Zealand had no land based mammals other than some bat species. European settlers introduced a wide range of animals including some specifically for game hunting (like deer and chamois). Then came the rabbit and their rapid breeding. So much that something had to be done about it. So a new species was introduced, the stoat. Which did a great job at eradicating the rabbits. But also brought the local kiwi birds on the brink of extinction. Fortunately there are huge efforts these days to bring back this national symbol.

Coming back to our hike, the trail used to be a pack trail when the Pakeha, the European settlers, were logging out all the Kauri trees from the area. Because of this many of the stones have steps cut into them so the horses could have an easier hike carrying all the supplies. This history is given in a few places where you can still see the marks left behind. The stone steps themselves are quite remarkable when you see them. Thinking of being the person, or horse, that needed to travel this twice a week carrying supplies is equally remarkable. 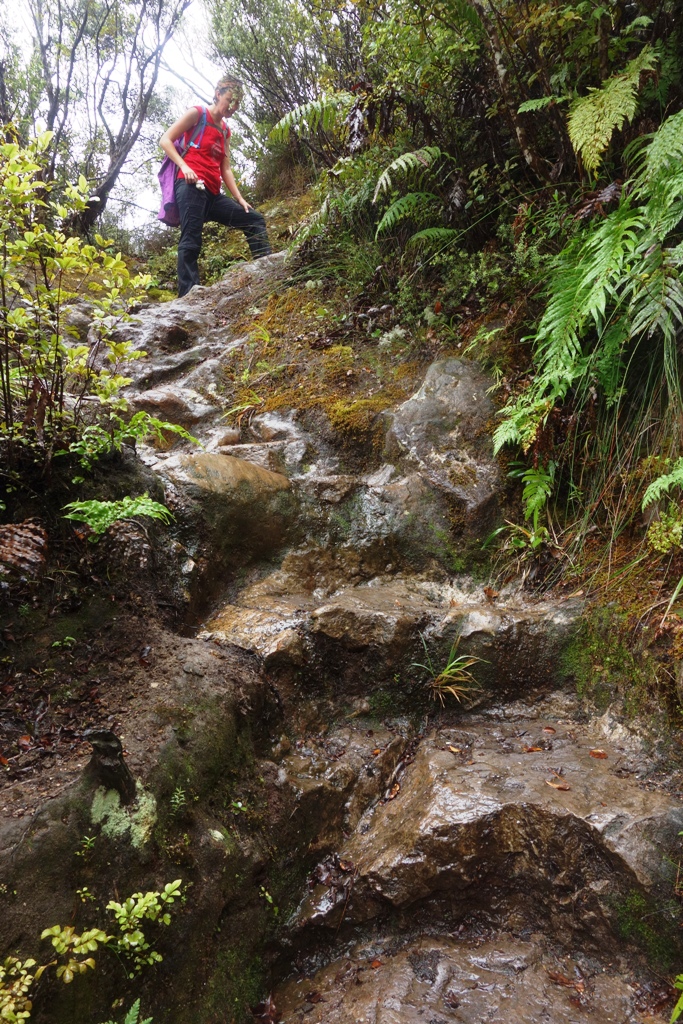 Getting to the top, the clouds had closed in and delivered a bit of drizzle and fog. This didn’t detract from the hike, but it did reduce the views a bit. There is a hut at the end that you can stay overnight if you book it. We took advantage of it and ate lunch inside, next to a fire. By this time the rain had started in earnest. We couldn’t see the pinnacles, even though they were only 100 meters away from us. We decided not to try to climb them since we wouldn’t see much and the ladders that you have to go up on would be slippery. 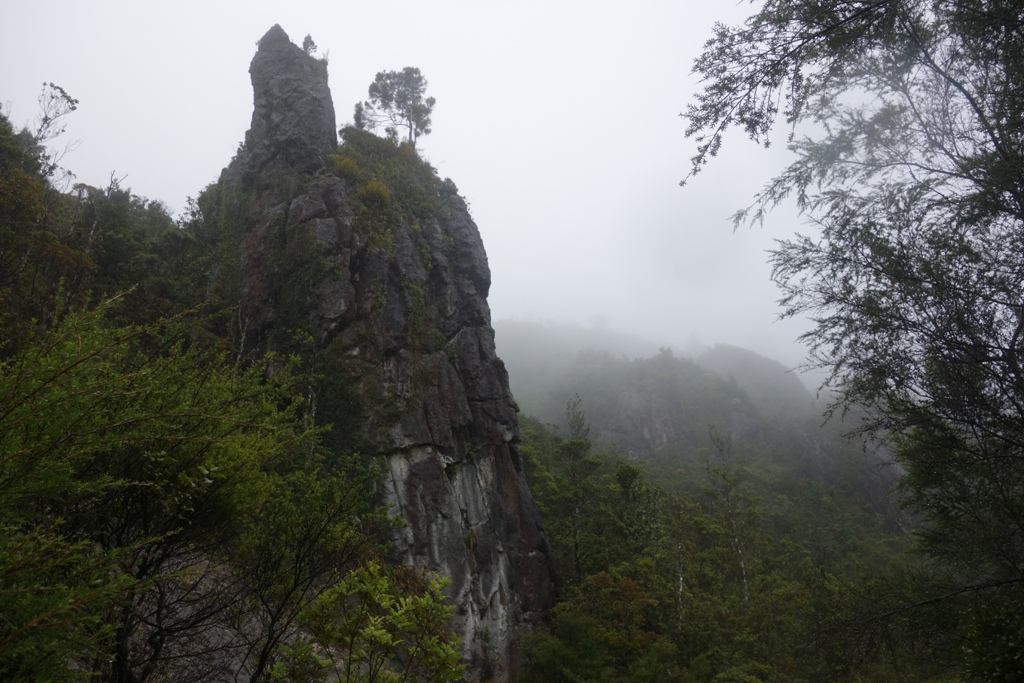 ‘Beautiful’ weather on the way back

The hike down was… adventurous. We took a different route back, following the old logging paths that were used to get the timber off the mountain. The rain was falling in showers for most of our hike down. While at higher elevations, this wasn’t too bad other than making us wet, on the descending trails it was different.  The work that had been done on the trail to move the water off trail hadn’t been kept up. The trails turned into rivers since they were the path of least resistance for all this water. This meant that in places we were knee deep in running water trying to find footing on slick stone and broken branches. We had rain gear with us, so this kept some of the water off us, but dry wasn’t a term to be used for any part of us. Obviously we made it, but it was the most ‘wild’ hike we’d ever been on.

2 thoughts on “Coromandel – Coves and Pinnacles, waves and rain”