When planning for the RTW trip back in SF, I ran into a piece of information that put South Africa on our map: this is the only place in the world where meerkats live. And I had to visit my cousins, after all the Meerkat Manor is my favorite Animal Planet series! So we came up with Mapungubwe Park as a place to go to and see the little creatures. We also knew we want to go to Kruger Park and drive ourselves through the wilderness, enjoy the animals from a meter away. And while reading through Lonely Planet, we found out that the Golden Gate Park has a named twin in South Africa, so we had to see it! We said no to Capetown or any other southern beach location as December is summer holiday and the places are packed.

That still left us with having to cover almost half of the country in 2 weeks. Luckily enough the internet is full of resources and we found one suggesting a more picturesque drive to Kruger Park than what people usually do. Here is what we came up with after adding the other ‘musts’ to it: 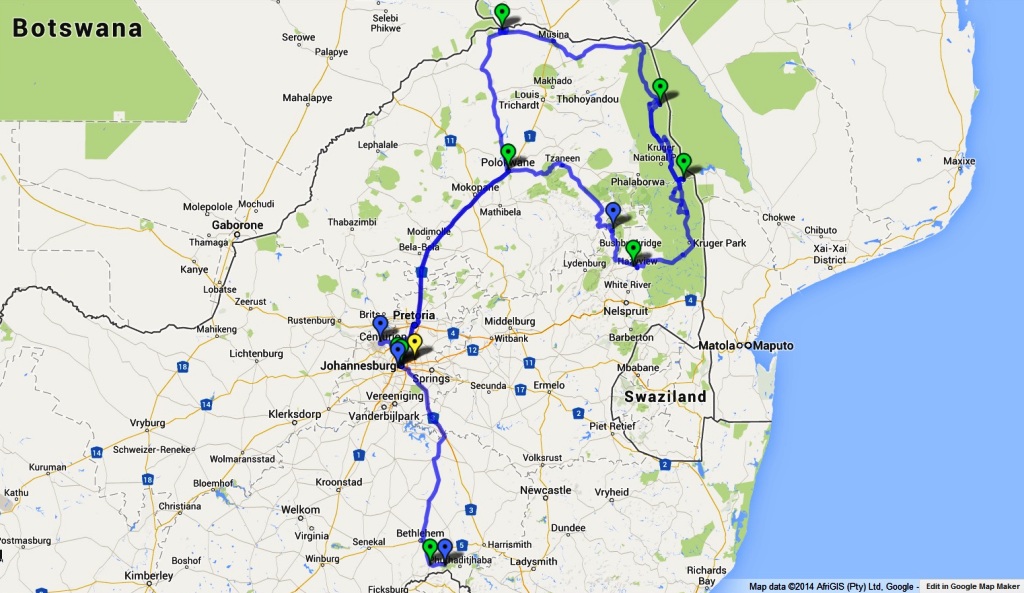 We flew from Dar Es Salaam into Johannesburg and picked up the Thrifty rented car, a Hyundai I10, a small white stick shift that did its job most of the time (besides when you had to pass another car uphill :)) 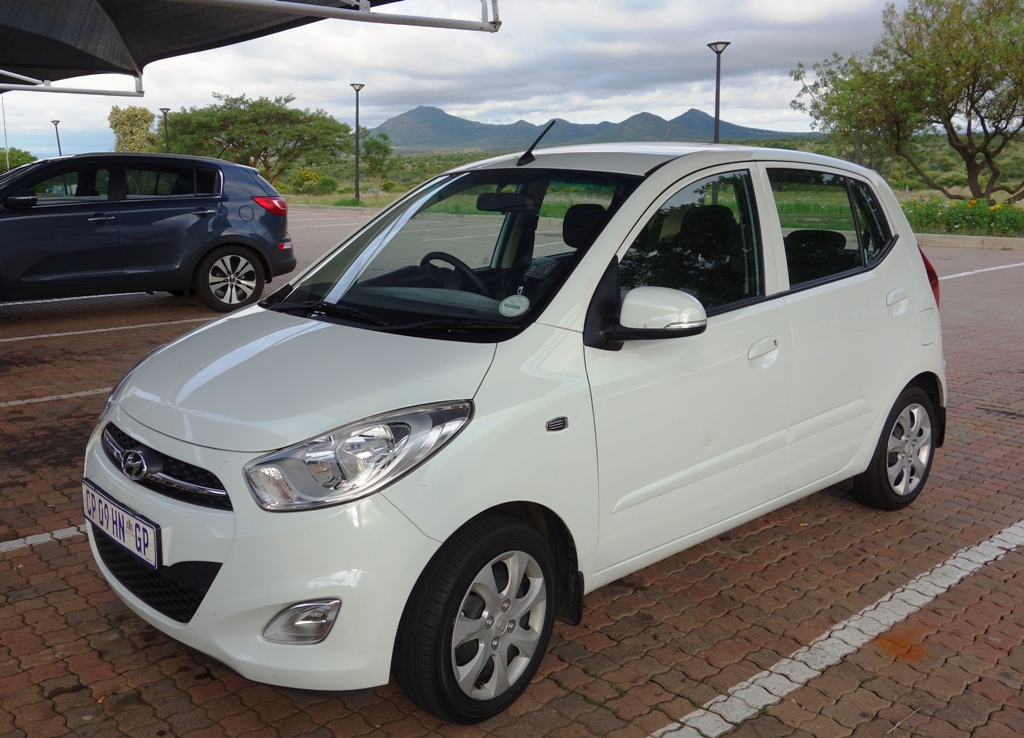 Our little Hyundai I10 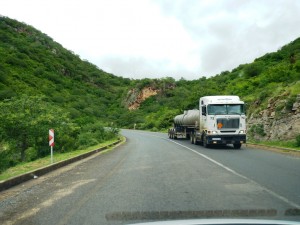 Truck driving on the right left side of the road

Yes, it is disconcerting to see this big truck driving on ‘your side of the road’ just to realize you should keep left and he’s fine where he is. Yes, it is confusing to get into a roundabout and have to look at what’s coming from your right instead of left. And yes, it is scary to sit in the passenger seat and jump of your chair asking yourself ‘where did the wheel go? Oh, I am not the one driving…’
But otherwise, as long as there are other cars on the road you will always know where you need to be driving.

Sleepy Gecko Guesthouse  was our home away from home for the 3 (separate) nights we spent in Jozi. The drive from the airport was easy until we got off the highway and realized the streets do not have name tags, so finding our way to the place, while it was getting dark proved to be a bit challenging. The good part is that this made us have to use our Garmin gps device (a bit ignored until then) and realize how a good friend it can be in times of need. The world maps it comes with are very accurate and it has POIs spot on. Plus you can track and save your trips, see what altitude you are at, know what time it is even if you don’t like wearing a wrist watch, and so on.

The next day we visited the Apartheid museum in Johannesburg. Then we drove to Polokwane  through Pretoria and stayed at The Plumtree Lodge and then to Hazyview, with the overnight at Idle&Wild a macadamia nut plantation that also offered lodging and river rafting and quad bikes adventures.

This day was what we picked this route for. The Motlatse Canyon proved to be what it was advertised as: beautiful, colorful, most impressive. The road to get there is not the best ever and it definitely takes you longer than driving on the highway, but the views are spectacular and you get to see pristine places that often get ignored by tourists. 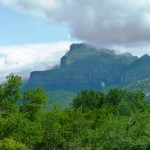 On the way to Motlatse Canyon 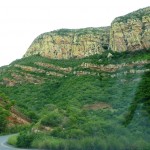 Good i was driving, so i wouldn’t get sick from the curves 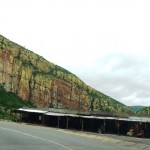 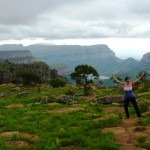 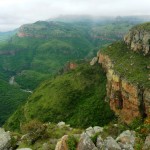 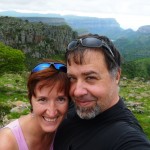 Our fav type of picture to take – ourselves

That evening we got to check what everybody kept telling us since we got to SA: the steak here is reeeeally good. And at half price of what you would pay for it in San Francisco. 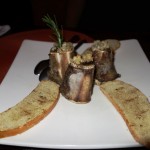 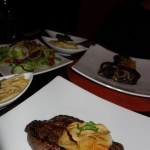 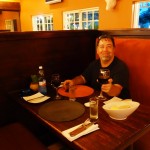 We spent the next 5 days in Kruger park and then, after a relatively short drive through the Northern park gate and Mussina, 2 more days (and Christmas) in MNP.

Another full day of driving brought us back to Jozi, and a dead Melville; the day after Christmas all restaurants and stores are closed. We still found a full of life bar with live music that had some beer and salt and pepper calamari to share with us.
Clarens was our next destination, and after half a day of roaming through the Golden Gate Highlands we called off the day and chose one restaurant from the plethora available to clench our thirst and have some good food. The Red Mountain House was our B&B that night.

On the way back to Johannesburg (for our last night in South Africa) we stopped at the Cradle of Humankind and visited the Sterkfontein Caves where the oldest human remnants on earth were found. Mrs. Ples is a 2 million years old skull found while the caves were still limestone mines. Well, later research challenged the sex of the skull; the not yet developed wisdom teeth might actually mean that it was a young male instead. They still call it Misses Ples thou…

A side note on the S African roads: be smart and get the extra windshield and tire insurance when renting a car. You will find out why as soon as you will drive off the highways. If you are lucky enough you will see a sign ‘Beware! Potholes for the next X kilometers’. If not, you will see a white triangle with an exclamation point on it. You will wonder what it is until you will have to slam your brakes and slalom through some bottomless holes in the middle of the road. Hey, at least they have them marked one way or another. Which also makes you realize how old the potholes are and that roads are not being planned for repairs either. Also, gravel roads are marked as national roads, so don’t be amazed if Google directions will take you on some off-roads to get you from one place to another. Imagine you are still in Kruger, keep driving, don’t think about flat tires and you will soon find yourself back to a paved road. And don’t get scared if while you are in the middle of nowhere you ran into a big Road closed sign, and the road is being blocked. You might get lucky like we did and find a kind soul driving a car passing by to stop, find out where you need to go and let you follow him through private banana and tomatoes plantations on the other side of the closed road so you can continue your trip. By the way, the plantations were Dole, and the bananas were just waiting to be picked up and sent to Europe.