Leaving Rotorua we were headed for Wellington so Mihaela could search out some LotR filming sites. Instead of pushing through to Welly, we decided to take a scenic route around the east cape of the northern island and then through Napier, a quaint Art Deco town on the east coast. The east cape area is remote for the north island and not on the track for many people descended from the European Settlers. Most of the inhabitants of this area are Maori and the area hasn’t been developed the way much of the north island has been. This means that the coast is more natural in appearance and there aren’t as many interruptions from people.

Driving out from Rotorua, we headed for Opotiki and onto highway 35 which goes along the outside edge of the cape following the shoreline. We were warned ahead of time that the route between Opotiki and Gisborne didn’t have many services so we filled up and bought the makings for a picnic lunch, then headed out. We also set out early because we were also told that 300 km is a healthy drive for one day in New Zealand because of the twisty two lanes roads and the scenery. We learned in Coromandel that this is pretty accurate.

This area is stunningly beautiful. The drive alternates between drives along beaches strewn with driftwood and climbs up a couple hundred meters that open up to wide vistas of the shore line ahead or behind you. Stopping at a beach we are awestruck watching the crashing waves and wondering how much fun the birds are having playing in the wind. 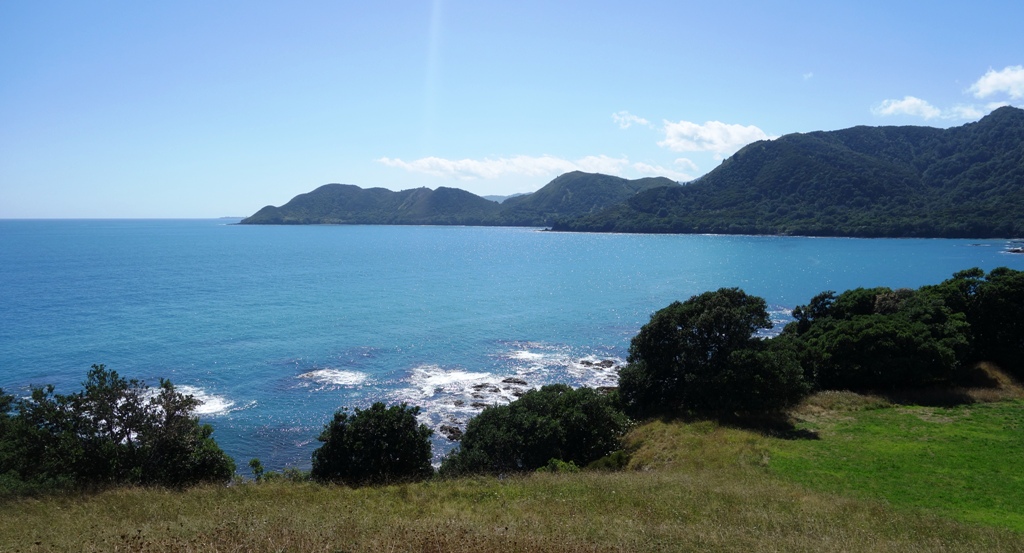 Wide vistas of the shore line

We took a lunch break at Te Araroa, the little town closest to the point of the cape. This sleepy little town is one of the first to see the new morning each day since this is the most east you can go in New Zealand and with New Zealand’s proximity to the international date line, this is saying something. Sitting on the rocky beach, listening to the surf, watching the water and the clouds and the sun, all of these left us both quiet for awhile in admiration for where we were. 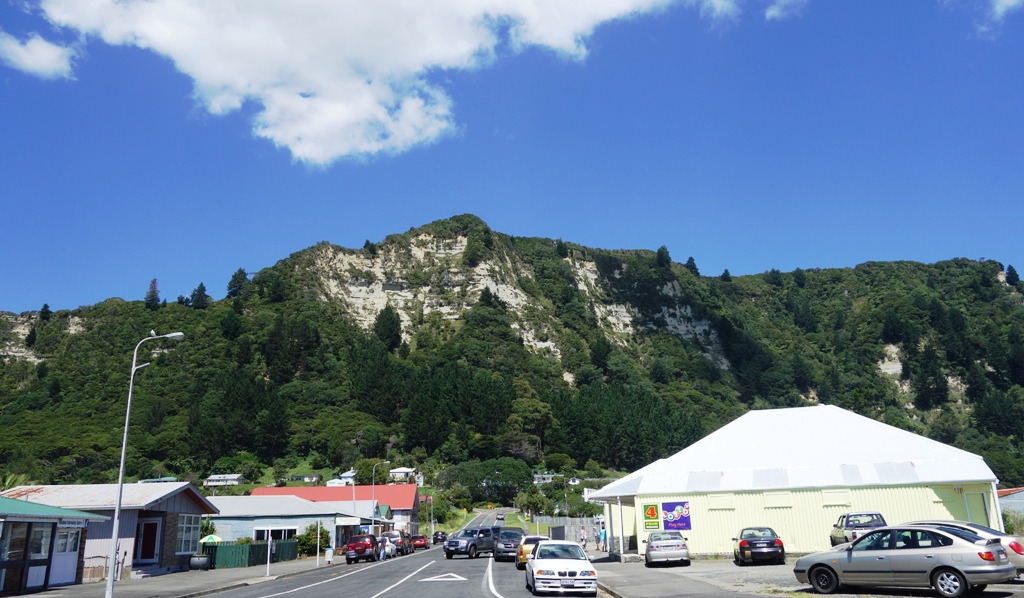 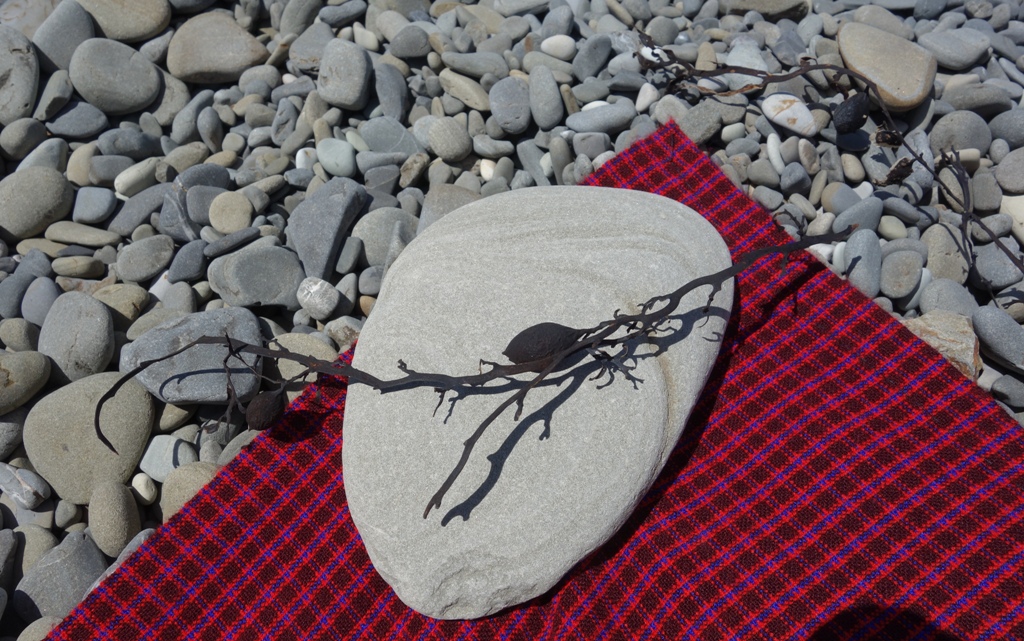 On the beach on East Cape

Driving down from Te Araroa, the road turned inland away from the coast. The views change from wide ocean stretches to hills and valleys, green with life. The day we drove we had a mix of sun and clouds which gave great changes in the light and the scenery as we progressed. 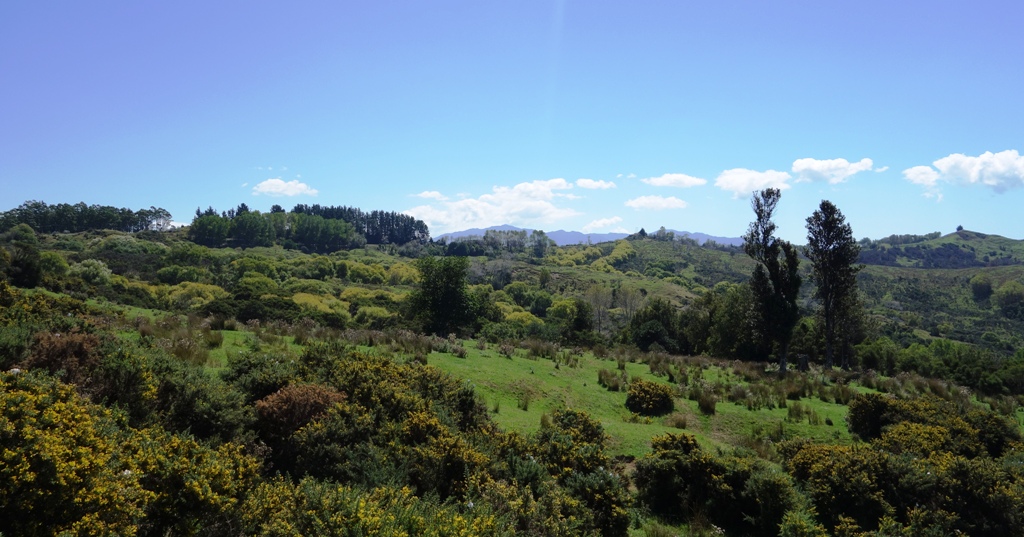 We stopped at Tolaga Bay and took a walk on the old pier there. It’s about 800 meters out into the bay, reaching deep enough water that big ships could land. Before the pier, farmers would drive their horse and carts into the water deep enough that a boat could pull up near it and load the wool and other goods from the cart to the boat. Then the boat would make it’s way out to the ships moored in deeper waters. Sounded like a rough way to get wool to market. 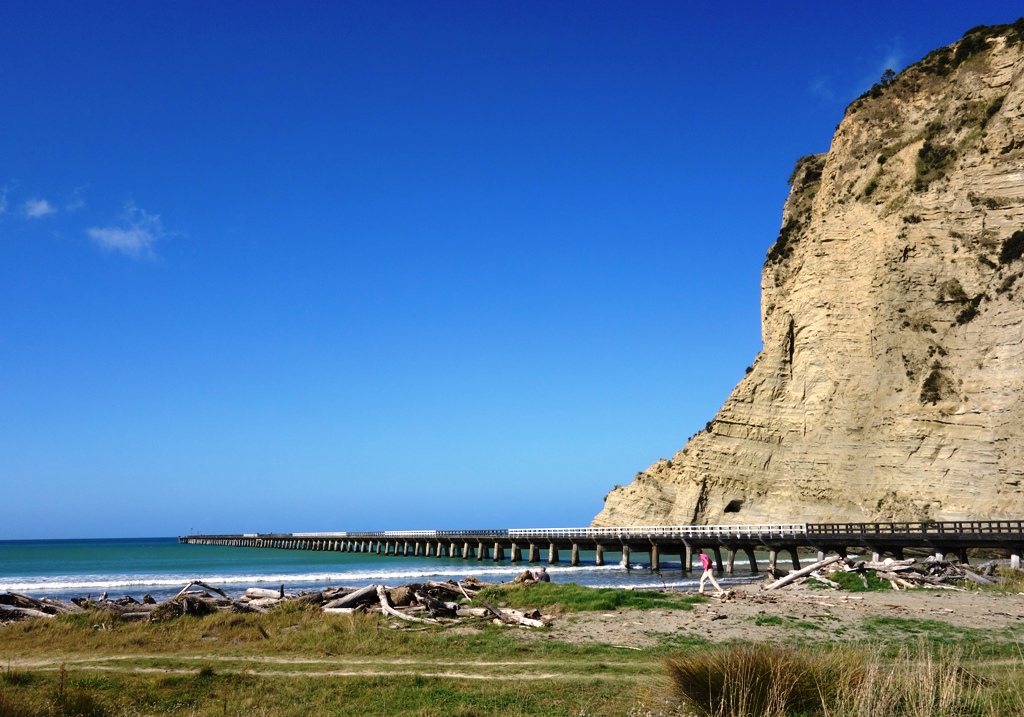 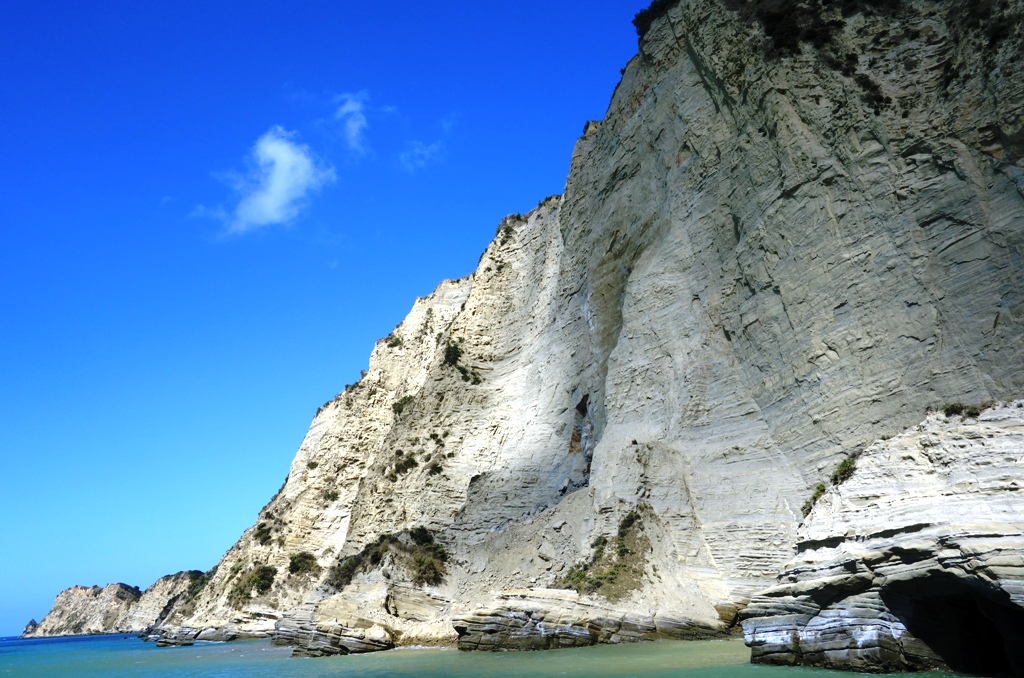 We spent the night in Gisborne, bringing an end to an awe inspiring day.  One thing Gisborne is known for is being the place where cook first landed in New Zealand. His visit started well at the beginning as both the Maori and the sailors were interested in each other, but it didn’t end well. Cook and his men misunderstood the taunts the Maori use and the interchange turned bad. This is why he named the bay ‘Poverty Bay’ since they were not able to replenish their stocks here.

Captain Cook and the story of his 3 voyages in Gisbore, his first land touch in new Zealand

The next day we drove from Gisborne, across Hawke’s Bay, and down into Napier. This drive was more pastoral than yesterday and beautiful in a different way since we entered the Hawke’s Bay wine county. Here wineries and working farms mixed together displaying a wide variety of the arable farming practices that New Zealand employs. We didn’t do any wine tasting in this area, but we kind of wish we had made time for it. 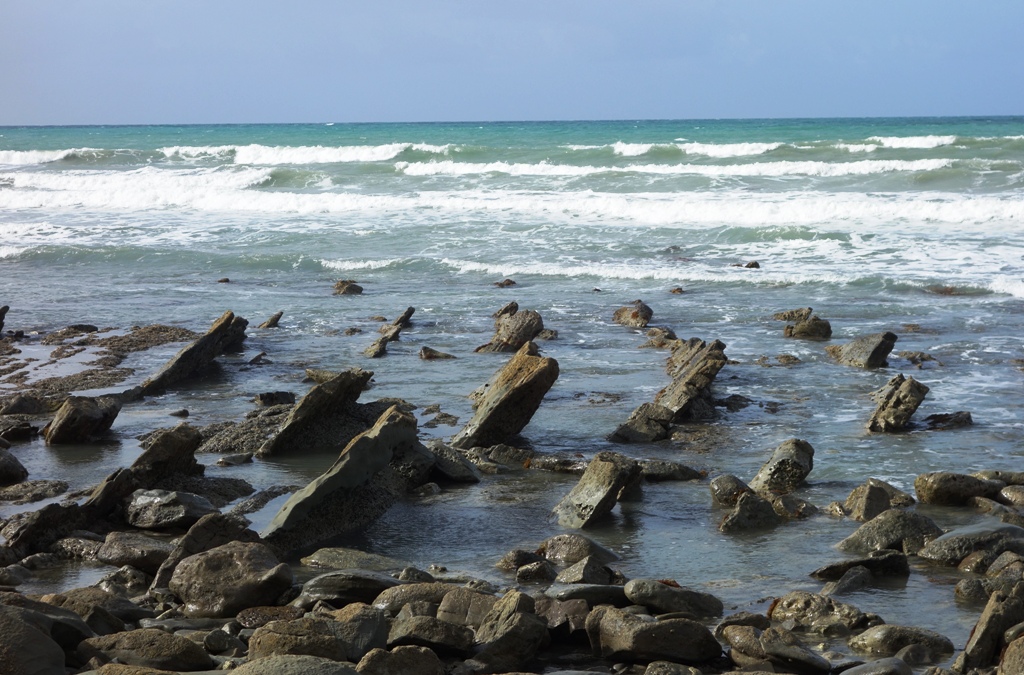 The teeth of the whale…wait whales don’t have teeth 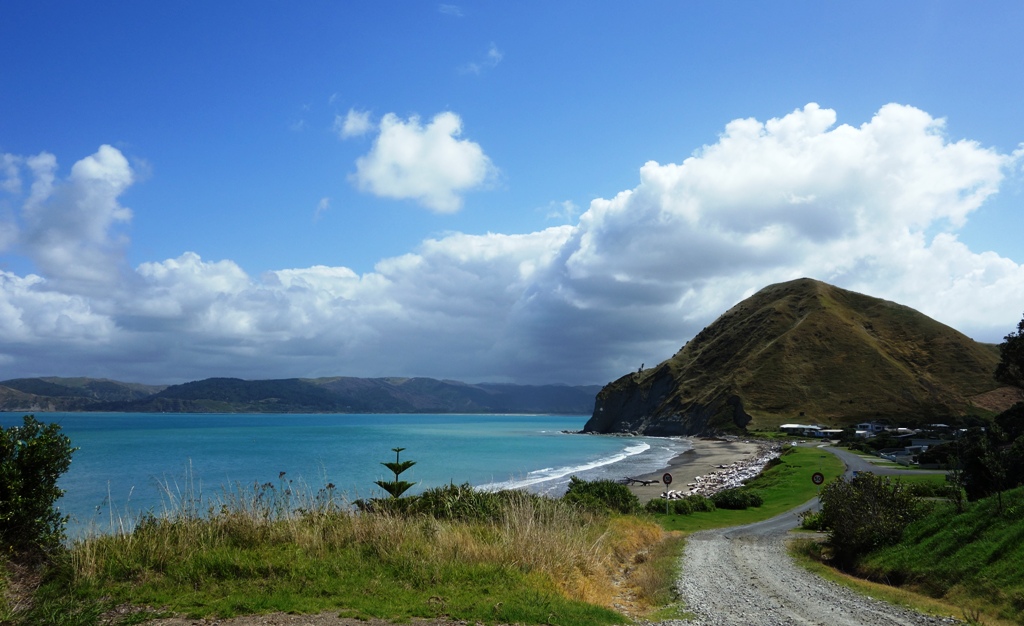 We did do a couple side trips though, our favorite was up the Wairoa river to where the Raukituri and Hangaroa rivers join together and form an impressive waterfall. 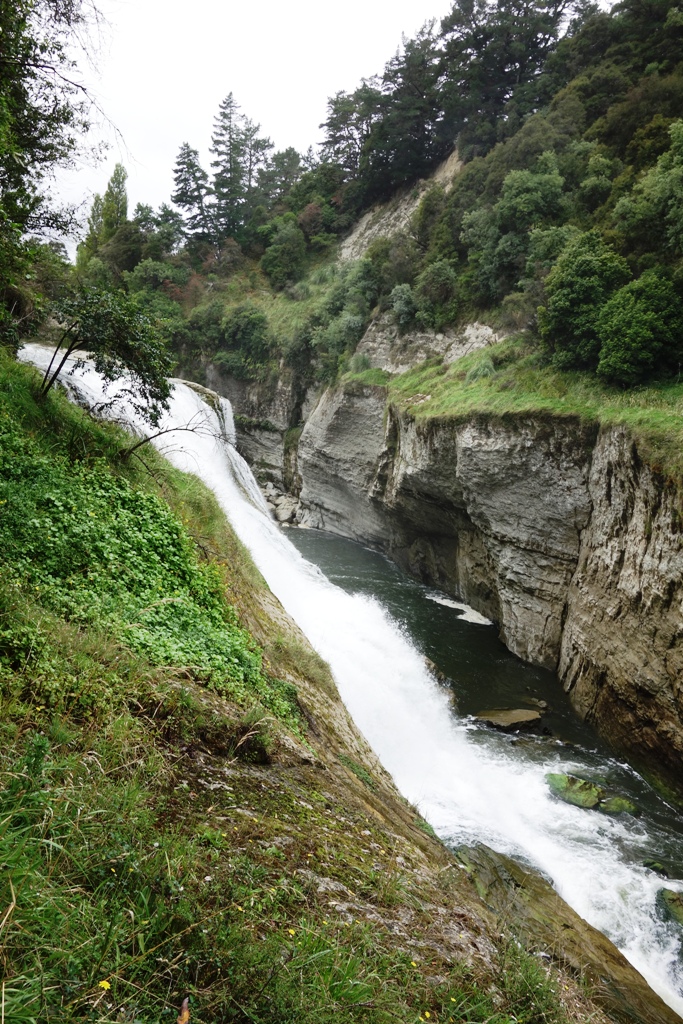 We ended our trek in Napier, a town know for its Art Deco architecture. In 1931 there was an earthquake in the Hawke’s Bay area that razed Napier. Most of the town was rebuilt in the art deco style popular at the time. Since then, enough of the buildings have been maintained for the area to keep a significant Art Deco feel to it. This is a very popular weekend get away spot because of the wine, sun and quaint town. 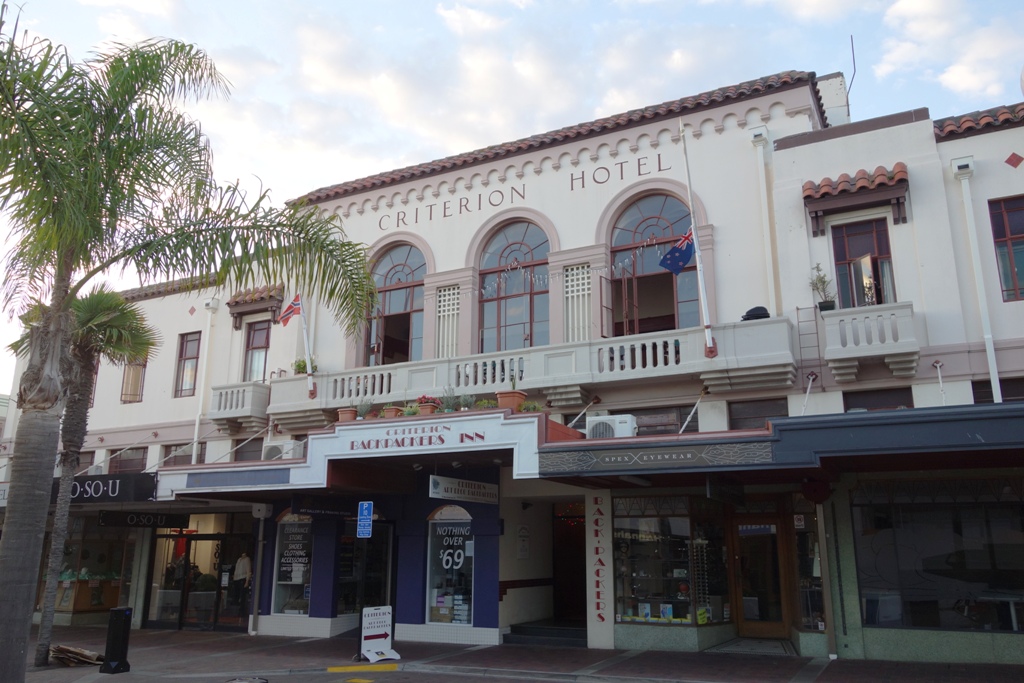 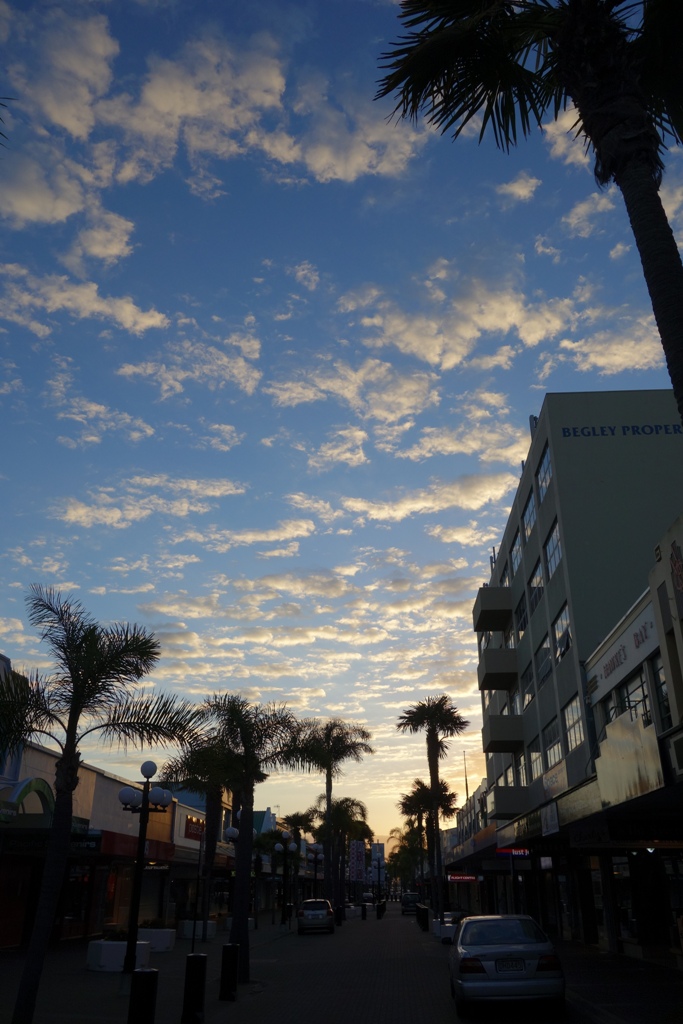