The last place we visited in Vietnam was Hanoi. For us, like many tourists, it is a hub city, big and sprawling with lots to offer on it’s own and used as a launching pad to nearby points of interest. We used it to get to Sapa and Cát Bà which you can read about in their respective posts.

Our time in Hanoi was a bit of a respite from sight seeing and more just living in a city for awhile. Hanoi is deep with history. Heart of the north, home for Ho Chi Mihn and the revolutionary government, capital city of today. It’s a bustling city with influences from around the world. You can feel the Chinese, French and American influences as you look around you. The architecture, culture, way of life, all have a definite Vietnamese feel, but the people have readily adapted outside influences into their lives.

Walking around the city is intimidating. Like most big cities, there is a large, vibrant population who live their whole lives here. The flow of the city is fast even if the pace of life isn’t as fast or hectic as some cities of similar size. The traffic is mostly scooters and motos going in every direction possible and it doesn’t stop even if there are signs saying so. A big adaptation westerners need to make is that traffic rules here aren’t the same as to what you’re used to. Thinking ‘I’m following the rules, I’m right’ will most likely cause an issue. Rules are more guidelines than hard constraints. They are flexible and will be pushed in every direction they can be so that different people with different objects can all reach their objectives.

From the outside this strikes most western tourist as mad chaos. Motos going in both directions at the same time, 4 to 5 across, in never ending lines and no obvious way to have a pedestrian cross. When you enter the fray and start to cross a street you sometimes just want to run or stop. But sudden changes, forward, backward or stopping, are also most likely to cause an issue. It’s scary. 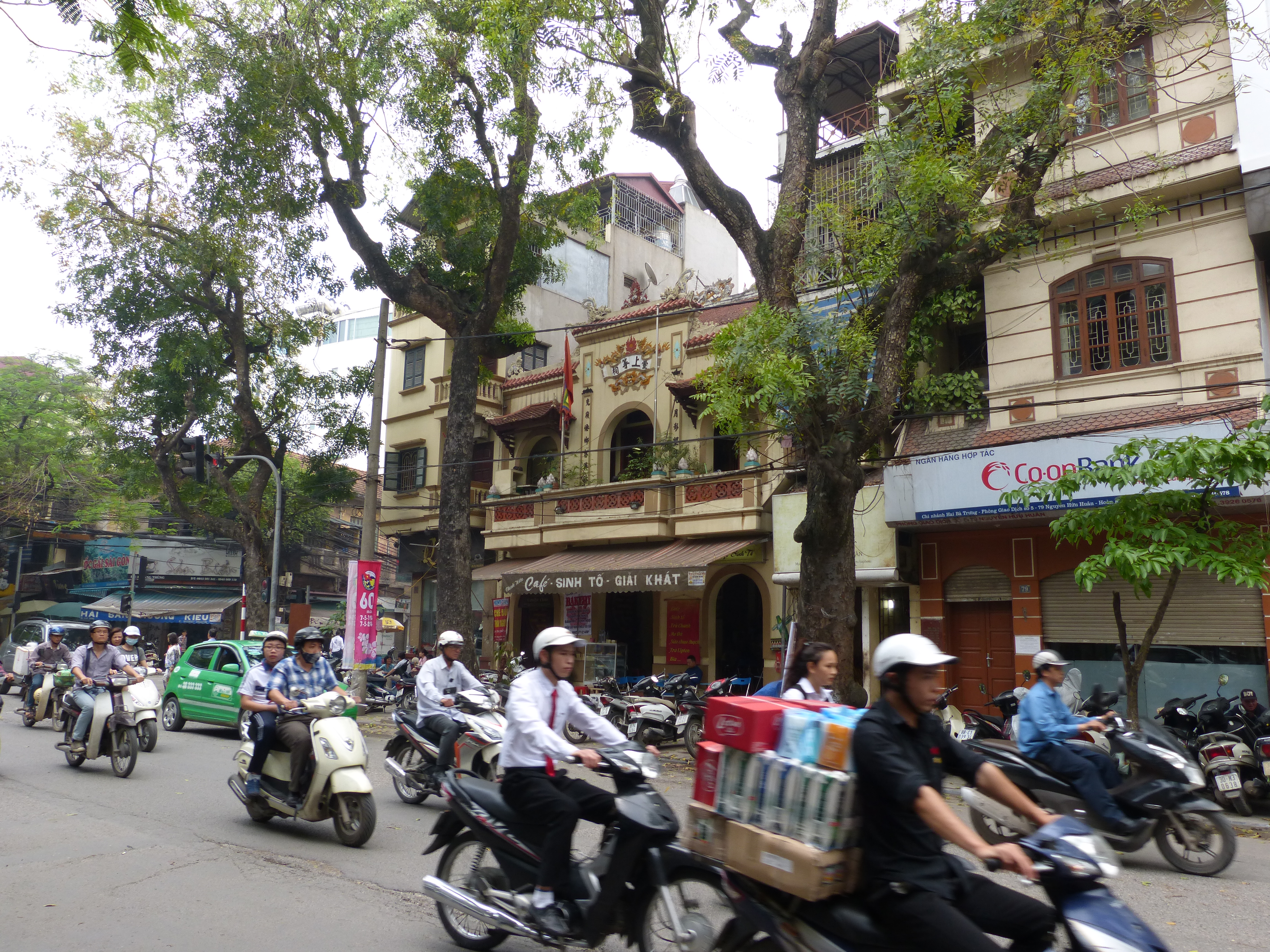 Traffic in Hanoi on a not so busy street

Now, there are some unspoken rules that make the whole thing a bit more understandable. First, if you’re bigger and/or faster, you have the right of way. Second, if you make your motions slower, predictable and smooth, you can integrate easily. There’s no ‘American’ habit of barreling down the street thinking others will get out of your way. (I’ve seen this isn’t just an American habit anymore.) Keeping this in mind, and some bravery in your heart, you can get around with little issue.

We stayed near Hoan Kiem Lake in the old part of the city, in a place called Madam Moon Guesthouse. I think the name added to the mystique of our visit to this city. 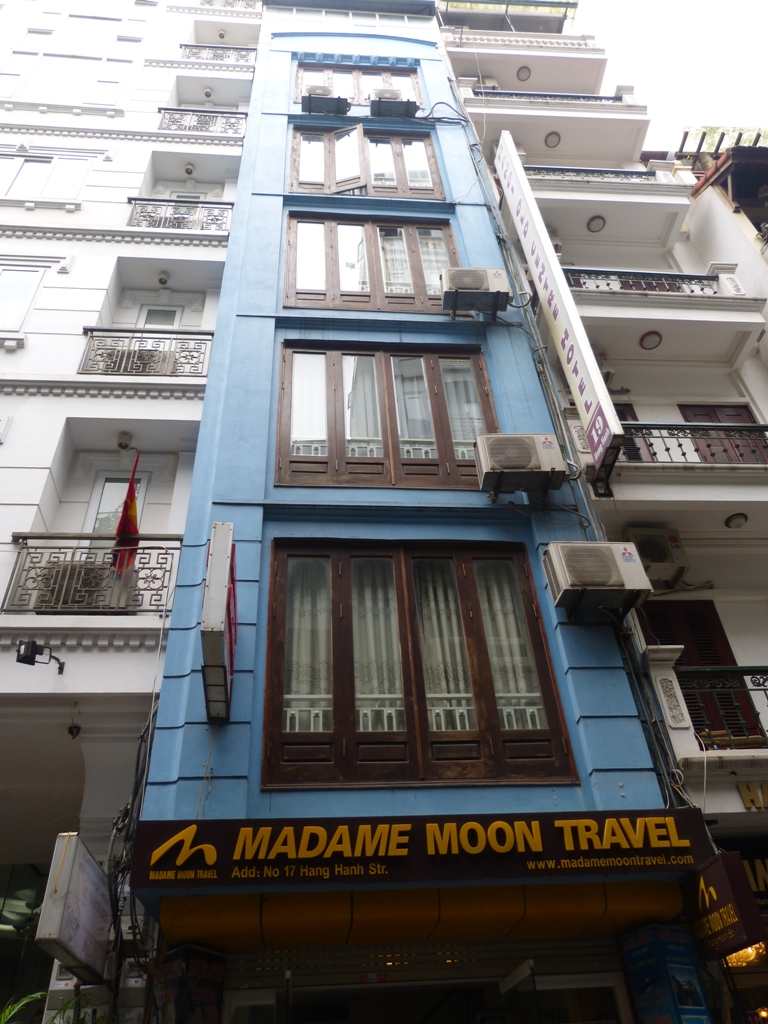 It was a simple, inexpensive guest house that was positioned well.Easy to walk to many areas of the city and easy to find something to eat close by. It was very convenient to take afternoon strolls along the lake side with the other young and old couples enjoying the day. We tried to find the great old turtle(s) that were in the lake, but we weren’t lucky. We also took longer walks, like going over to view Ho Chi Mihn’s embalmed body or visit West Lake, another neighborhood in the city. 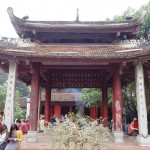 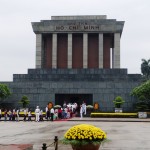 Huu Tiep Lake and the Downed B-52 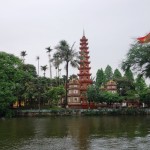 As we’ve said in other posts, Vietnam is a place that has redefined the idea of a restaurant for us. Hanoi is an epicenter for street food. There are what we are used to as restaurants, with an interior space, table seating, etc. These were almost exclusively the realm of western tourists though. Rarely did we see a Vietnamese patron eating at these places. Instead, most of the streets have little plastic tables and chairs set up along the side with various street vendors selling their goods from their portable kitchens. 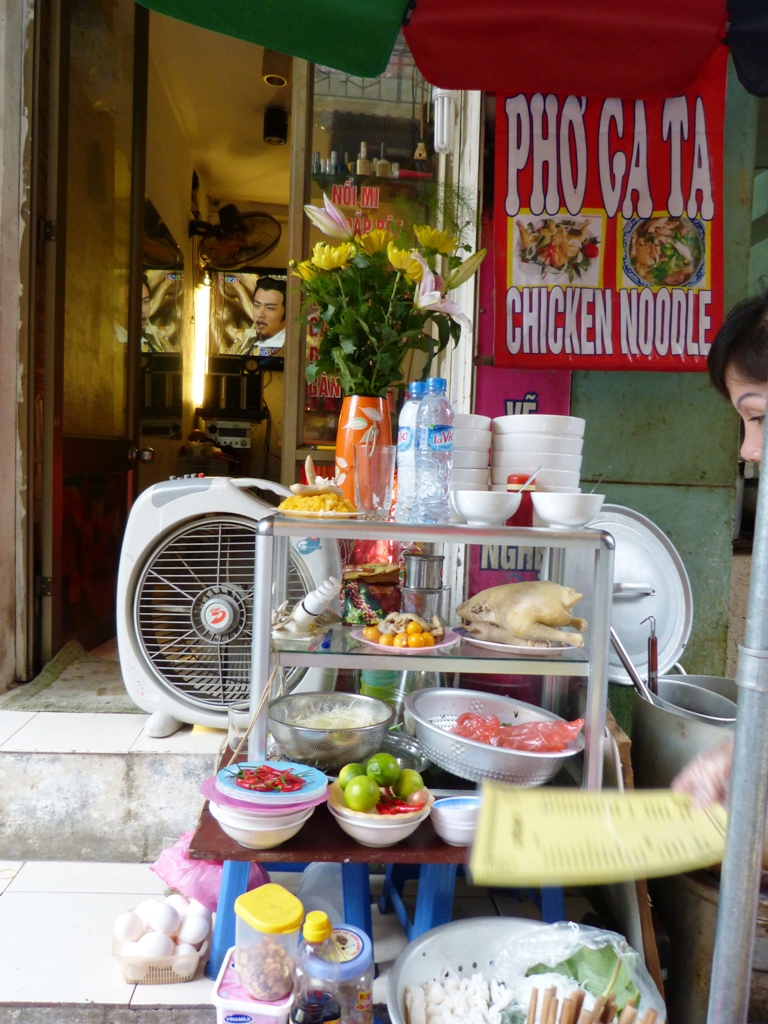 Little stall where you could get Pho from

It’s hard not to rant on and on about the street food here because it’s just so good and so varied. There are a ton of dishes that are so tasty I am not sure why they haven’t spread further. There are also a number of dishes that are a bit strange to our tastes. Cho for example, aka dog. Not something we wanted to try, but something really enjoyed by some of the people here. Roasted and treated similar to pork, many find it a delicacy.

Here are a few dishes we think are must try dishes when visiting Vietnam. First and foremost, get the Banh Mi. It doesn’t really matter where to go other than figure out what you want in it. There is a variety of choices you have, usually with the protein you want in the sandwich. Pâté is a standard option at many places. They have vegetarian options at some places. I prefer the grilled fatty pork filling for my Banh Mi, with a good amount of fresh herbs and whatever that pickled thing stuck in it was. I loved them so much at one time the vendor slipped up and dropped my sandwich on the street. She deftly picked it back up like nothing happened and handed it to me. I didn’t bat an eye, just took it, thanked her and enjoyed the deliciousness. 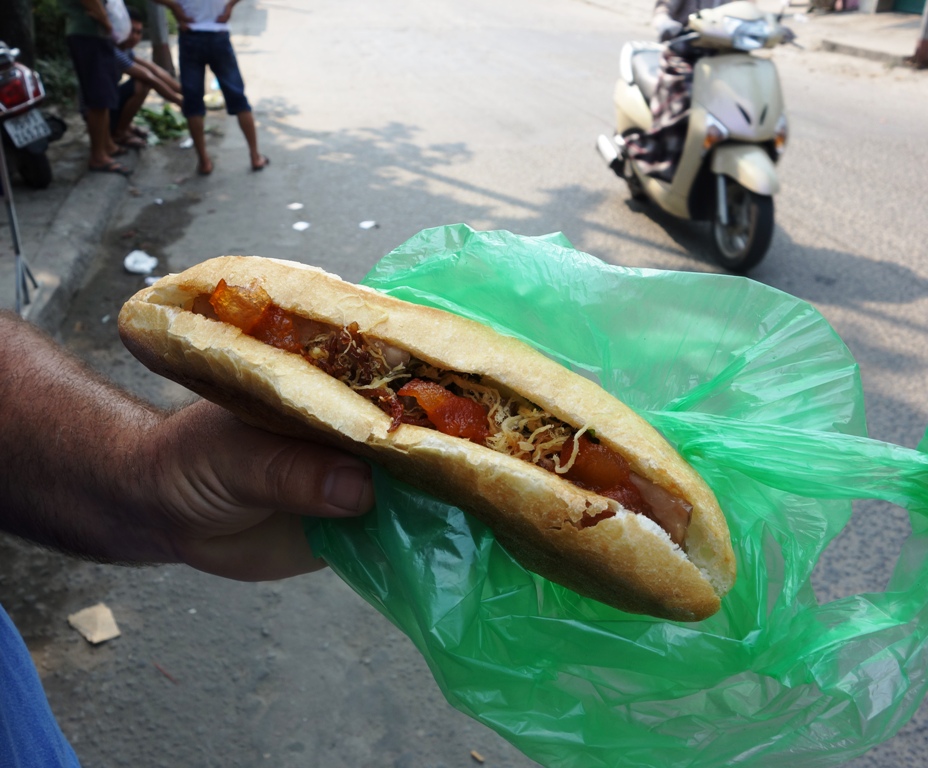 We both thoroughly enjoyed the various Pho we had. Pho Ga, or chicken noodle soup, is a standard option for breakfast. Pho Bo, or beef noodle soup, is a great snack, lunch, dinner, just about anytime you’re hungry. Mihaela found a place that did Pho Ga and would include undeveloped eggs if you wanted. These were mostly yolks that hadn’t been served up by the chicken yet. She thoroughly enjoyed them! 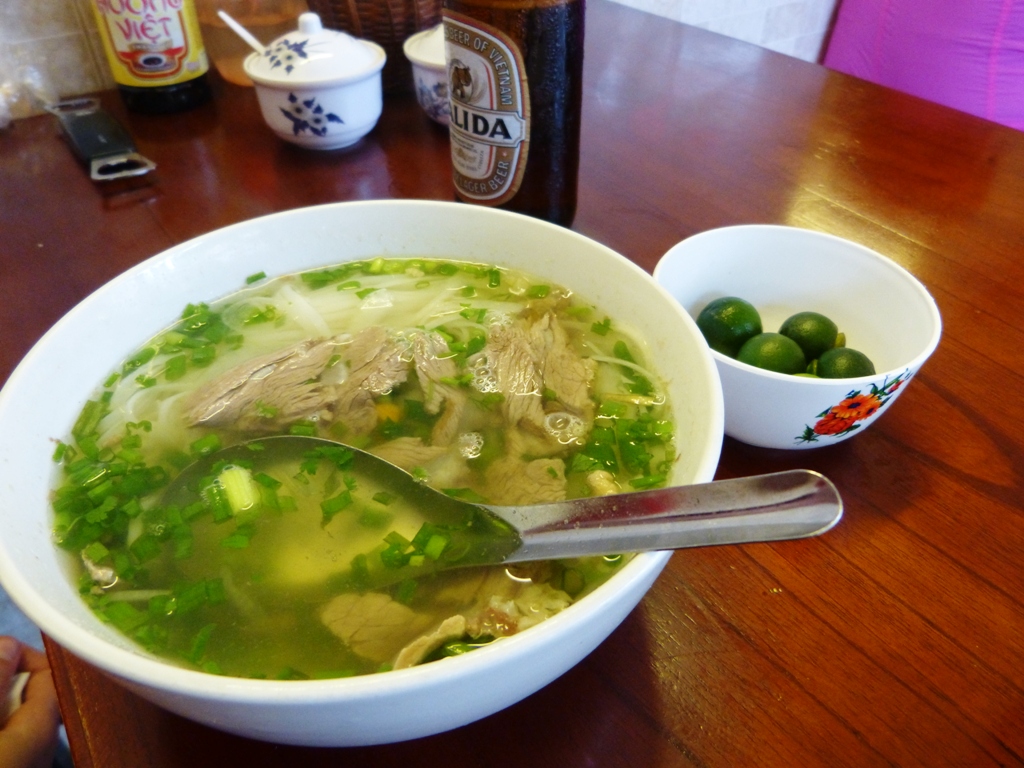 The ubiquitous Vietnamese fresh spring roll is a must. I’m pretty sure Mihaela ate about 1000 of these in our time in Vietnam. (Ok, she just told me she didn’t eat 1000, just 998 because I ate a couple.) The rice paper wrapper is so thin and transparent you can see the fresh basil, shrimp, thinly sliced pork and cellophane noodles inside. A little fish sauce and your favorite spices and you have a great dip to go with it. 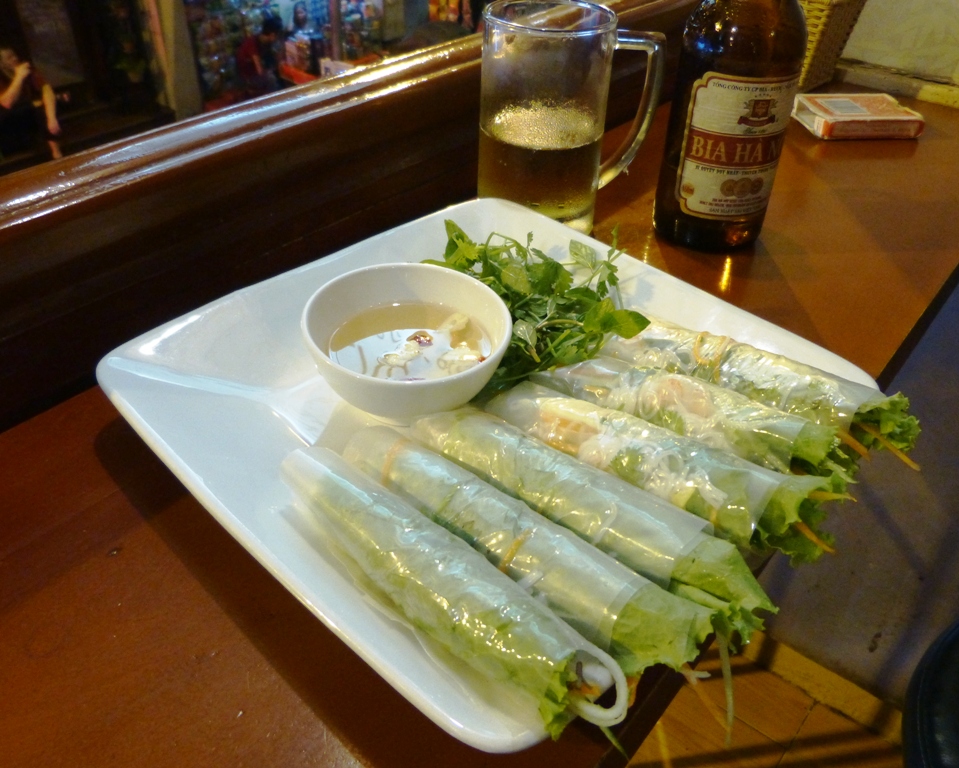 Another delectable is the Bun Cha, grilled pork and noodle soup. It’s a little spicy,  a little sour and smokey tender pork goodness. It is a lunchtime standard. You can see and smell the vendors grilling up their stock just before the lunchtime crowd descends on their shop. Billows of smoke fill the street as vendors fan their grills, place the skewered pork patties on the fire and roast away. 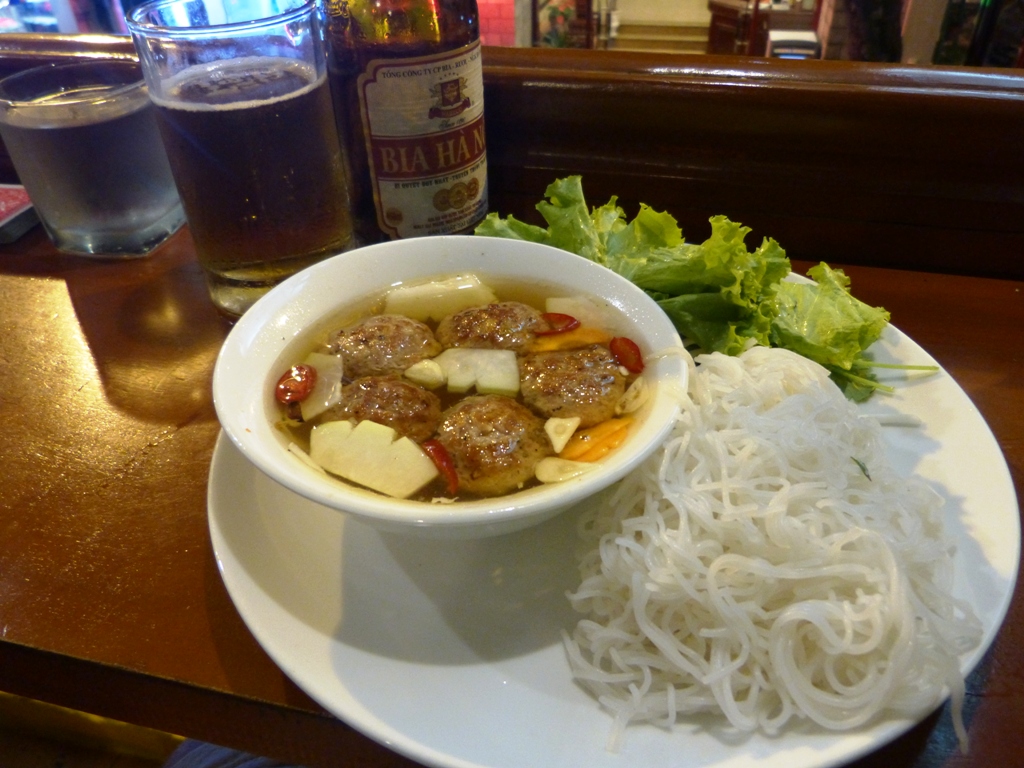 The last food thing I’ll write about here is more of an afternoon, heat escaping adventure than a pure food item. As I wrote to my friend Sarah about this one, it was a hot day, close to 40 degrees Celsius. A typical humid day in Hanoi. We were in search of a place to sit, rest our feet and have a cool drink. After walking around, looking for ‘egg coffee’ we find this little cafe, where we have to walk through a shop and into a court yard of someones house. There a girl, 15 or 19 or
maybe a woman of 25, I can’t tell, as she hands us a menu. We look though the list and try to order a couple things, all resulting in ‘out’ for all of them. After being told ‘no’ to anything we choose, we find they have coffee yogurt and egg coffee.

She then points us up the stairs… into the house? No, no, not into the house. We go around the family shrine to a circular staircase that goes up, and up, and up. We end 3 stories higher on a roof balcony, where we find some shade and a little table that looks out over the Hoan Kiem Lake. 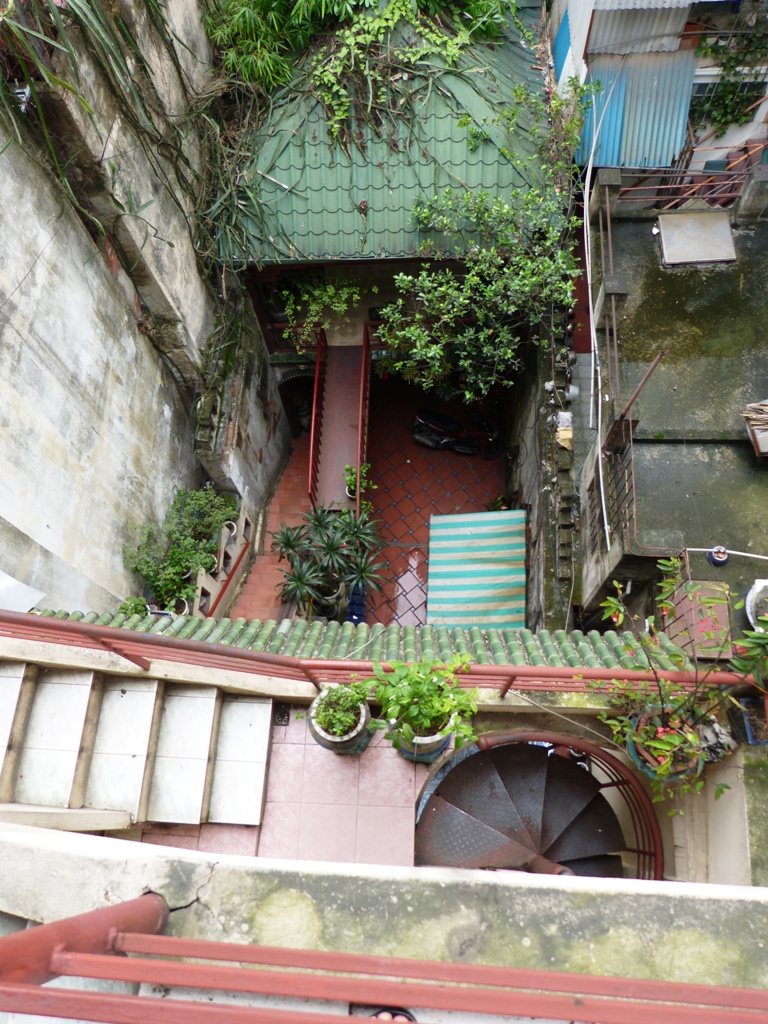 Intricate way to get to the cafe, hard to find if you don’t know it’s there already 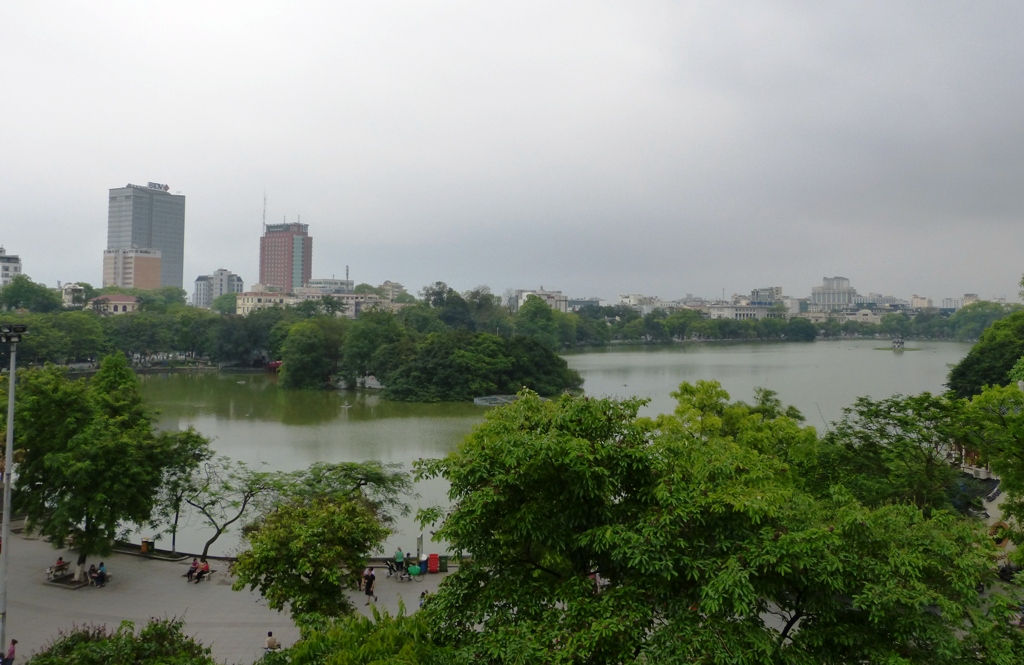 We settle ourselves and just soak up the sights. This isn’t too far from our hotel, but you can’t see it from here. There are a number of tables and most are filled. It looks like others have had the same idea as we have. A few minutes later our beverages arrive. Both are very, very tasty. Both are new to us. The egg yogurt is like a shake made with Greek yogurt and Vietnamese coffee. It’s sweet, sour. strong coffee flavors compete with the sourness of the yogurt. It is so tasty! The egg coffee has become a favorite of mine. It’s made with Vietnamese coffee, sugar and an egg yolk. Thick, rich, sweet, cold, strong. 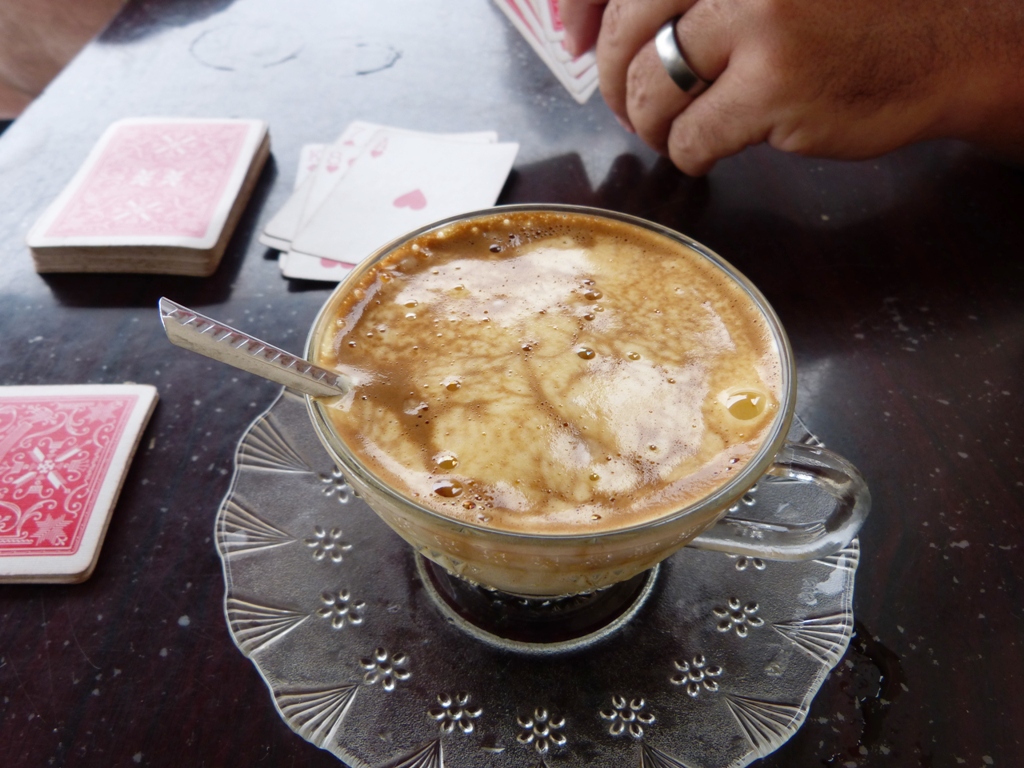 One thought on “Ha Noi – Heart of the north Vietnam”