Another fun stop we had in Vietnam was Huế, the former imperial capital of the Nguyễn Dynasty. Huế filled this roll until 1945 when the emperor abdicated in favor of Ho Chi Mihn’s revolutionary government. It’s situated on the Perfume river, with the old city and historical citadel on the north side of the river and the new city on the south side. It’s a walkable city, but because of the heat you might want to take the cyclo offers (a three-wheel bicycle taxi) up now and then.

The way to Hue was interesting in itself, as we decided to rent a cab and drive over the Hải Vân Pass, an approximately 21 km long mountain pass between Da Nang and Hue, on National Route 1A. Historically, the pass was a physical division between the kingdoms of Champa and Đại Việt. There is also a much shorter route through the Hai Van Tunnel, a mere 6 km drive, but in taking that you would miss amazing landscape and views from above the clouds. As the name of the pass suggests (it literally means ” Pass of the ocean clouds”), there was a lot of haze around, but we were still amazed by what we saw. The pictures do not do it justice. 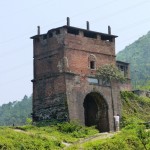 Hai Van Pass – a war station, with bunkers on the surrounding hills 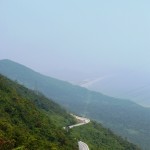 A glimpse of Lang Co Beach

When we got to Huế, we found out that we were lucky enough to have picked our stay there during the Huế Festival, which happens every other year. This meant there were a load of people in town and many many events going on. 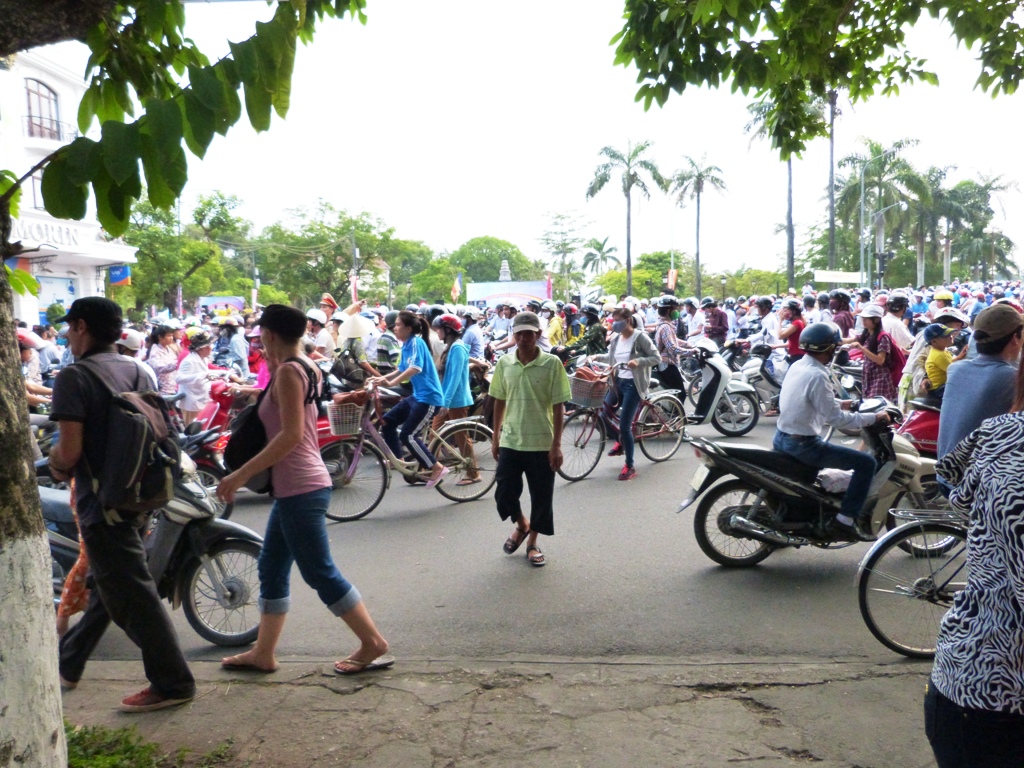 The purpose of the festival is to celebrate the local heritage of Huế and also celebrate cultural differences. This is done through a number of public events of various size. There were art displays, music performances, fashion shows and an imperial night at the citadel where, for one night, they revive the courtly presence that was here when the emperor was around. We were so fortunate to be here for the festival. 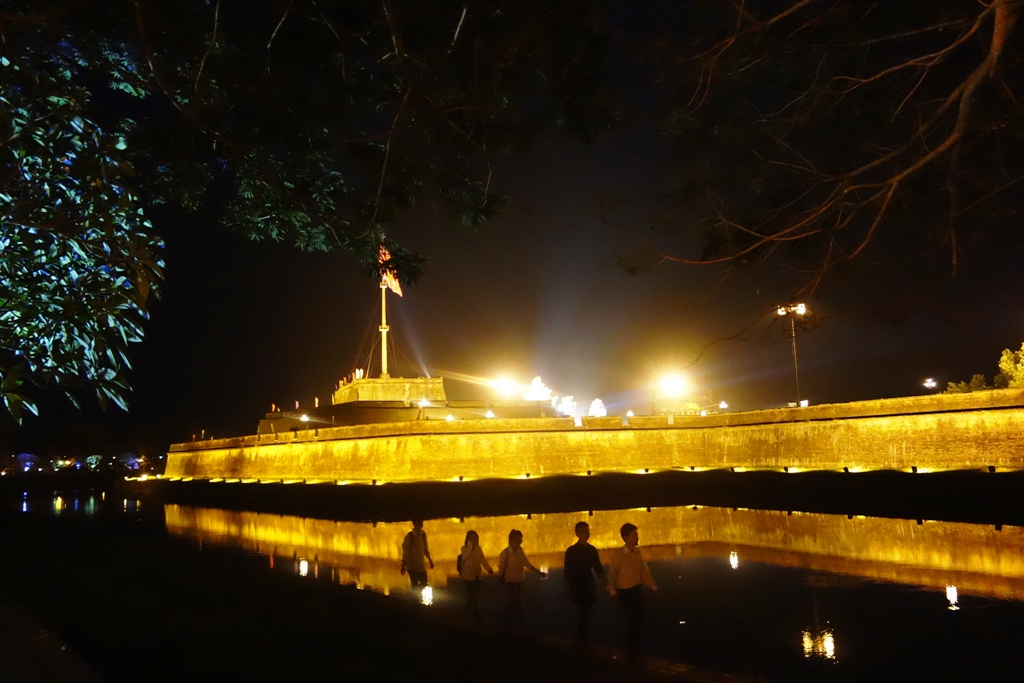 We really enjoyed the Ao Dai fashion show. The Ao Dai is a traditional Vietnamese outfit with a split skirt over pants.

We also really enjoyed how they lit the Trường Tiền bridge up with fire. They placed many buckets with a torch in each along the bridge and at night would light them. People could walk across the bridge while it was lit up. There were art displays and some photography along the bridge as well. It was quite beautiful. 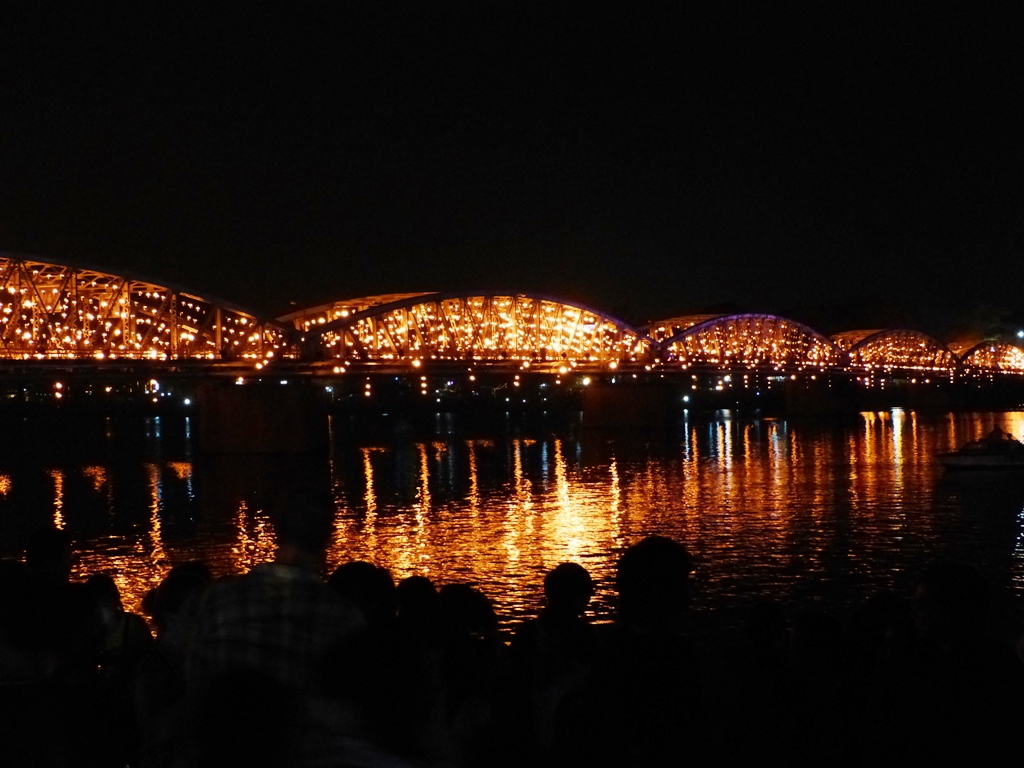 One of the main attractions to Huế is the old citadel. This is the complex where the emperor ruled from. Unfortunately this area was hit hard in the American war. The city was invaded during and held the Tet offensive. It was during this time that the majority of the damage was done to the citadel. In the beginning it was attempted to refrain from destroying the citadel, but eventually the high casualties caused the decision to bomb more aggressively. The effect of this today is that much of the citadel is an abstract idea instead of real buildings you can visit. Some of the core buildings have been going through restoration, so you can get a feel for what this citadel used to be like. Some interesting aspects of this citadel are the photographs they have from when the last emperor was around. This showed the respect and interaction of the emperor and the court and gave some insight into the time. These are placed at key areas near where the events happened or where the photo was taken so you can get a sense of the life that was there. 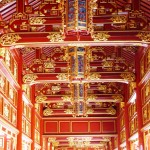 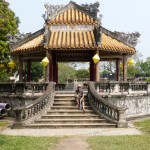 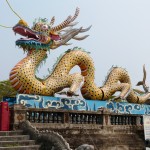 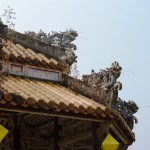 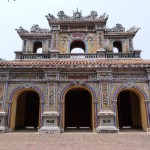 Another big attraction for the Huế area are the tombs of the Nguyễn emperors. These resting grounds were built during the lives of the emperors and used while they were alive. Most have large gardens, water features, private and public spaces, along with the eventual tomb. They were places the emperor could go to get a bit of relaxation while they were still alive. One had buildings for all his concubines and a theater created where they would put on plays for entertainment. Another had a large fishing pond, where the emperor liked to go to be by himself or treat a special dignitary. 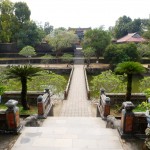 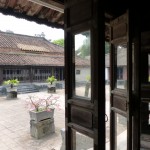 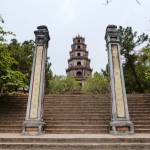 During these visits we learned something interesting about Vietnamese tastes. Many people find goatees very appealing. During our walks through the city and around the tombs I was approached so people could get pictures with me and my goatee. At first we were confused. One group of men, 30 to 40 in age, came up to us and were very gregarious about the goatee. One man even played with it, making motions like he was eating it. 8| That was a big shock. A very very shy woman of 18 or so followed us through a tomb until her friend finally pushed her towards us so she could have her picture taken with the goatee. We asked at the hotel and we were told ‘of course, to us it’s very attractive. It’s very beautiful. Most Vietnamese men couldn’t grow a beard like this and for the ones who could it would take many years. It’s something they would want to have’. I’ve never had my goatee called beautiful before.