An area of Vietnam we didn’t want to miss was the Hạ Long Bay area. Many people told us we needed to see this area before we started the trip, and our research confirmed the decision. Hạ Long Bay is in the Gulf of Tonkin and consists of over 1500 square kilometers made up of a couple thousand islets. These islets are mostly limestone karst formations that have evolved over the last few million years. The tropical wet environment has slowly eroded the stone where the water flowed, carving out the islets along with cave and cavern formations along the way.

The descending dragon bay. This is the meaning of Hạ Long Bay. If you want to believe Wikipedia, it was given this name by a French newspaper in the 1890s based from an account of a sailor who came through the bay. The name has stuck pretty well and from talking to people living there now, they seem to like the name. It’s a quite romantic name that is very fitting for the beauty you can find here. Sailing through the waters it’s easy to see how the name was derived.

We came to this area though Cát Bà Island instead of coming in through the city of
Hạ Long or Hai Phong. We chose this path because Hạ Long Bay is so popular that there are many many visitors, and the corresponding reputable and less than reputable service providers. Most are pre-booked tours coming from Hanoi and cycled through one of these ports. Quality isn’t a concept that has caught on through these ventures quite yet. The churn of people, boats, touts and trash that flow through the main ports helped us decide to go about this visit from a different angle.

Cát Bà island is a destination in itself, outside of any bay touring you might want to do. Most of the island is a nature preserve set aside for the golden headed langur, a very endangered primate that is only found around there. There are also a number of hikes you can do on the island and a couple beaches you can visit. Cát Bà town is a small port town, that used to be mostly fishermen getting supplies which has evolved into a tourist town with rows of hotels, restaurants and a few floating discos. Getting to Cát Bà town is difficult since it’s out on an island. A 4 hour bus ride from Hanoi, swapping buses outside Hai Phong. Transferring to a ferry for a half hour cruise. You finish with another hour on a bus through the island jungle before reaching the town. While it does take a bit of time to get there, it’s mostly a beautiful trip.

From Cát Bà we took an overnight cruise out into the Lan Ha and Hạ Long bays. We
used a company called Cat Ba Ventures to do our tour. We selected them based off of Lonely Planet’s recommendation. I can’t quite say that I’d recommend them to someone else because they did change our agreed upon plans last minute because it worked out better for them, regardless of how it worked for us. They also shifted us between boats which made for a bit of confusion and brought about wariness since the second boat wasn’t as secure as the first. It’s best to say that they were not as bad as we understood the other places to be, but they aren’t clear or straight with their customers as westerners are used to having.

To look at the positive side of the cruise and what was delivered by Cat Ba Ventures, we were on a boat with only 5 customers. The other three on the boat with us were fun and interesting. We enjoyed spending a couple days with them and getting to explore this beautiful area together. We sailed on a boat that had the look of an older junk that was run by a couple who worked the boat and took care of us. Our guide, Phuc, a former English teacher in a Vietnamese school, was a great guide, knowledgeable about the area, the local people and ready to engage in conversation, especially when a little rice whiskey is involved. 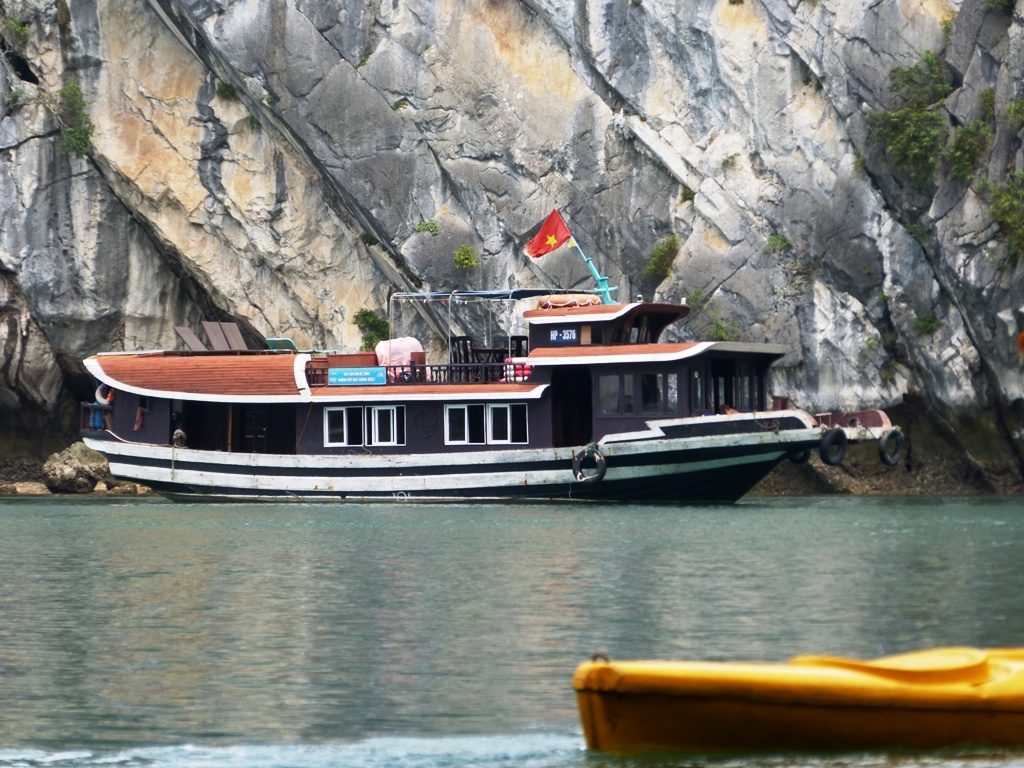 I struggle to write this post because I don’t want to gush again like we did for the Doubtful Sound, but… this place is beautiful. We headed north from Cát Bà town, through Lan Ha bay and towards Hang Trai island in between Lan Ha and Hạ Long. On our tour we saw gorgeous spires and wide open spans. We also curved through and around a number of karst formations. 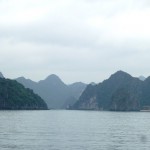 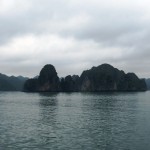 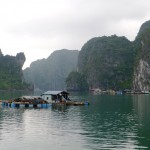 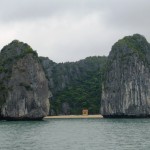 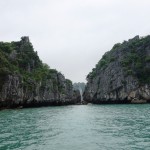 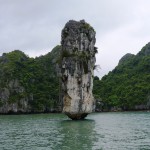 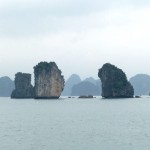 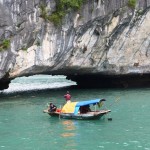 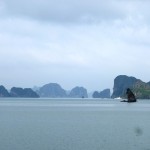 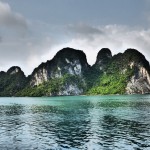 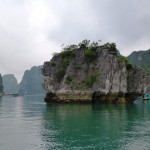 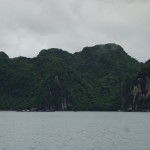 Halfway through the day we did a bit of kayaking in a little bay in a larger karst formation. This mini bay had a number of caves and inlets easy to paddle around. One cave went through, enveloping us in total darkness as we passed between the narrow stone walls and into what seemed like the heart of the islet. This opened up to a pool about a half kilometer in diameter and a few meters deep. Paddling though this landscape gave us a feeling of isolation and enabled us a rare solitude in which we could enjoy the scenery. 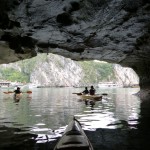 Kayaking in the Dark cave in Lan Ha Bay 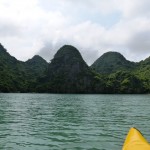 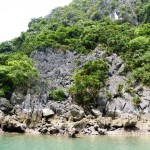 We’ve also visited a cave on foot and then walked at the top of the rocks from where we could see a beautiful lake lake (not really a lake as the tide can be observed here as well, but it looks pretty much cut from the rest of the ocean). Unfortunately both names escape us now. 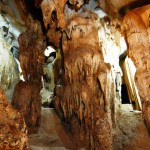 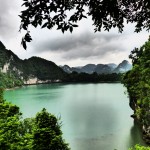 That night we moored in a cluster islets on the north east side of Cát Bà Island and watched as clouds moved in and the sun went away. Lan Ha near dusk is a magical place. Silhouettes of the islands stand out against the waning daylight. Water calms from ebbing tides to almost a mirror pool. Lights spring up along the shoreline as the fishermen come out to search for squid. We enjoyed a very tasty and plentiful meal while we soaked up the scenery. Later that night it started to rain. It was a pleasant, evocative rain. The mirrored water would ripple as drops would start to come. From inside we could watch the weather evolve and the lull of the rain eased us into a deep sleep that night. 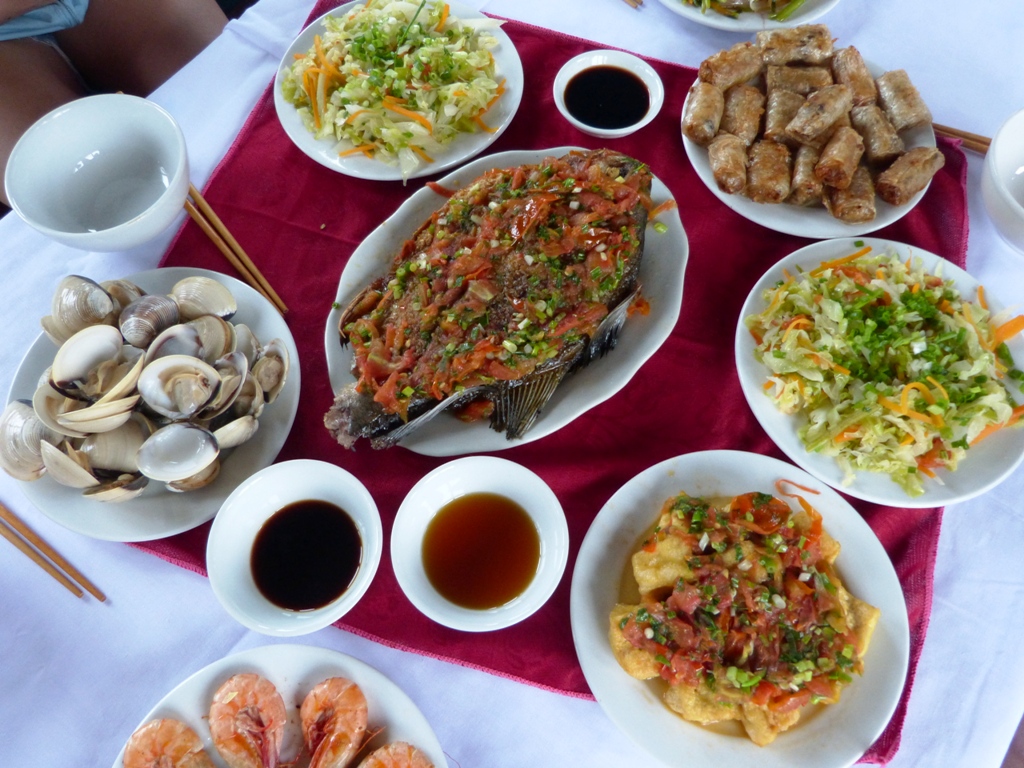 Tasty food in the bay

The rain continued the next day. We moved to a different boat and went out to spend the day swimming and doing some more kayaking. The rain didn’t allow us to do much of either though. It picked up about half way through the day, so we took an early lunch in hopes to let it pass. It was very interesting to watch the rain from the water though. Sheets of water would come in stages alternating between hiding islands and revealing others. Gray mists would enshroud an island while another was Doppler with bright rays of sunshine piercing through the changing cloud cover. We were sad that we couldn’t kayak more, but this show made up for some of our disappointment. It also gave us the opportunity to teach the other guys Seven, a very entertaining card game. It was a success! 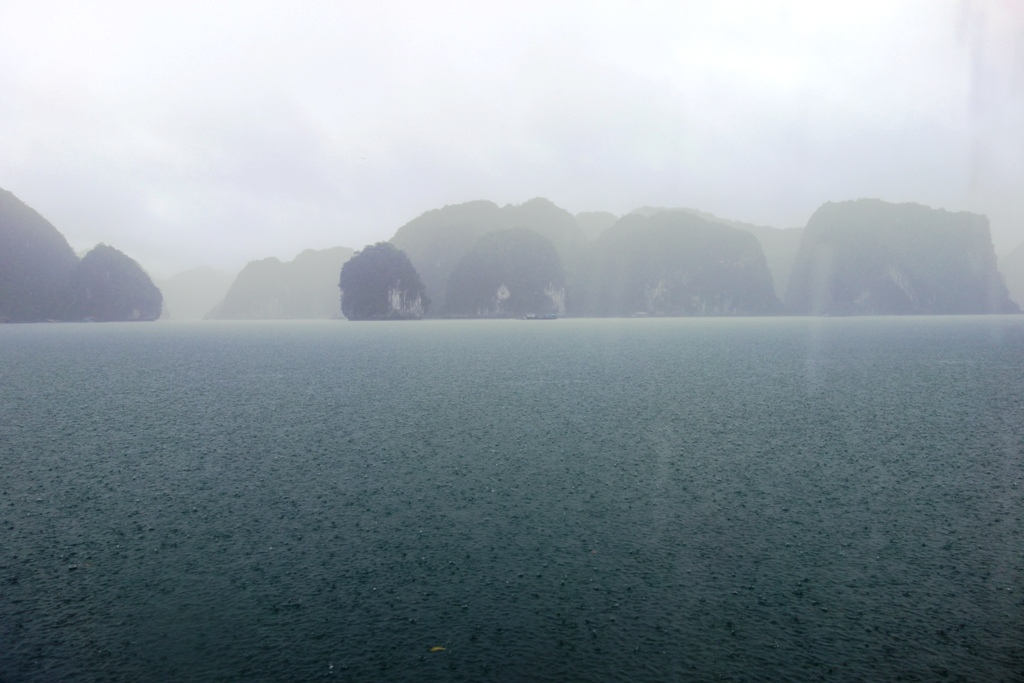 Throughout our sailing tour, we passed through a couple fishing villages. These villages are made up of a number of floating platforms that contain a small house, a number of net pens suspended into the water and held in relative space with tethers to the nearby stone walls. Families live on these floating farms and position themselves relatively close to other families making small towns. It’s a unique way of life that is quickly changing. 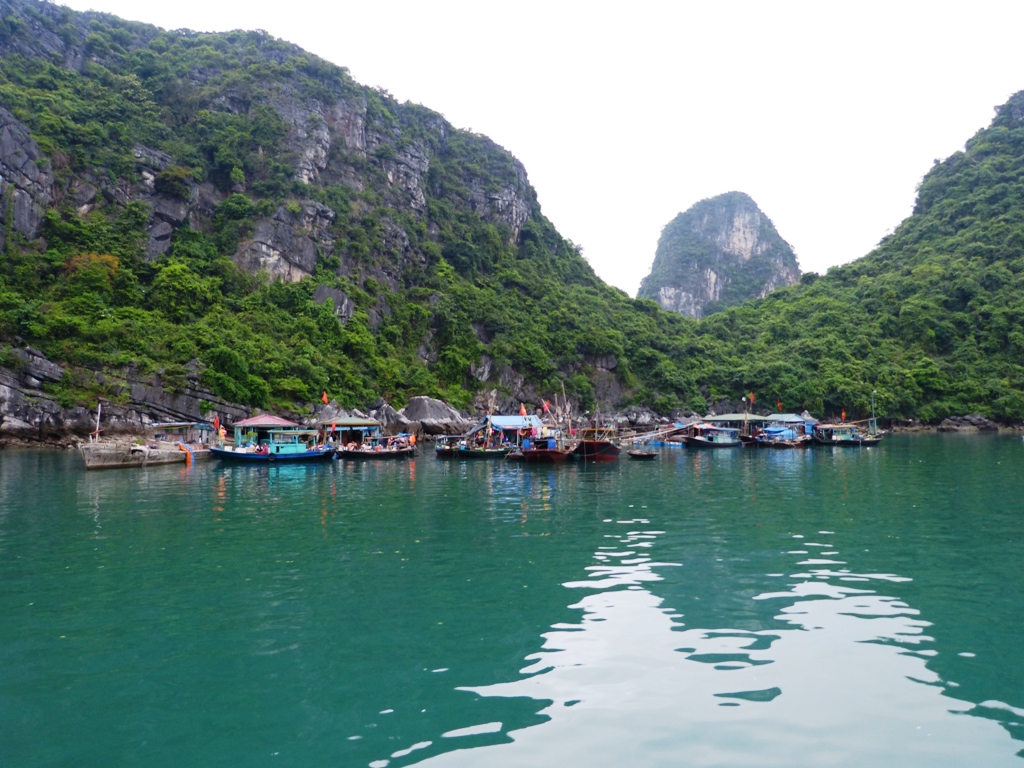 The government is moving all the remote fishing families into a few larger floating towns near the established land towns. The reason for this change is two fold. First, education isn’t available to the children who live in these remote villages because it’s too costly to take a child into town each day and many of the families are just subsistence living off the fish they catch. The second reason is that there isn’t any waste management out here. Trash is a huge problem in the bay. Before tourism hit, the locals tossed their trash in the bay and relied on the tides to take the trash away. The population was low enough that most of the trash was evacuated and there wasn’t any accumulation in the bay. Now, the population has radically changed due to the tourist trade. The practices for handling trash haven’t though. Also, habits changed and plastics have seriously complicated the situation. Now, because of the volume of the trash and the new materials in the trash, the tide doesn’t remove it all. You see floating debris throughout the whole bay area. Plastic bottles are apparent everywhere along with a number of floating plastic grocery bags. But it’s not just tourist trash. Boots float by. Yellow and orange rubber gloves used by every fisherman in the area are easy to spot. Plastic wrappers. My favorite spot was a couple chairs, one broken, one intact, floating by. In between some of the larger karst formations are areas with little or no flow where floating trash islands have accumulated. The feeling is that the government can control the tourist trade to better manage their waste, but controlling the fishing villages while they are remote is almost impossible. Moving everyone together can help both education and reducing the floating trash in the bay improving the people and their heritage area.