Part of our time in South Africa was spent doing a driving safari in Kruger National Park. Kruger is the largest national park in Africa and one of the most visited. It is about  2 million hectares and is an open roaming ground for the animals. The park ranger presence is strong throughout the park because poaching is an ever present issue. 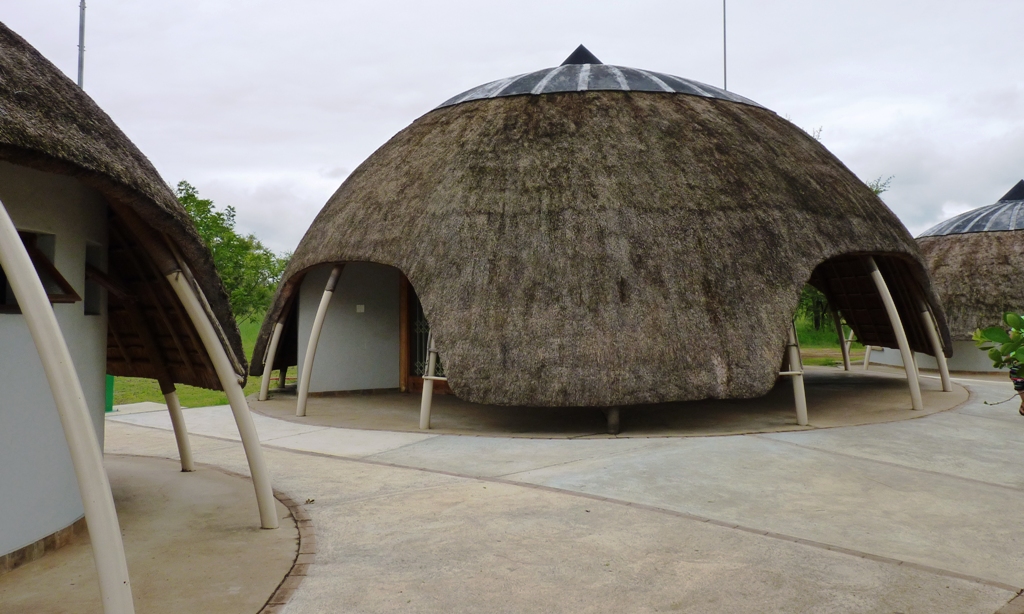 Our route through Kruger was from south to north because we were going to Mapungubwe National Park afterwards. The way the park works is that they provide lodges throughout the park for you stay at if you want to sleep in the park. You can bring a campervan or a tent if you have one, or rent a lodge with a kitchen to stay in. All have BBQ pits so you can grill if you wish and most camps have some type of restaurant with limited selections and stores you can buy supplies at. We planned a couple nights in Oliphants and Shingwedzi Rest Camps for our stay.

The park has designated roads you are allowed to drive on, main roads are tarmac and secondary roads are gravel. All roads have slow speed limits on them, 30 to 50 km/h, as the point is to look out and search for animals. As you drive, you are instructed to stay in your vehicle. Getting out to say, change a flat tire, opens you up to becoming part of the food chain, so they advise you to just drive on the flat until you get to the next camp. 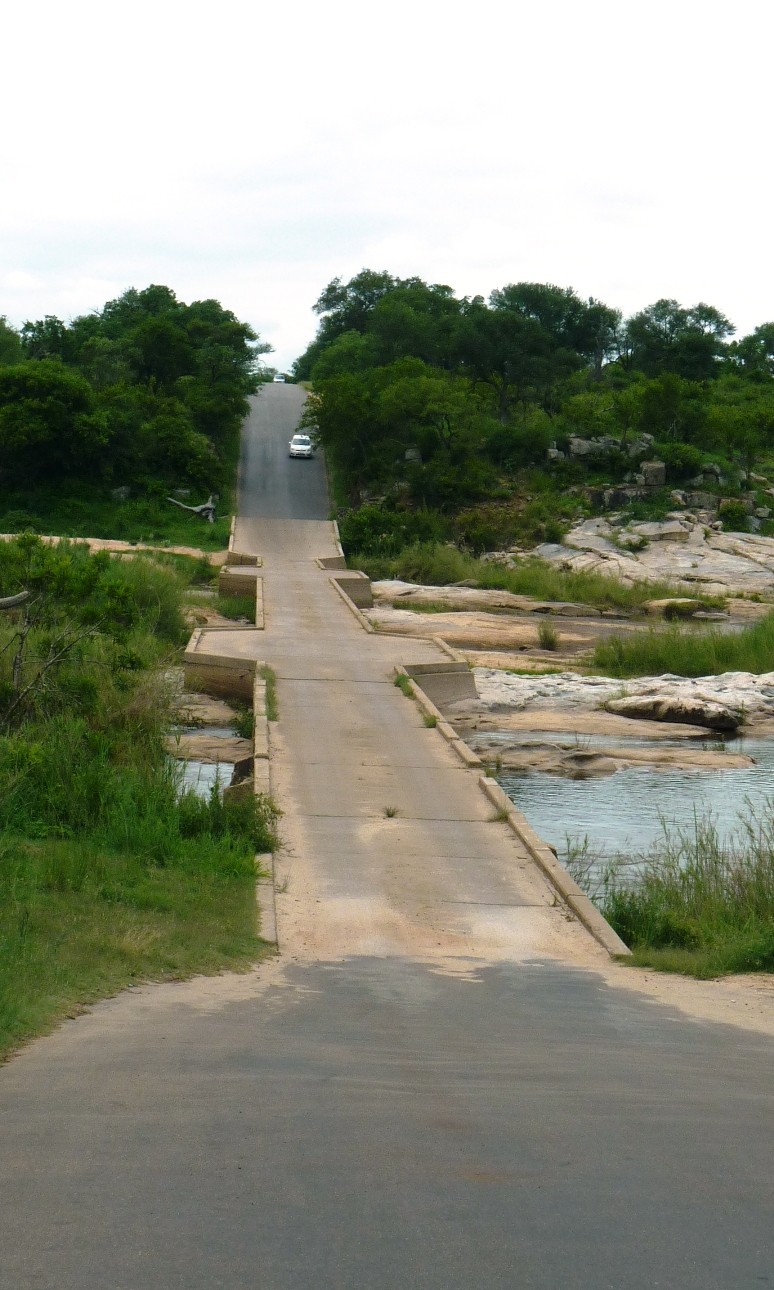 Bridge with ‘at your own risk’ pause points

Driving like this was more intimate than the structured safari we had done in Tanzania. The fact we were in a car handled by us and the animals were just right there on the other side gave a completely different feeling. This was also different than the Serengeti because the land was not as flat and the vegetation was more dense. This made finding animals more challenging than before, but also enabled a few close inspections as the density sometimes worked in our favor. 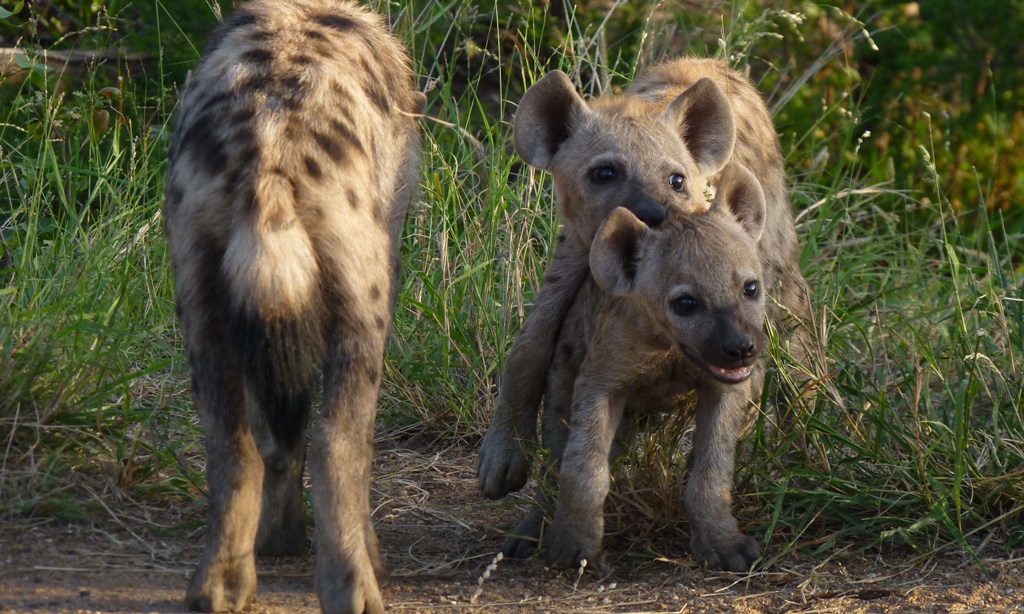 In our Tanzania safari, we went on and on about lions, mostly because they are just so magnificent. This safari drive afforded us to see a few lions, but they were markedly fewer and less accessible. In Kruger the elephant seems to be the one to rant about. We saw many families of elephants across all of the park. We took a walking tour from Shingwedzi, going with two rangers in the early morning before light, and walking through the bush. 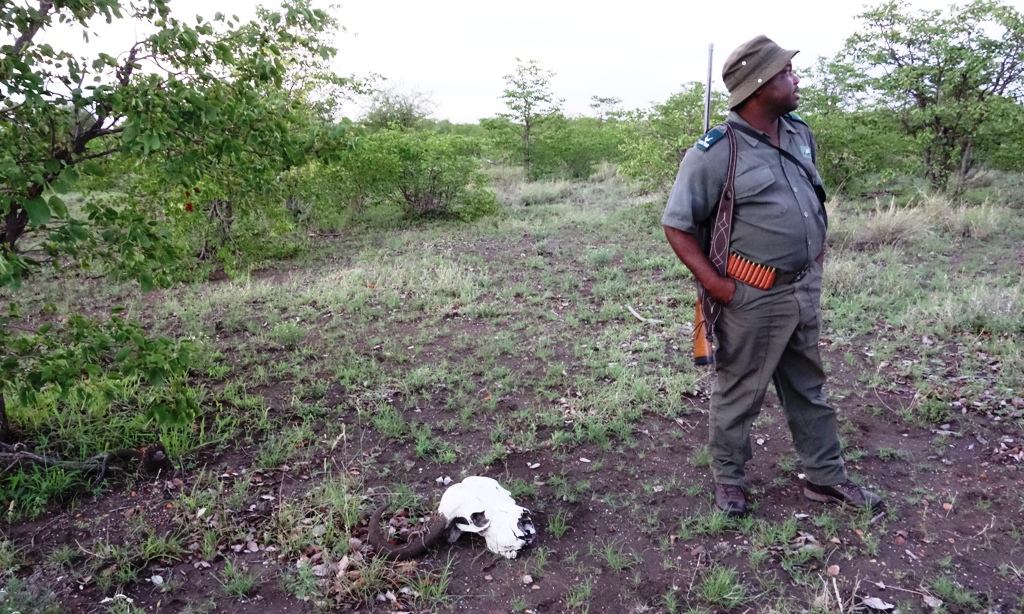 Bushwalk with the rangers

On this walk we learned that the population of elephants in Kruger park is greater than what the land is estimated to be able to handle. The rangers have opened up the park boarder between South Africa and Mozambique so the elephants can leave if they want and then tagged dominant matriarchs to watch their travel patters. As the rangers have watched the patterns of families they have tagged they saw that the elephants do leave and go to Mozambique. Unfortunately, they go as a one time holiday and then come back to South Africa side. 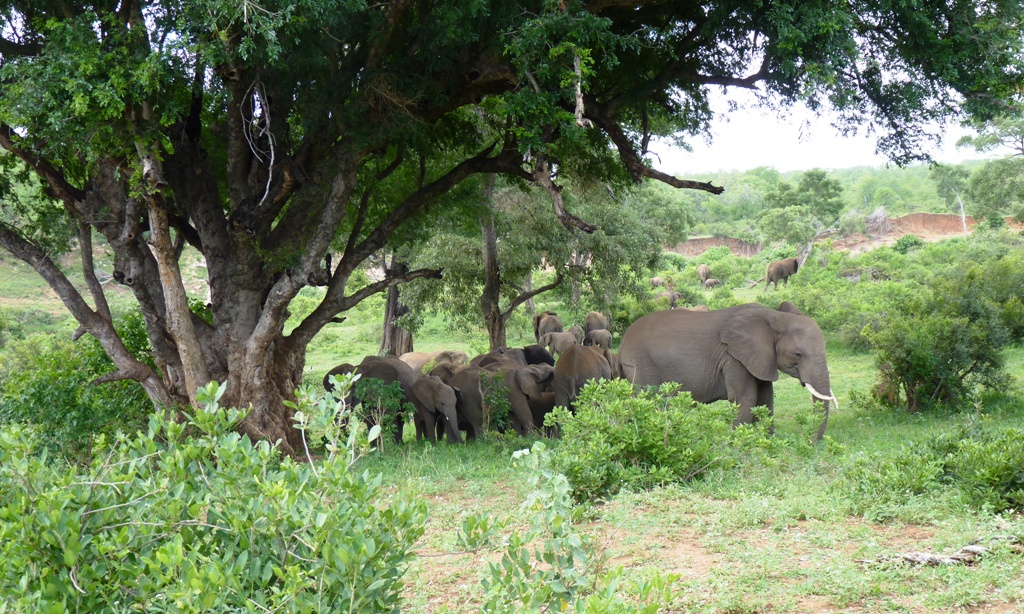 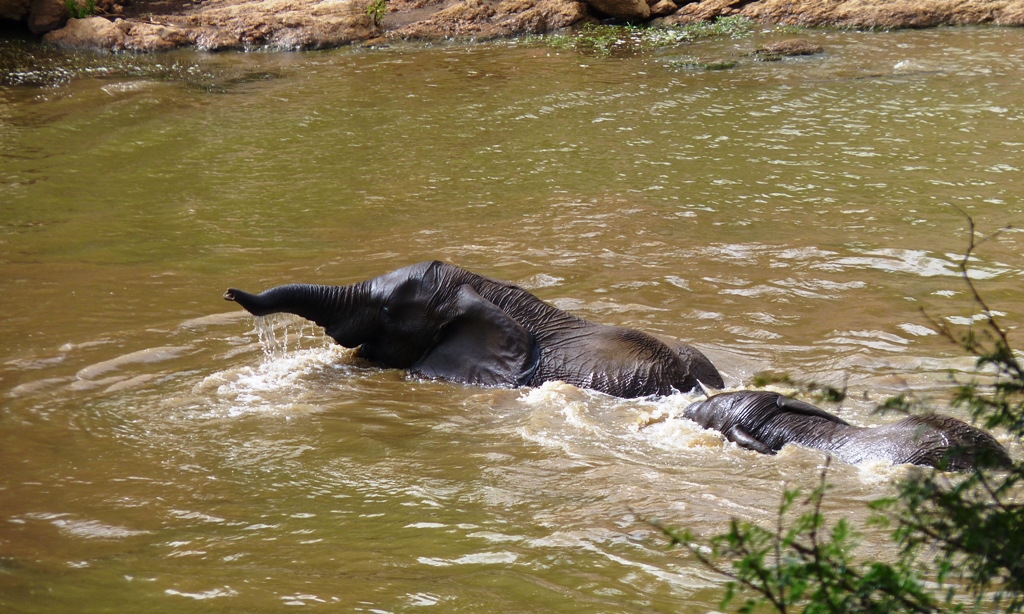 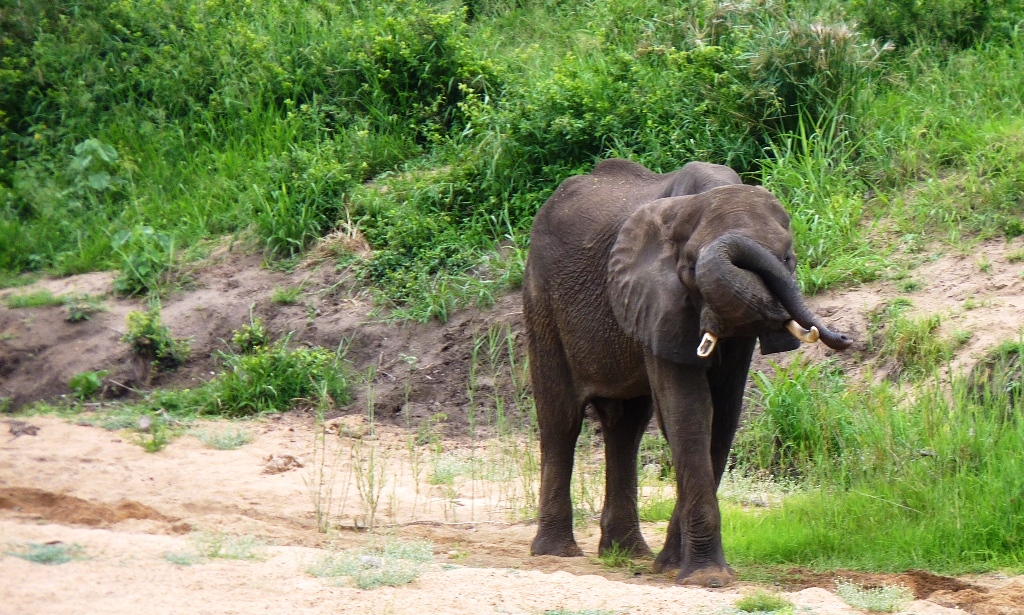 Elephant telling us to bug off

One opportunity we got to see that was truly unexpected was a group of feeding crocodiles. It was a situation where an elephant had died near the river. Elephants normally die from old age. Their teeth give out and they’re not able to take in as many calories as they need to. Anytime an elephant dies, it becomes a feast for the animals of opportunity, vultures, hyenas, jackals and in this case crocodiles. When we first sighted the area, we couldn’t tell what we were looking at. It looked like a couple of large boulders and a lot of logs on the riverside. Then the boulders kind of moved in a way that didn’t make sense. As we watched the reality of the situation  became apparent when a crocodile crawled out. The boulders were really the hide of the elephant draped over its skeleton. The movement was one croc inside turning after eating to leave. The logs on the side of the river were about 35 crocodiles laying in the sun with full bellies. 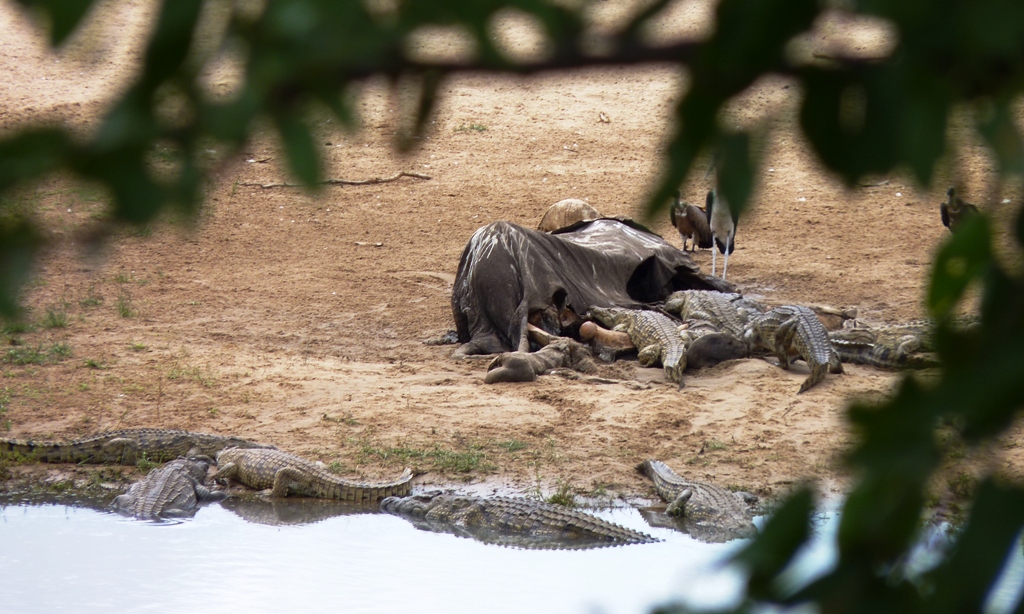 We learned that the zebras and giraffes are different breeds in South Africa from the ones in Tanzania. The zebras seemed stockier, with a stiffer mane, with a bit more of an attitude when you meet them on the road. They are still wonderful to watch of course. The giraffes, too, seem a bit stockier, not quite as tall and lanky as their cousins in Tanzania. One more thing that really struck us was the difference and number of birds we found in Kruger Park. Ornithology hasn’t been a pastime of ours in the past, but we have enjoyed bird spotting now and then. In Kruger we couldn’t help but admire the variety and beauty of the birds we saw. We spotted dozens of different types of birds.

Before I forget, I must talk about the biltong, or South African dried meat. It’s similar to American jerky, but the process is different and fiercely defended as ‘not jerky’. In the little stores in the camps they sell a wide variety of biltong. Much is made from beef, but they also have an extensive collection of meat from many of the animals in the park. Anyone who knows us, knows that we are adventurous eaters. An opportunity like this isn’t something we could pass up, so we picked up some impala, kudu, wildebeest and steenbok meat sticks to enjoy on our tour. I have to say they were tasty!

Interesting side note: we happened to cross the Tropic of Capricorn at noon of December 21st, the southern solstice, the day when the sun is the longest in the sky for the southern hemisphere. Afterwards the daylight starts decreasing. Well for you guys in the Northern hemisphere that would have been the winter solstice and everything would be reversed :)) 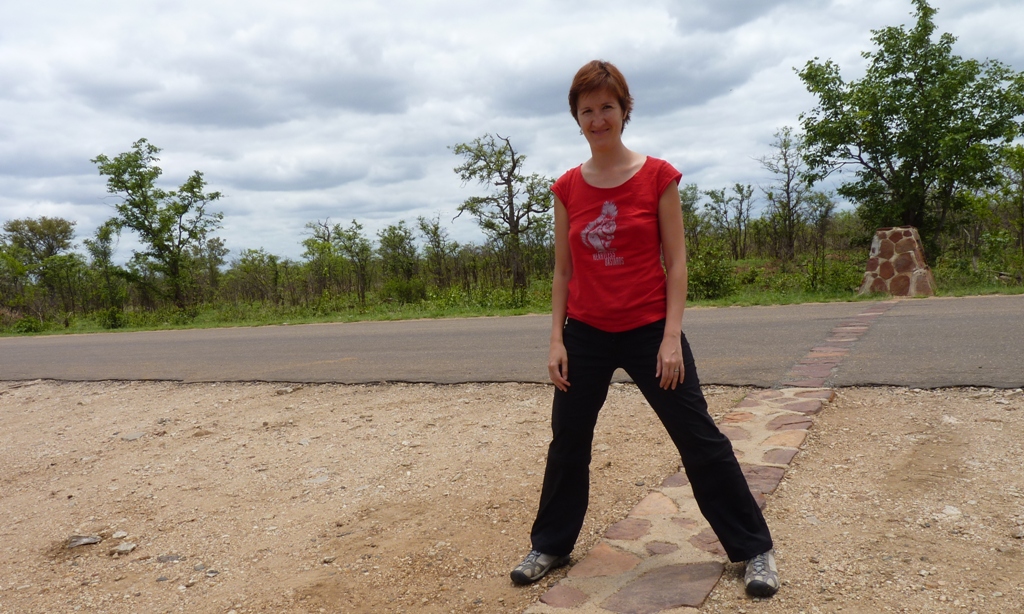 Crossing the Tropic of Capricorn