Ok, this might be a silly entry, but I think a tribute is worth it. A tribute to pie. This isn’t about the sweet pies I have known since my childhood, but about the savory pies that were the rare treats of my youth. Here it seems these are not treats, but staples. At least I’m deducing this from the sheer of pie shops that are around.

We first noticed them in South Africa, but they were on the periphery of our awareness. A couple pies in a café display window or a sign with a faded crusty goodie on it. Australia though made it clear. Bakeries along the lines of donut shops were visible in many places, looking the same level of ‘not as healthy as you should be eating’. Fresh baked goods have their draw, so we had to check one out. Walking inside, I was expecting what I’m used to, row after row of deep fried donut goodness, crème filled, jelly filled, long johns, bear claws and donut holes. There were donuts, about 10 of them, looking somewhat recognizable as a donut but presented differently. 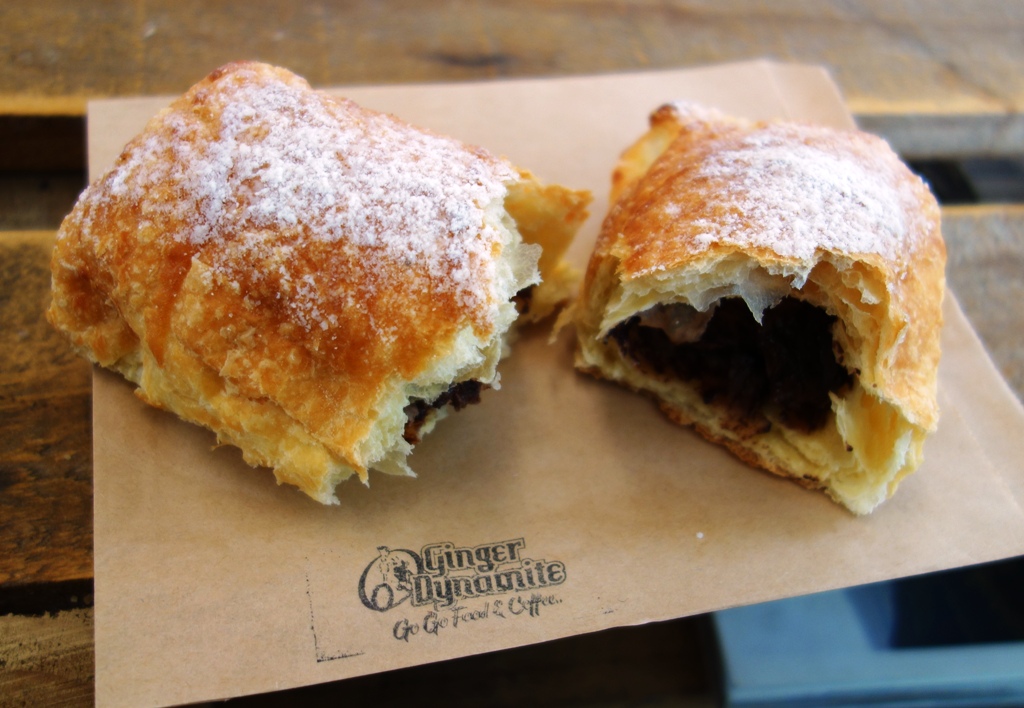 I was lost after looking at these samples because the rest of the case was filled, but not with what my mind was expecting to be there. Instead of the variety of donut, the shelves were overflowing with many different types and styles of savory pie. 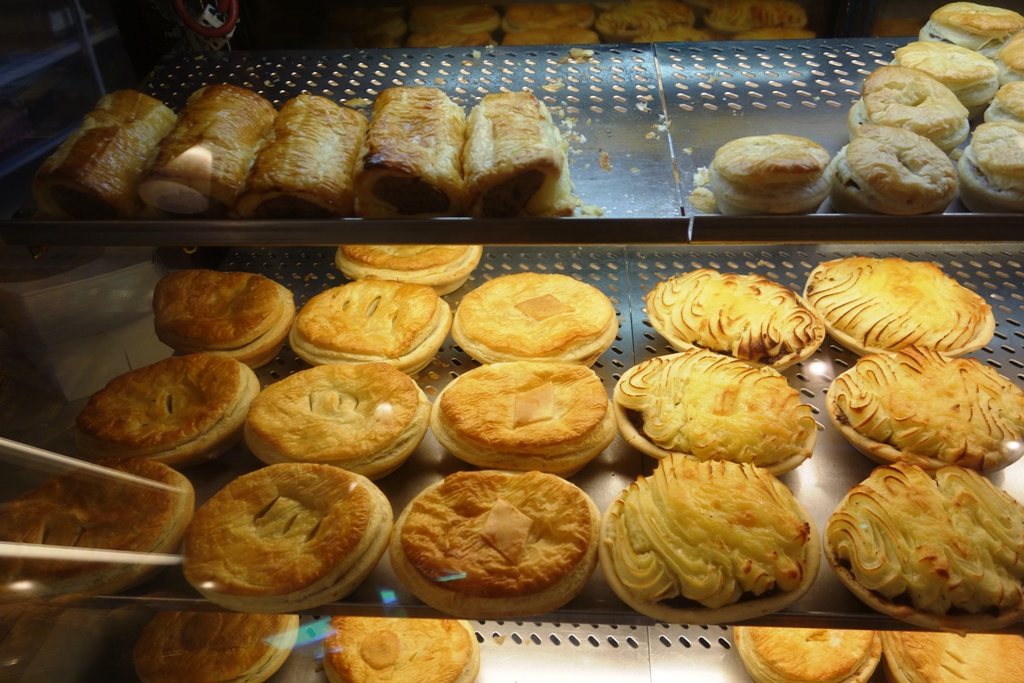 Pie display at one of the many bakeries around 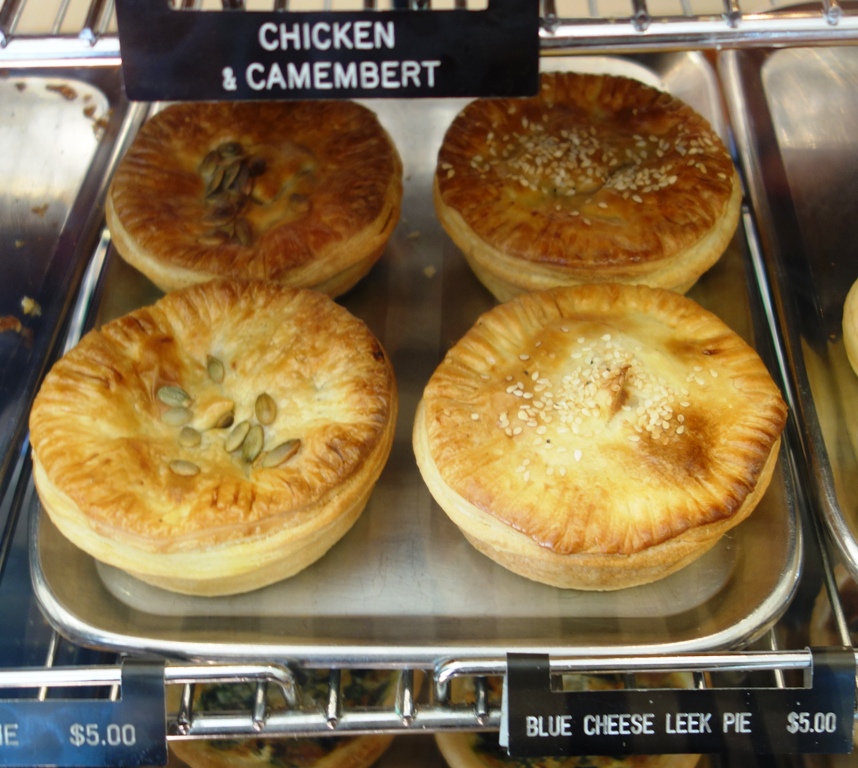 The land of pie

‘Pot pie’ was what my mind finally came up with after seeing so many options. These are pieces of art though, so pot pie doesn’t really carry the weight it should. These have very flaky crusts, but are sturdy enough to be picked up in the hand and bitten into without imploding on themselves. The filling is thick and the main ingredients are chunky, both facilitating the mobile consumption practices that these pies are made for. 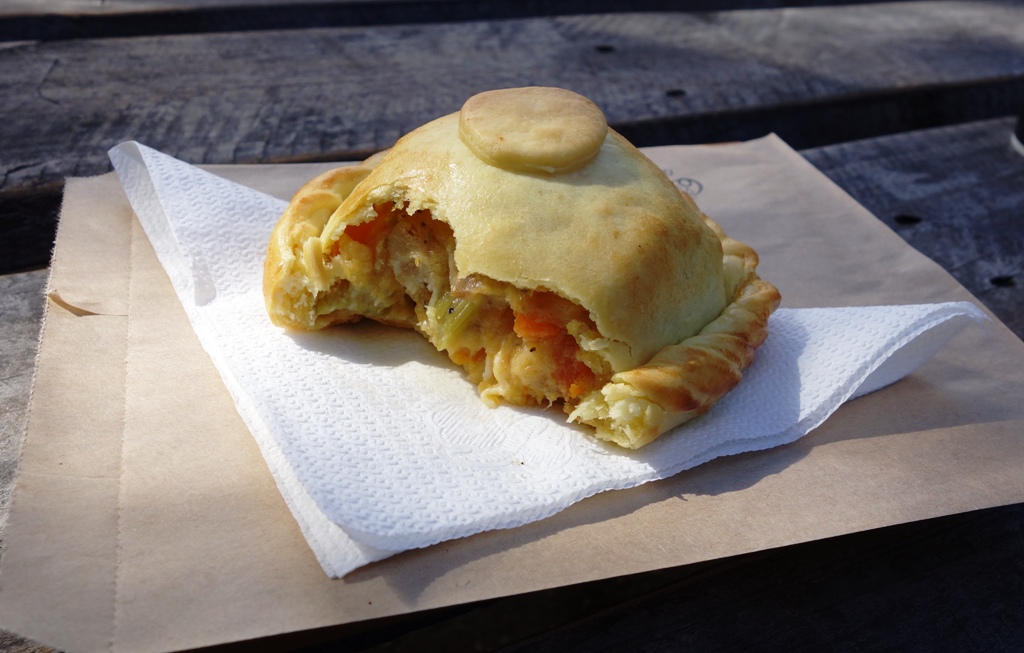 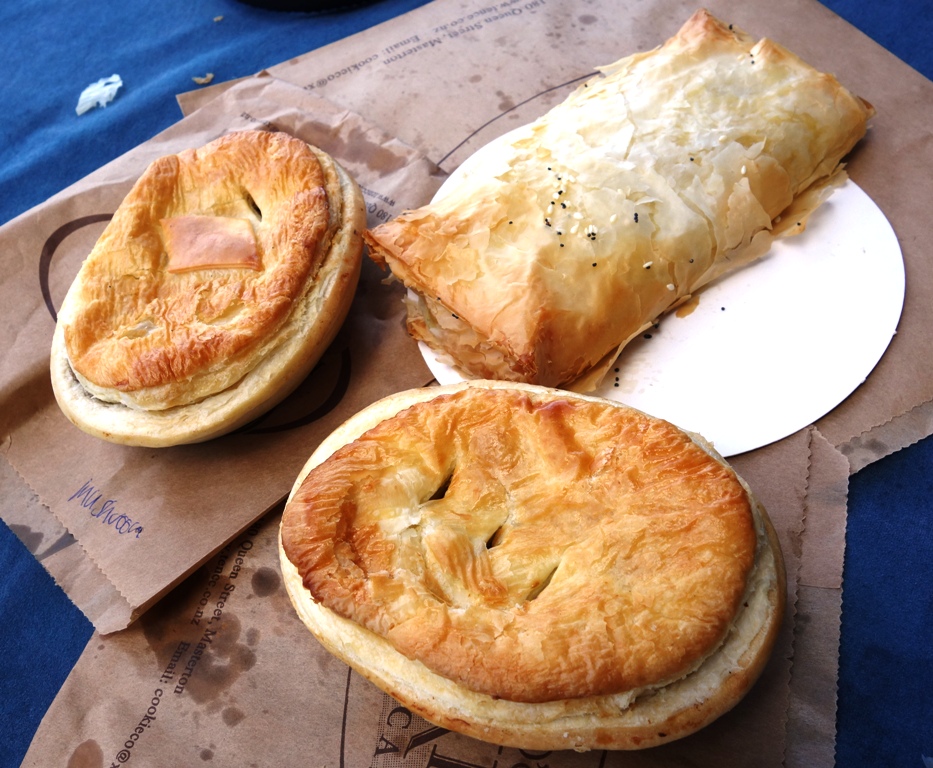 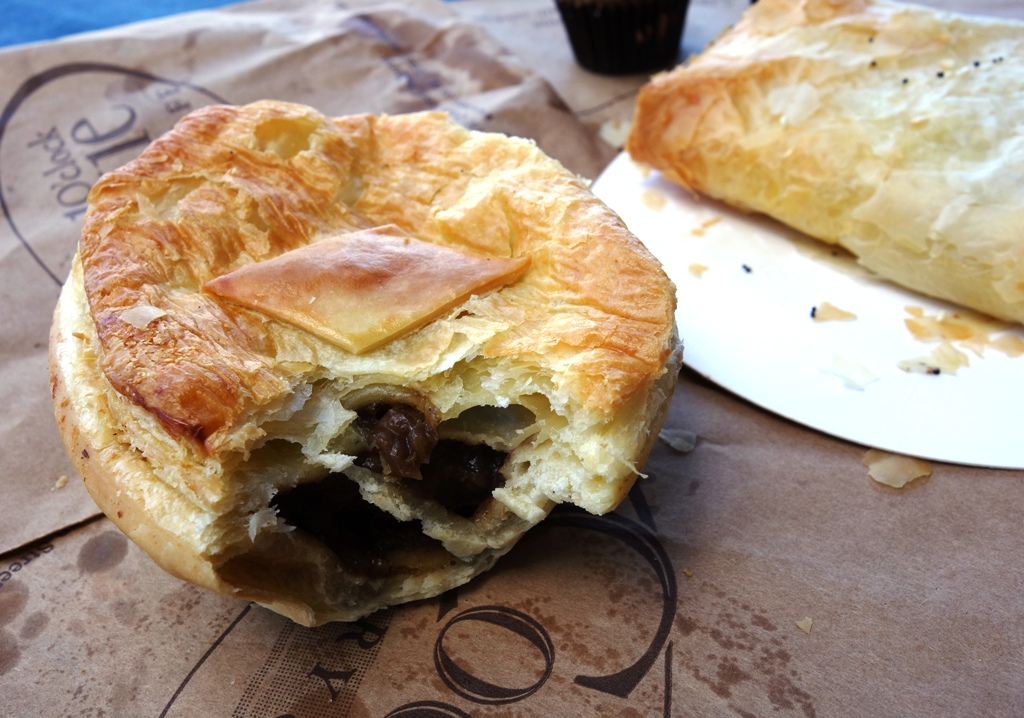 The flavors are as varied as the chef’s imagination, but there are some staples that are found in most places such as beef and mushroom, chicken and bacon pie, sausage rolls and the ubiquitous steak and kidney pie. Mihaela thought the steak and kidney were very tasty, but they weren’t my favorite. 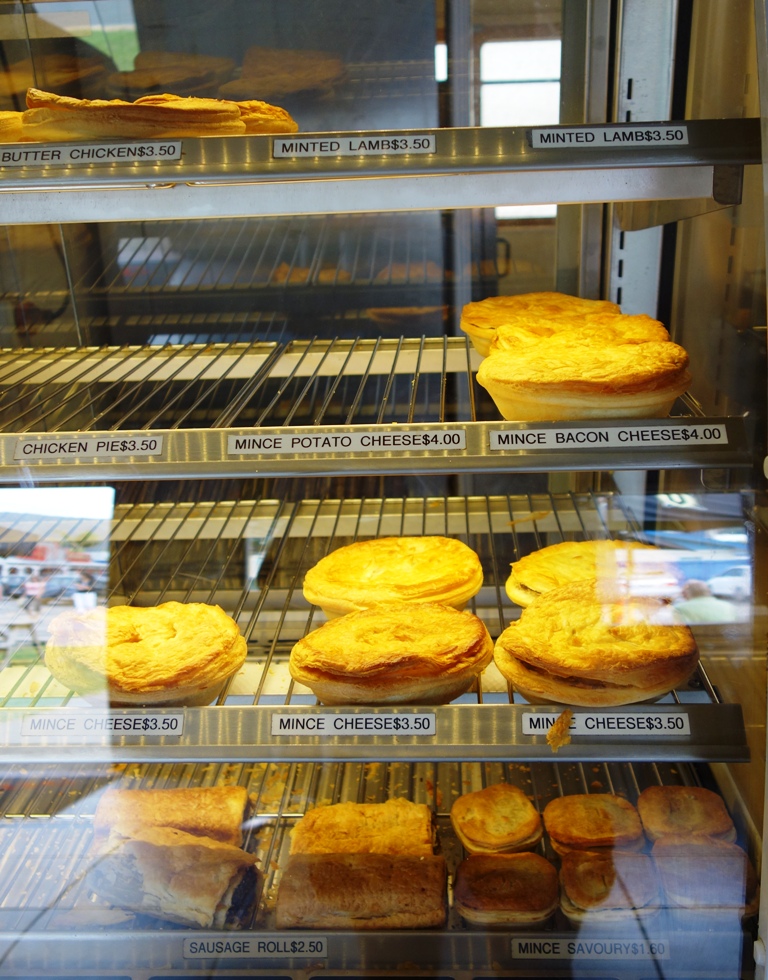 Mid day half empty display – good to illustrate the offerings

In addition to the pot pie shape and make up I’m familiar with there were also all sorts of rolls and pasties to compliment the offerings.There are also sweet pastries like cherry danishes and chocolate croissants. But they have their own corner at the farthest end of the displays. 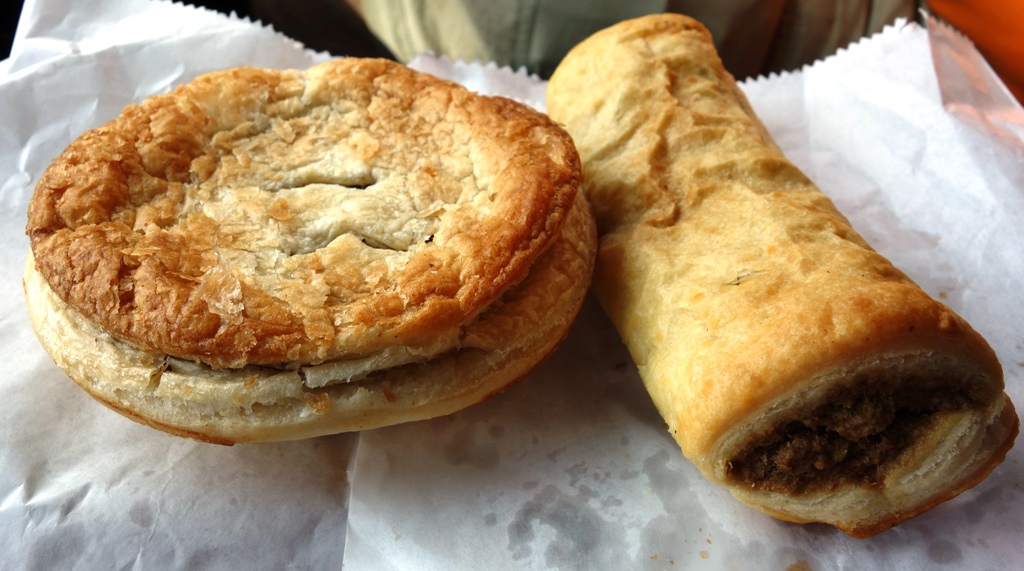 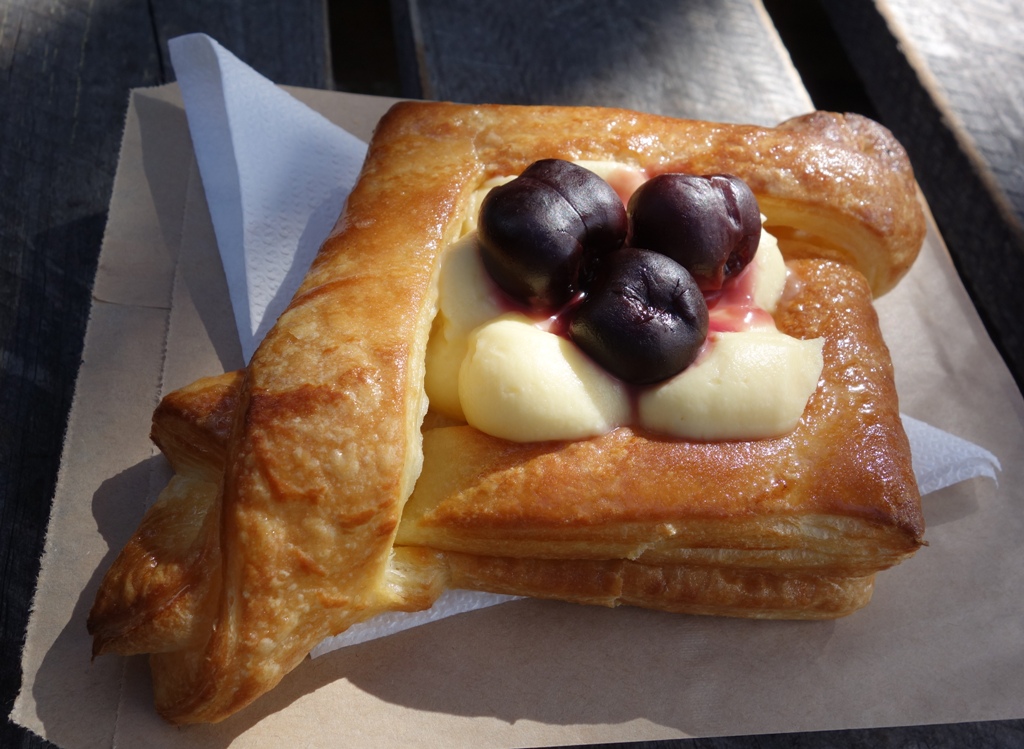 New Zealand carries on the pie tradition as well. Now that we knew what we were looking for, we were able to identify the better made pies out there. Here we found more craft into many of the pies and pasties.

Now I realize that this pie proliferation is part of the English influence on these areas. I find it interesting that these pies aren’t as popular in the US and that I’ve not seen them much in my travel to Canada. What happened with these former colonies that didn’t keep the savory pie so much?

It brings to mind another difference that probably came with the English colonies, the variations of bacon; streaky bacon that is everywhere in the US, bacon in Canada that is mostly just the pork loin with the fat trimmed, rashers in the UK with the loin and some fat still attached but the streaky as a separate piece, and then middle bacon that is all the streaky and the loin together that is found in Australia and New Zealand. Mmm, bacon…