Day 3 was the beginning of the Serengeti game drive for us. It takes about a half day to drive there from Lake Manyara. You pass through Ngorongoro Conservation Area on the way to get there, so you get to peek at the beauty you will see on the way back. At this point is where David tells us that the road starts to become a safari road. What he means by this is that the Tarmac has stopped and much of the road is dirt and sometimes gravel. Sometimes there are rocks the size of medium watermelons mixed in for variety. David tells us that the massage is included in the safari.

As you drive across the rim of Ngorongoro and down towards the Serengeti Plain you are treated great vistas and able to see how the land changes from lush mountainside to more dry grasslands and eventually into what are alkaline flats that were barren at the time we went. The Maasai can live in Ngorongoro Conservation Area because their livestock and living practices are symbiotic with the herds of zebra, wildebeest and other animals that come through this area. Because of this, up to the boarder between the Ngorongoro Conservation Area and the Serengeti National Park it looks like nothing lives at this time. The herds of cattle have eaten most of the dry grass and no rain has come yet.

The rains are late this year. Instead of the beginning of new growth on the Serengeti Plain, it’s still dry and seemingly lifeless. Across the boarder into the Serengeti National Park life is more evident. While it’s still dry, zebra, Thompson Gazelle, Grant Gazelle and Heartbeast start appearing. We learned that these animals can be here now because they, like cattle, have the ability to eat dry and fresh grass. This become important when you look at the wildebeest which can only eat the fresh grass and then must migrate with the seasons following the water. The rains are late this year. The wildebeests aren’t around. We learn that they started to come south, but smelled the lack of rain and turned back around to wait it out. The secretary birds are very beautiful despite the lack of rain. 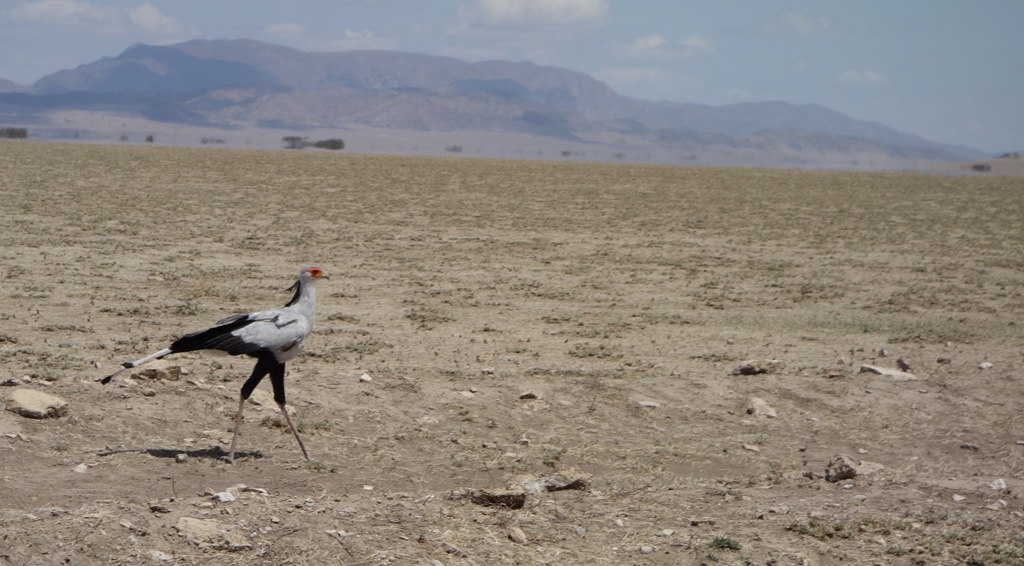 We get into Serengeti NP proper after 13:00 and take a side route towards the heart of the park where there is a constant flow of water. This side road is mostly dirt, the red earth that is everywhere. We are lucky with a couple of things at this point. First some rain starts which is great news for the area. It’s not a heavy rain, just enough to moisten the ground a bit. This turns the dirt road into a mud slick and David gets to practice his driving skills a bit. He does a great job and amazes us both with his ability to navigate difficult tracks and still sight game. As he’s straddling three deep ruts and we drive/slide at an angle down the road, he looks out and points out animals he sees around. This is our second piece of luck. On the first day into the Serengeti, we see a pride of lions who had just taken a zebra down. We weren’t there for the kill, but we are able to see the two females dragging the carcass back to the male about 30 meters in the distance. When we get close they all go to ground to minimize their being seen and wait for us to move along before they continue dragging the food along. 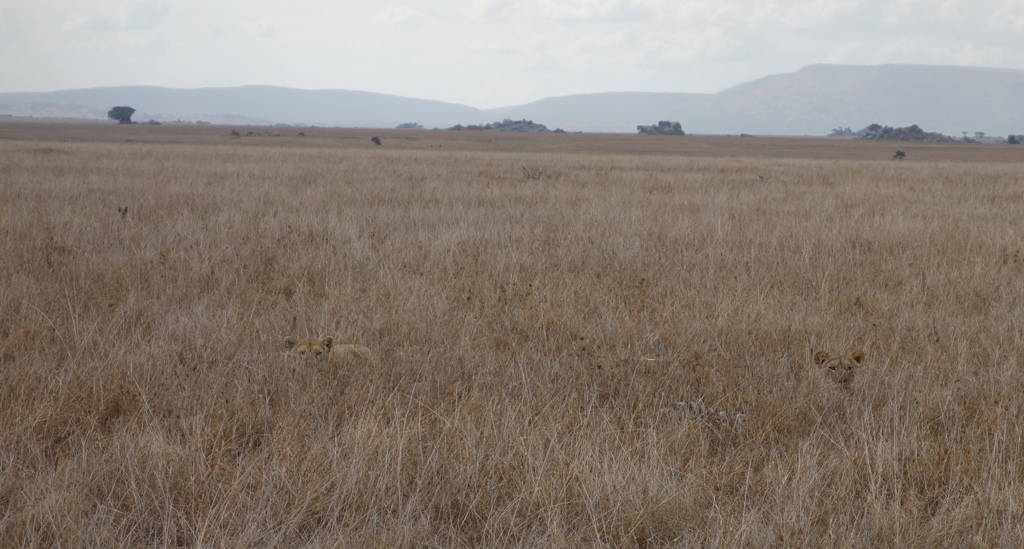 They are very interested in what we’re doing, ignoring the Jackal

Luck number three really did show David’s skills. It’s raining, the truck is sliding, then fish tailing, then sliding again. David looks into the distance and says ‘there’s a cheetah’. Dumbfounded we both look and have trouble differentiating the cat from the plains grasses until we get much closer. We were able to drive within 8 meters of the cat because she was on a kill as well, enjoying her meal of Thompson Gazelle, their favorite food. As we watched. Noticed she wasn’t alone. About 5 meters away a young cheetah was watching its mother and waiting for its turn to feed.

Two cats feeding and it was barely two hours on the Serengeti. Our luck maintained throughout the day and we were able to see more animals and great scenery. Our final spot of the day was a sleeping Leopard that you saw in the post image. We finally turned to head to camp as the sun was going down, hastening us down slick roads so we could get to our safari camp before we couldn’t see the roads anymore. 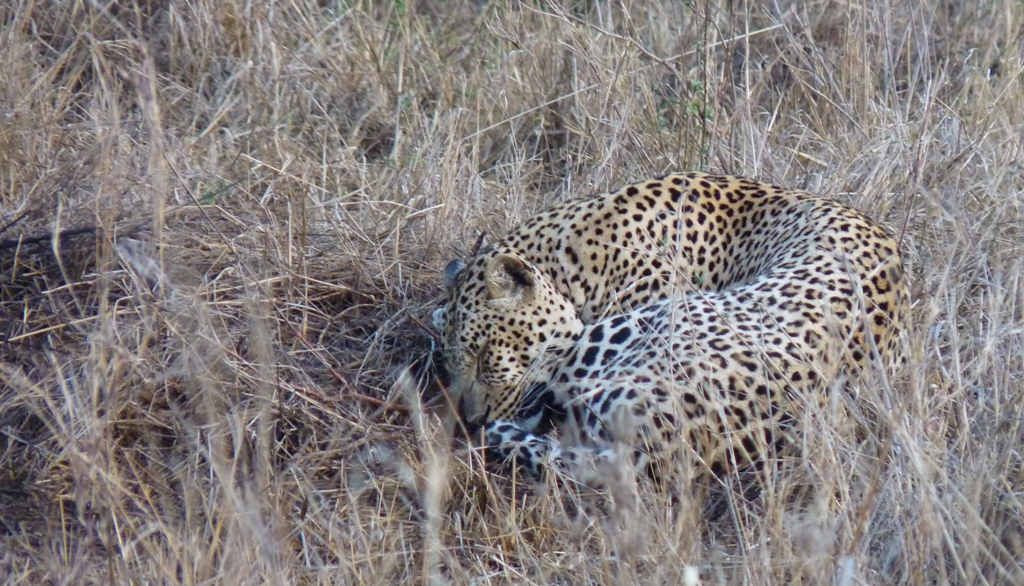 While we were in the Serengeti, we stayed at the Osupuko Tented Camp. It is run by a group of Maasai men and is made up of large tents each with limited electricity and their own bathrooms. Taking a shower requires coordination as they will boil the water for you and load it into a gravity shower with some cold to get the temperature you want. All within reason of course as water is a very prized commodity here so there is a limit of 20 liters hot water per person. For us this was heaven and quite an unexpected indulgence after being on the road all day.

The camp is set near one of the hillsides near the center of the Serengeti. Osupuko means ‘natural wonder’ in the Maasai language and from seeing this area it’s obvious why they chose this for the name of the camp. This central location makes it easy to get back out there the next day and gives some very close experiences with the wildlife. Like our last camp, there were Maasai security around and a flashlight was used to signal when you wanted to travel between areas. The flashlight was also good for searching around and seeing the blue eyes of hyenas reflected back at you. This camp was in the bush and the animals were around. At first we were a little concerned, but the confidence and presence of the staff there made us feel more at ease. By the end of our time at this camp we had had dinner with hyenas, slept with zebras and had breakfast with giraffes. What a great experience. 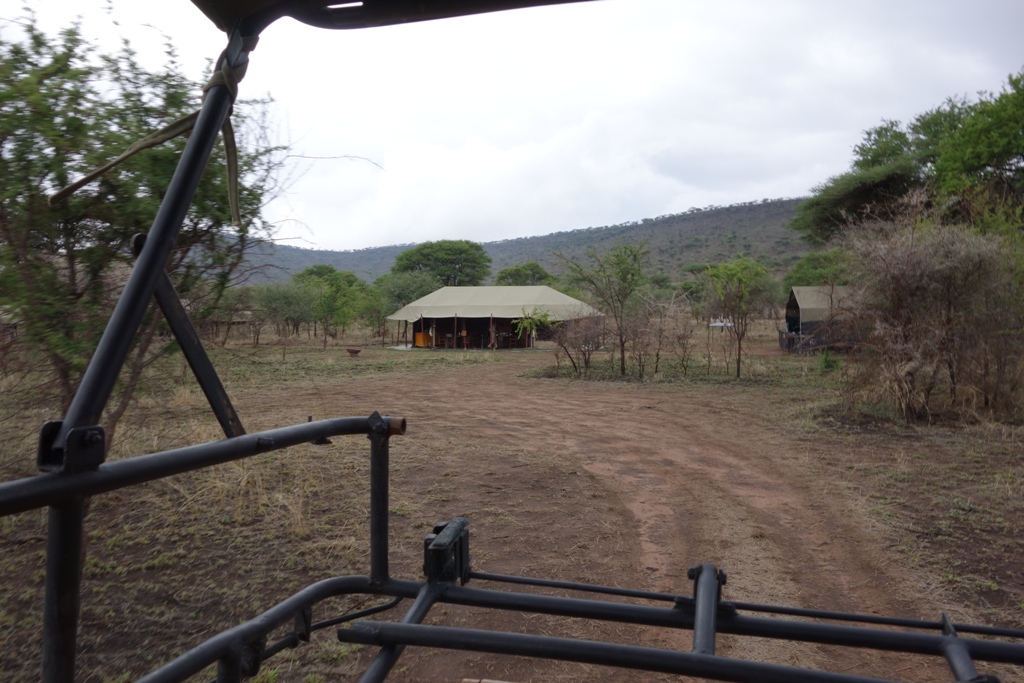 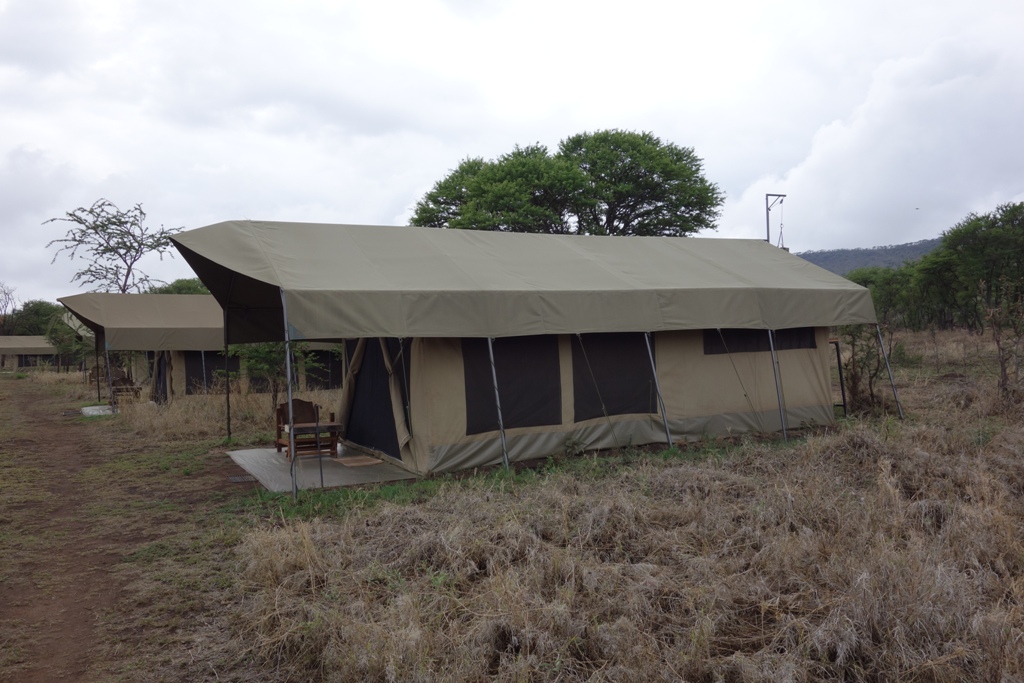 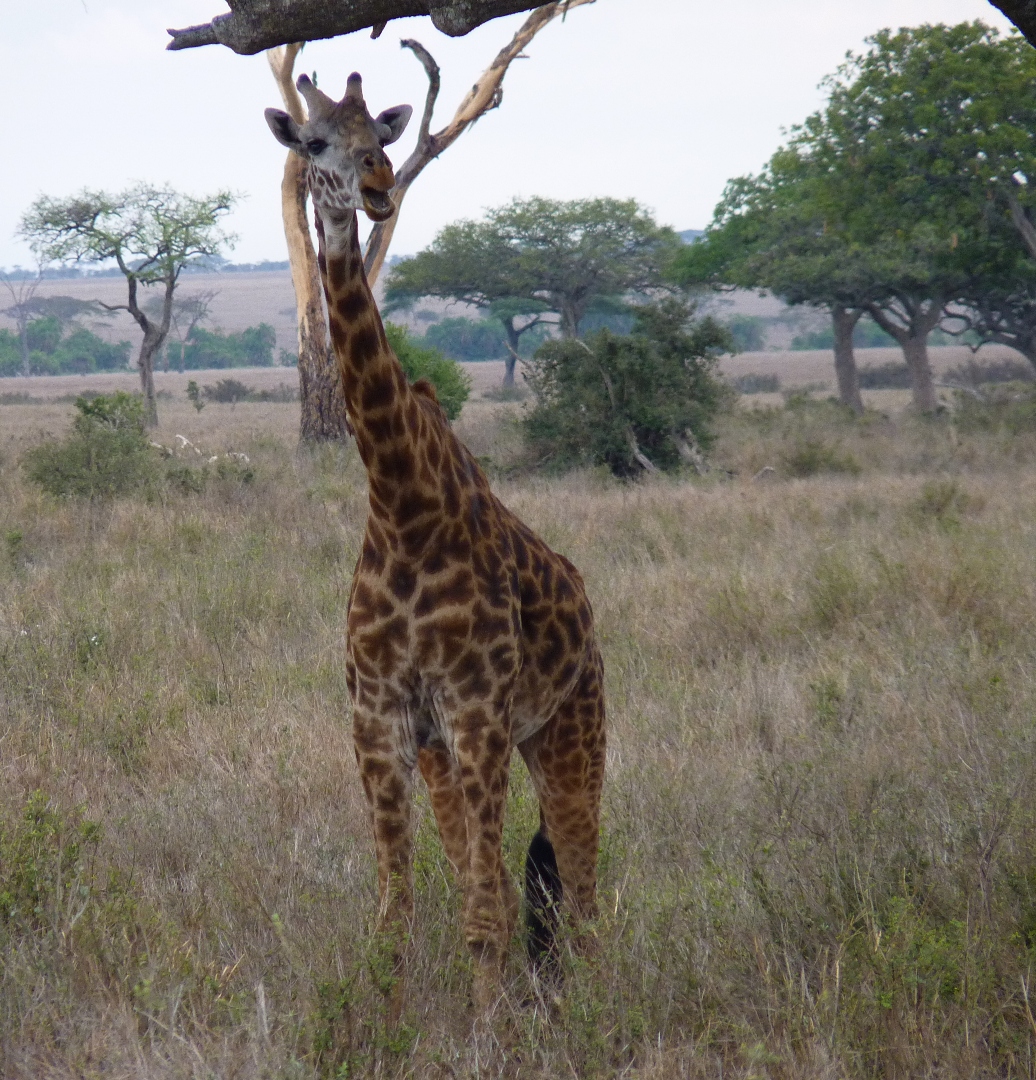