We started early, leaving at 6:00 with makings for coffee for later, so we could see what happens when night changes to day. Zebras had come through the camp at night and you could hear them nicker to each other. As we drove out we passed through the herd that we spent the night with. 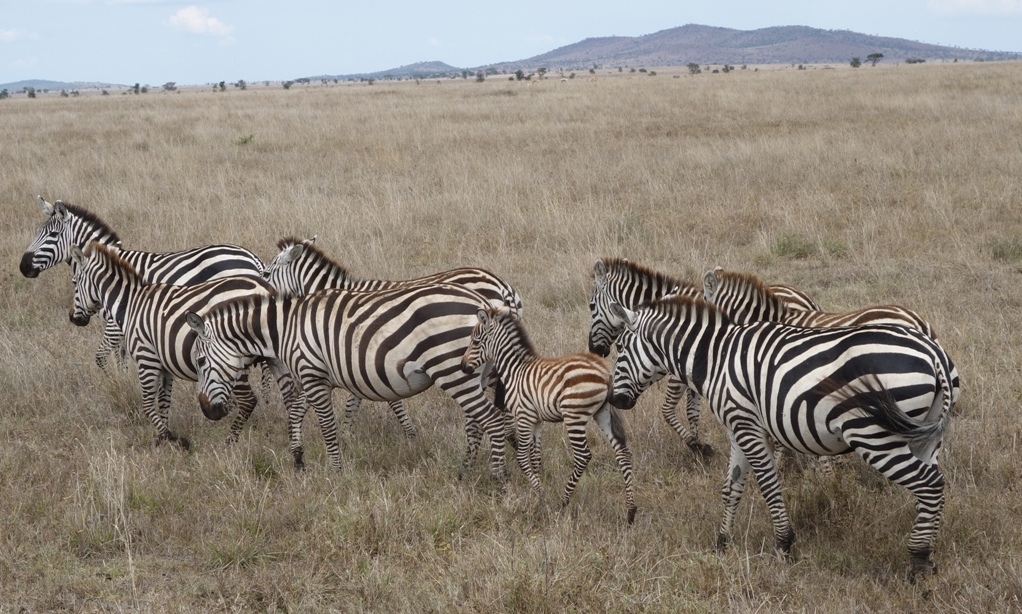 Zebras outside of camp

We drove looking for the animals waking up and getting themselves moving the morning, the night prowlers going home after a good nights hunt and the opportunists finding a meal from what was around the night before. The night before the camp manager, a Maasai named David, named our driver ‘Lucky David’ and himself ‘King David’ to help differentiate the two. Lucky David was based on our luck of seeing the two cats eating the day before. This luck stayed with us in the morning. On our morning tour we were able to see Leopards, one gone to tree already beginning it’s sleep for the day. The other left its tree and went on a hunt for some gazelle. The gazelles were fast and the leopard left hungry. 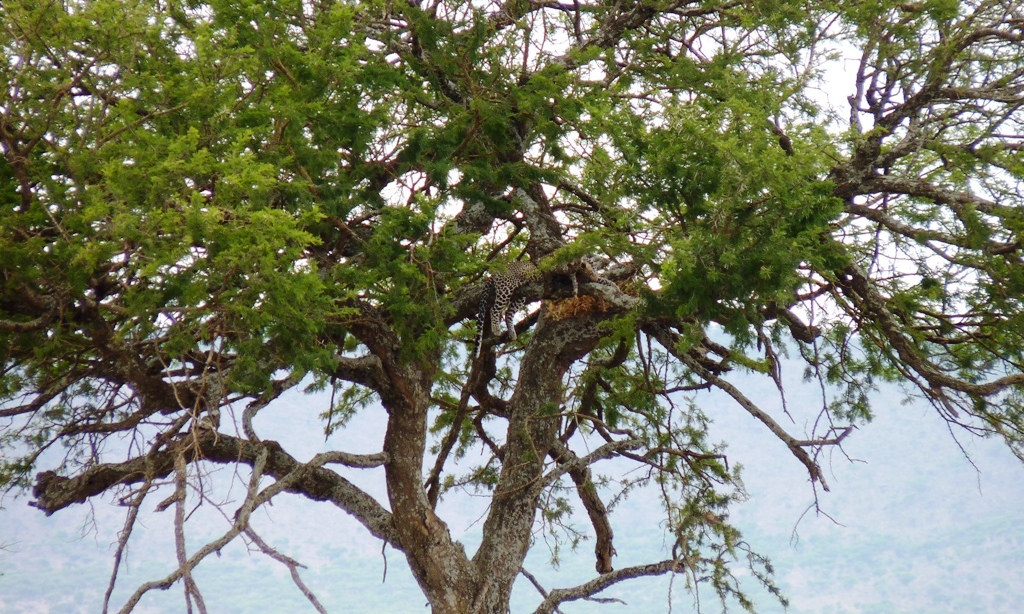 As we headed north past the center of the Serengeti we saw a pride of lions laying on a rock over looking the river. There were about 6 females and we didn’t see the male. Behind us a herd of African Cape Buffalo were heading into the center area. From the size we estimated 300+ buffalo. An impressive sight! 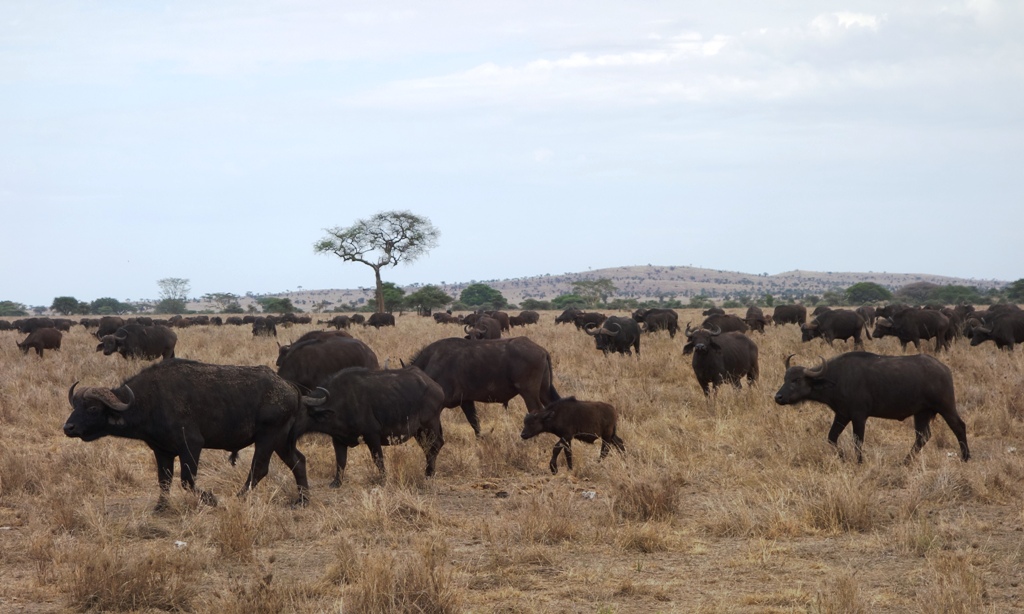 We drove north from here and checked out some hippos in the river. Each night they leave the water and take the same path to go graze grass, heading back to their pool before sun up. Their skin is reactive to the sun, so they have to stay submerged for sun protection. We didn’t realize how territorial they are until David told us of how they will kill any other animal that enters their pool, including people. 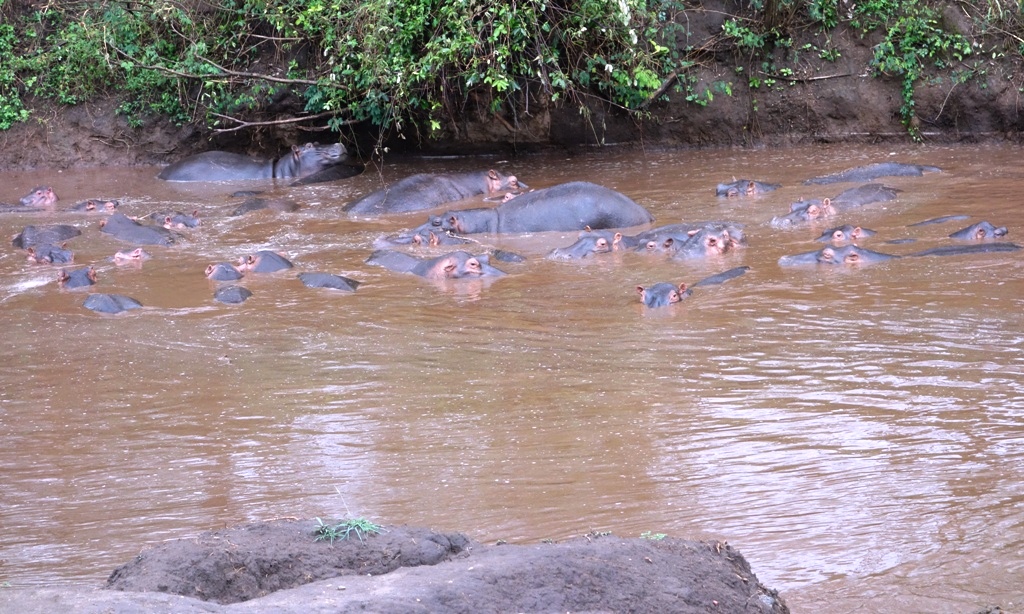 Heading back to camp for breakfast around 9:00 brought us to a fascinating event. Those buffalo we saw coming into the center chose the water near the lions as a place to get a drink. We got there in time to see the first of the buffalo enter the water, not aware of the pride in the area. The lionesses had staked out the area and were laying in wait. As the first entered the water, the lead lioness jumped it clamping on to its backside as it tried to flee. 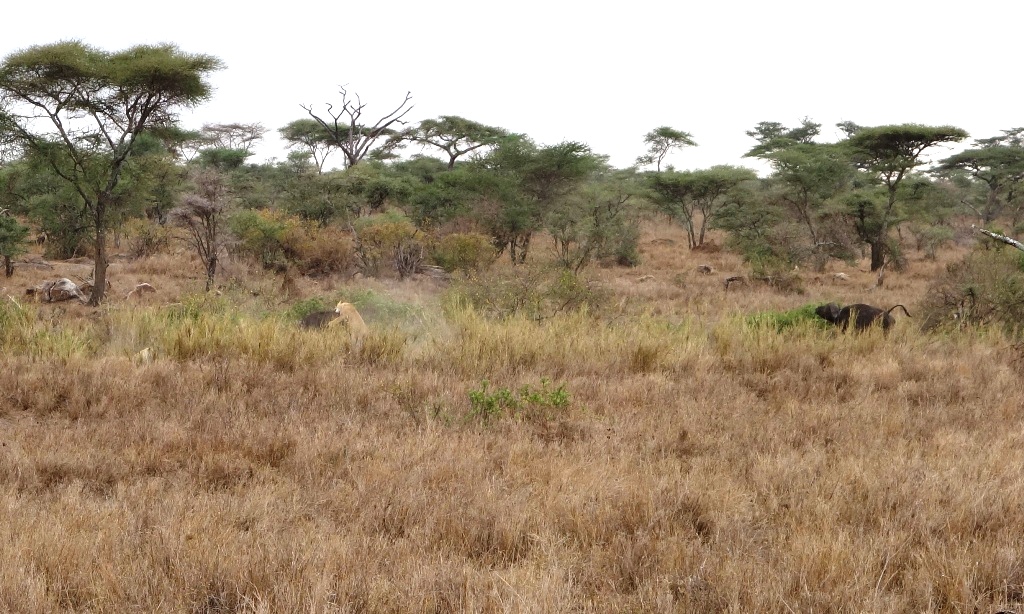 The only problem for the lions was that the buffalo had its herd with it so no supporting lionesses could get on the targeted buffalo. The next 30 minutes were captivating as the chess game between lions and buffalo played out. In the end, the lions left hungry and the buffalo got their much needed water.

Breakfast back at Osupuko camp was spent with a family of giraffes. They had come in and were enjoying their breakfast with us. We headed back out again after eating and went to go check out the kopjes, which are granite formations exposed through erosion that are round like a head. These usually have a variety of game who live on and around them. We were able to see a number of dik diks and heartbeasts on this trip. The dik dik is a small deer like animal, about .33 meter long and not quite that high. They mate for life, so you normally find them in pairs.

In this area were also rock hyrax, a small animal that looks like a guinea pig, but who’s nearest living relative is the elephant. This odd fact was what made them stand out to us. There were some tawny eagles in the area that were interesting to watch. They are the main predator for the Dik dik. 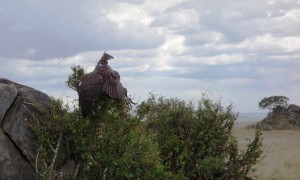 Past a group of kopjes called the Massai Kopjes we ran into more luck. We spotted another cheetah, this one on the hunt. It sighted a small heartbeast in its area and stalked toward it. Once it began its chase it was a marvel to watch in motion. It covered so much ground that the chase didn’t seem to take long. Because of the long grass and a group of larger heartbeast providing protective grouping, the cheetah went hungry. This one too had a younger cheetah with it that we saw once the chase had started. David let us know that the mother cheetah will take its young with it while it hunts and then eventually the young will participate. This will go on until the young does the hunt and makes the kill. After their first kill, the mother leaves since it knows the young has what is needed to survive.

There is an information center at the center of the Serengeti in an area called Seronera that has a very good tour. They have young adults from the surrounding areas guide the tour and talk to the ecosystem of the Serengeti and the great wildebeest migration. In this tour we learned that the alkaline soil of the Serengeti plain grows a grass who’s mineral make up is vital to the birthing cycle for the wildebeests. Because of their migratory nature and the abundance of predators the young need to get moving as soon as possible. This grass helps enable this, with new born calves walking within 15 minutes of birth. Impressive coming from the animal said to be made up of left over parts from other animals.

While the days have been rainy off and on, they have been beautiful, eventful and magnificent. We head back to Osupuko for our last night there thankful we’ve had this experience.