Today we finished up with the Serengeti in the morning and headed back to Ngorongoro Conservation area. We started early again, waking at 5:30, grabbing the makings for coffee and heading out to see what our neighbors have been up to. Since it has been raining, most of our neighbors have been quite happy with the new found water supplies. Some taking the time to rest their full bellies in a puddle. 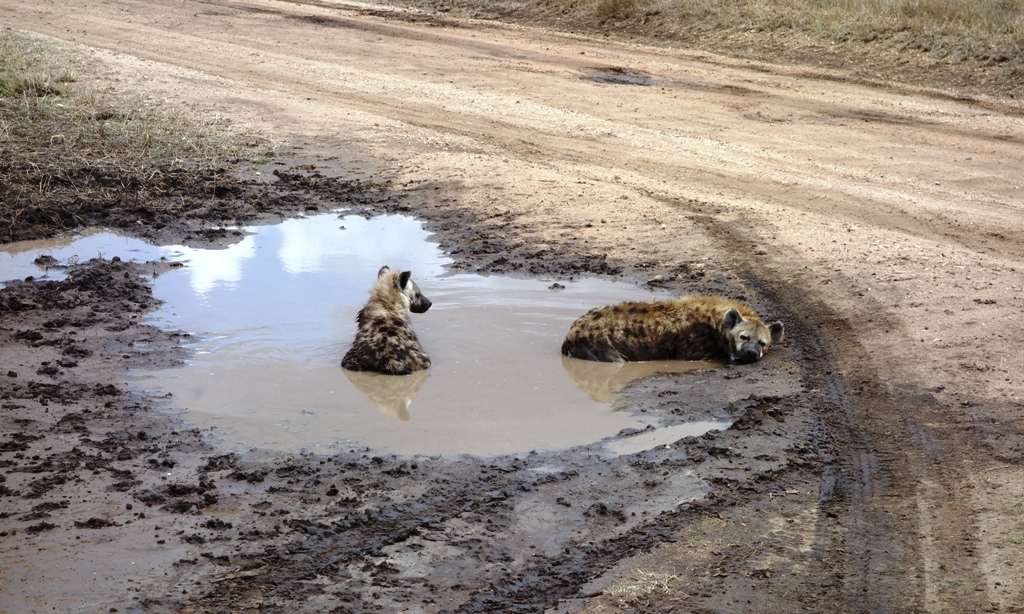 This morning we were fortunate enough to see a pride of lions take a Cape buffalo. The buffalo was alone, separated from the heard and without the protection the herd provides. The lions and their 3 pronged approach were practiced at encounters like this. One lioness takes point, one positions herself in a potential escape route and one flanks the buffalo. The buffalo spots them and starts to flee but the lions are fast. The buffalo then turns to do some damage of its own, but the lions are faster and back pedal effectively. This burns up what energy the buffalo had, so when the lions do finally get onto it, it too tired to fight much. It was difficult to watch because we were rooting for both sides. We wanted the lions to eat, but we also wanted the buffalo to escape. 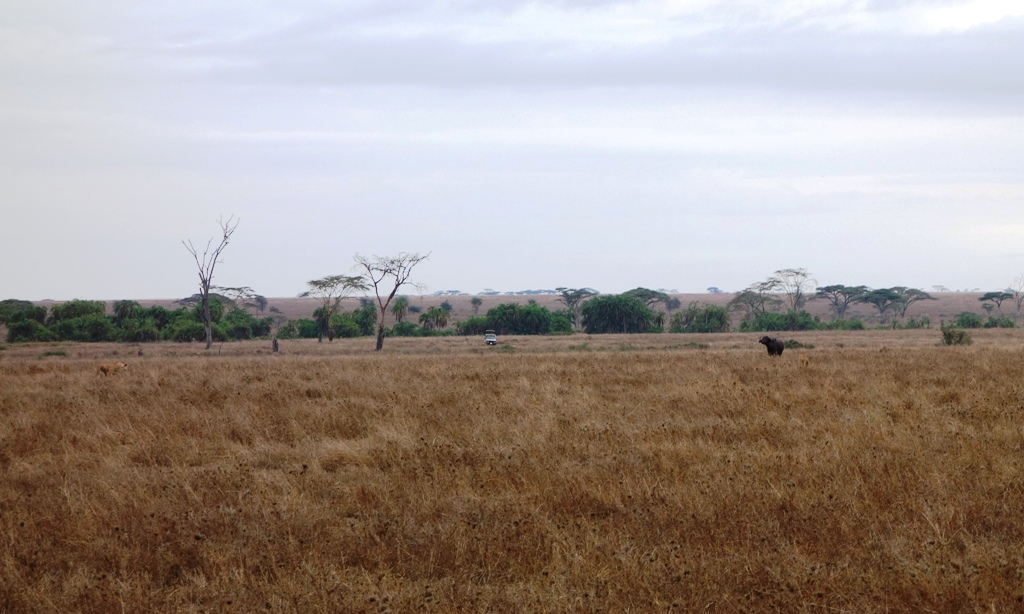 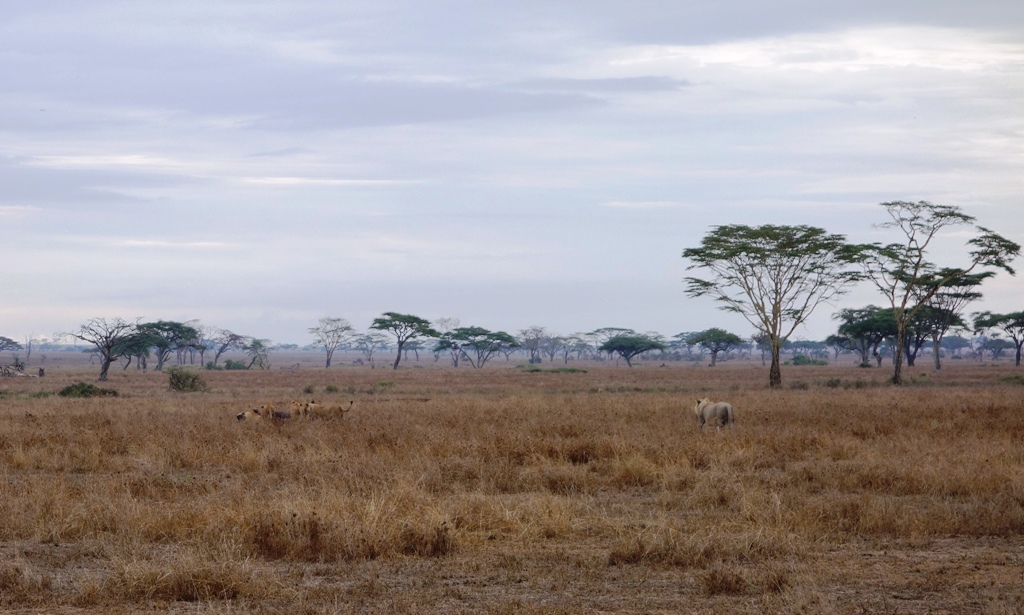 With the rainy weather the humidity is up and the temperature is down a little. With the cloud cover this is great hippo weather and this morning we found one that was still out from its night of foraging. It was near the pools of water, so not out grazing, just enjoying the weather a little. This gave a chance to see how bit the hippos really are. Seeing them out makes it hard to think they can move that much bulk as far and as fast as they do. They do it though, running faster than a man when they need to. 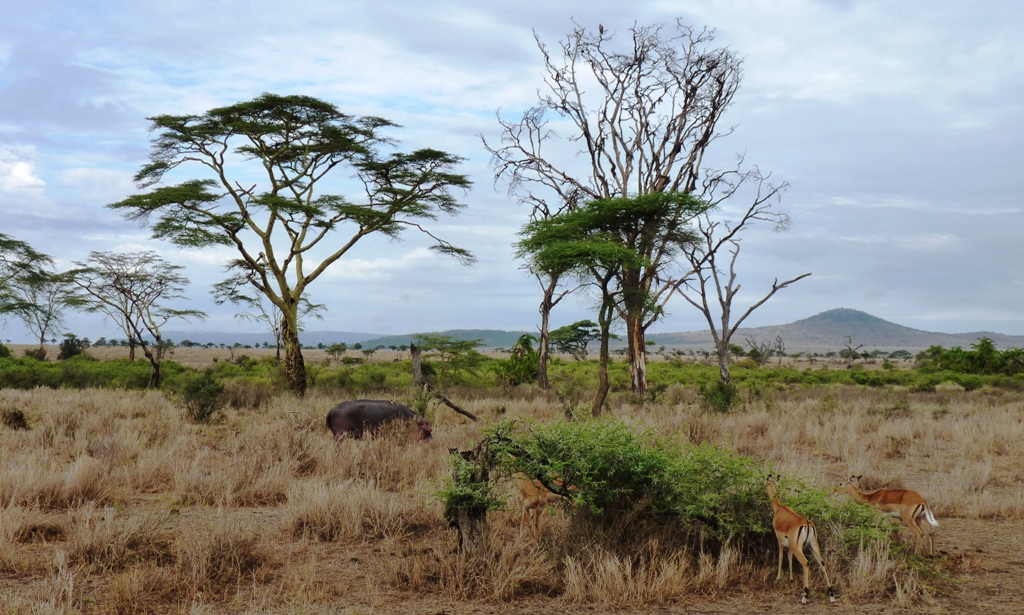 We head back to Osupuko for breakfast and to pack so we can drive out. The guys there had a treat for us. King David named Mihaela ‘the red lioness’ when we first got to camp because of her red hair and the Maasai love of the color red. As a gift for the red lioness, the men sang a good bye song for us. It was a wonderful treat, but we had to disappoint them and tell them the red lioness was leaving. 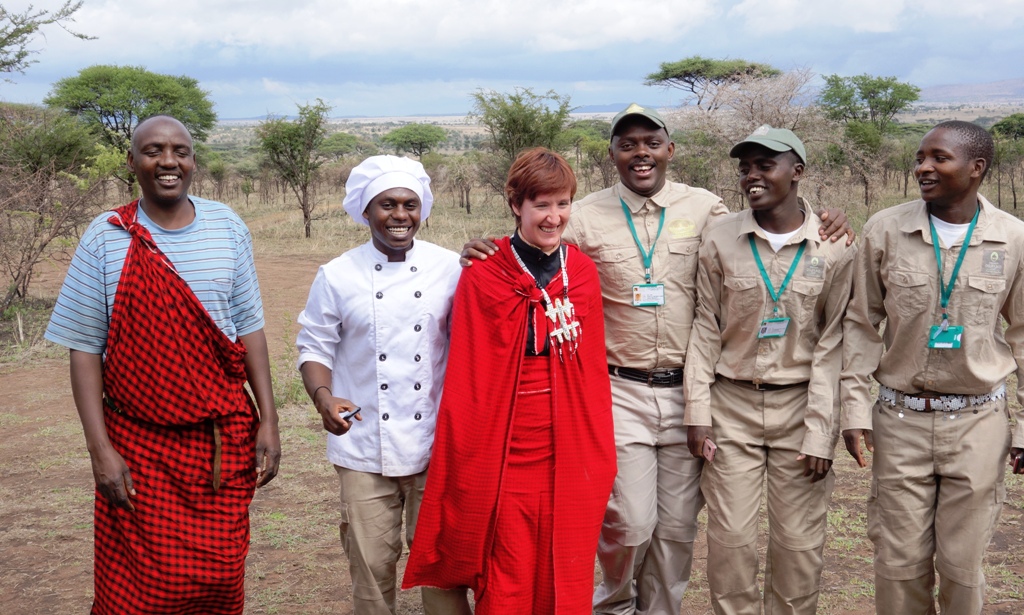 Since we had a bit of time before we had to head out for Ngorongoro, we went further north of Seronera to see if we could find any crocodiles. As we were heading out, the rains started with a vengeance. Since the ground had been so dry, much of the water was passing over the ground rather than soaking in. This made for flash floods that quickly filled the roads. Now we know why all the trucks have their exhaust routed up. 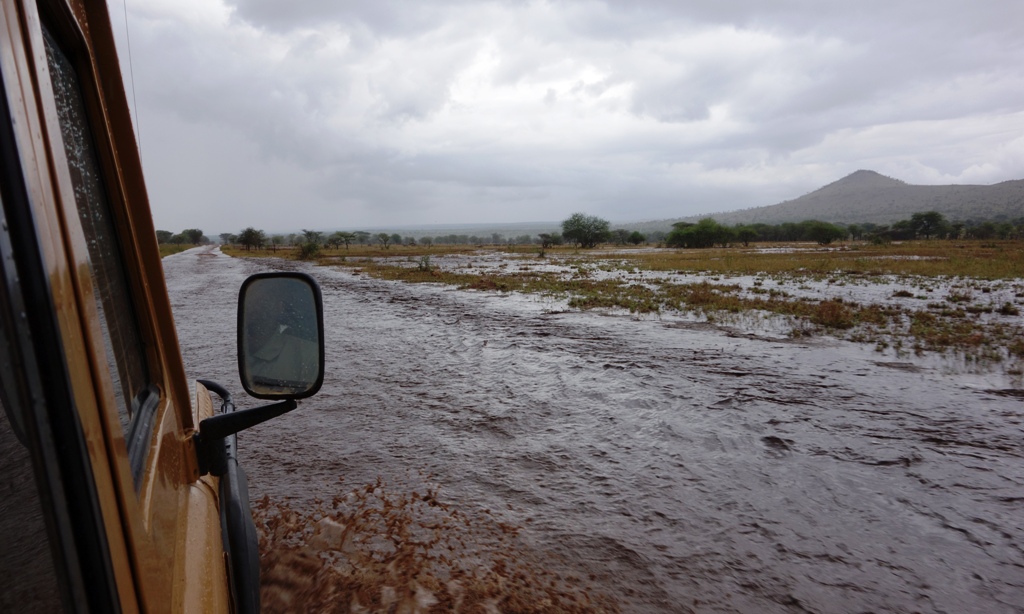 Our trip north was rewarded with a sighting of a single croc. It was sunning itself on a shore not too far from a huge group of hippos. 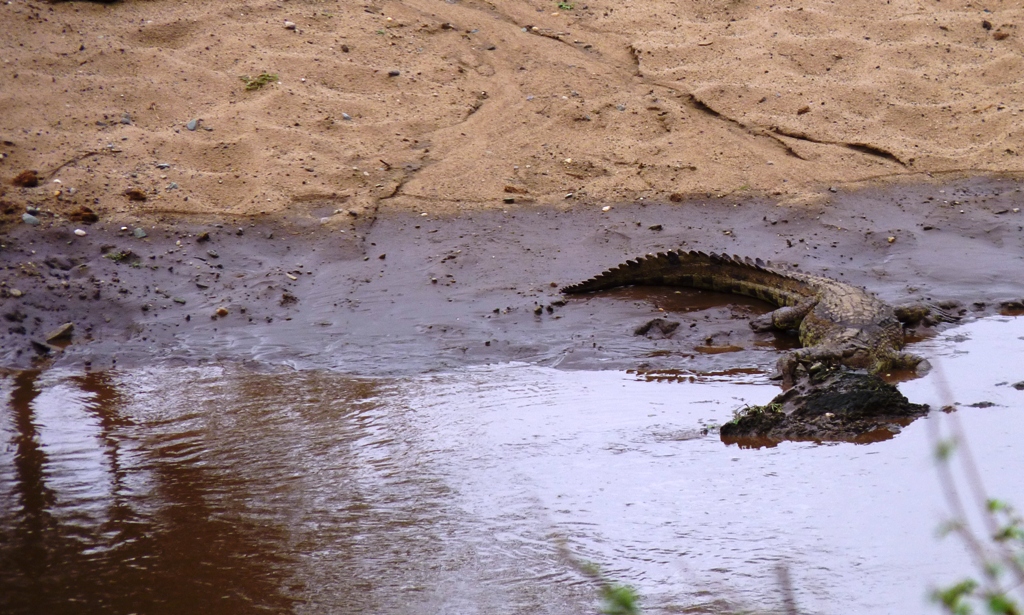 There were about 50 hippos in the group. Instead of the sedate creatures we had seen before, this group was very active, playing and calling to each other. Playing, of course, is opening their huge jaws as far as they can go and trying to bite their neighbor. 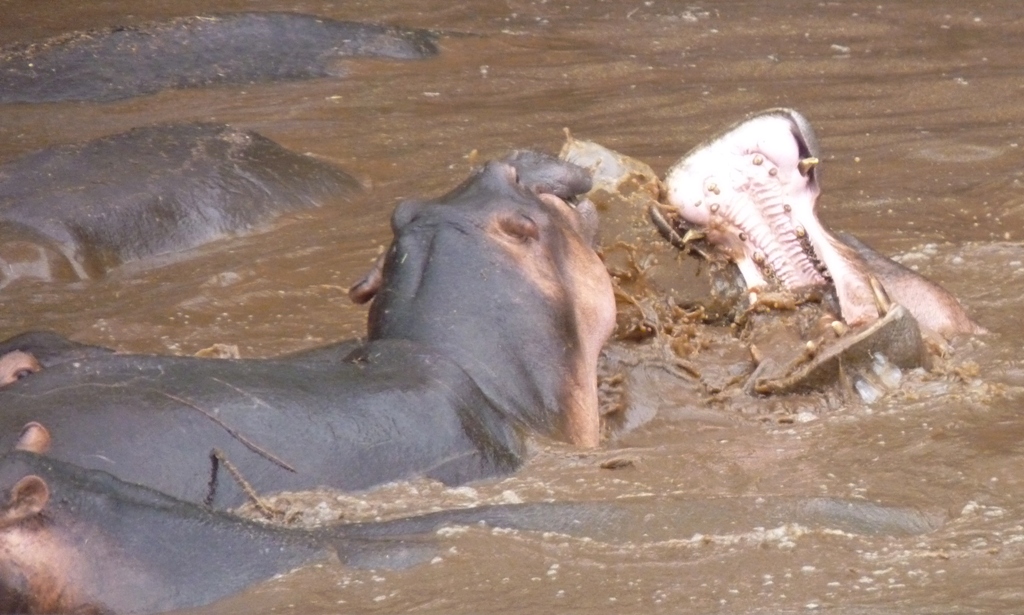 This was a good fair well to the Serengeti. The rest of the day was spent slowly making our way through torrential rains back to Ngorongoro. At a couple places we weren’t sure how David kept the truck on the road, but he did, delivering us to the Rhino Lodge safely. 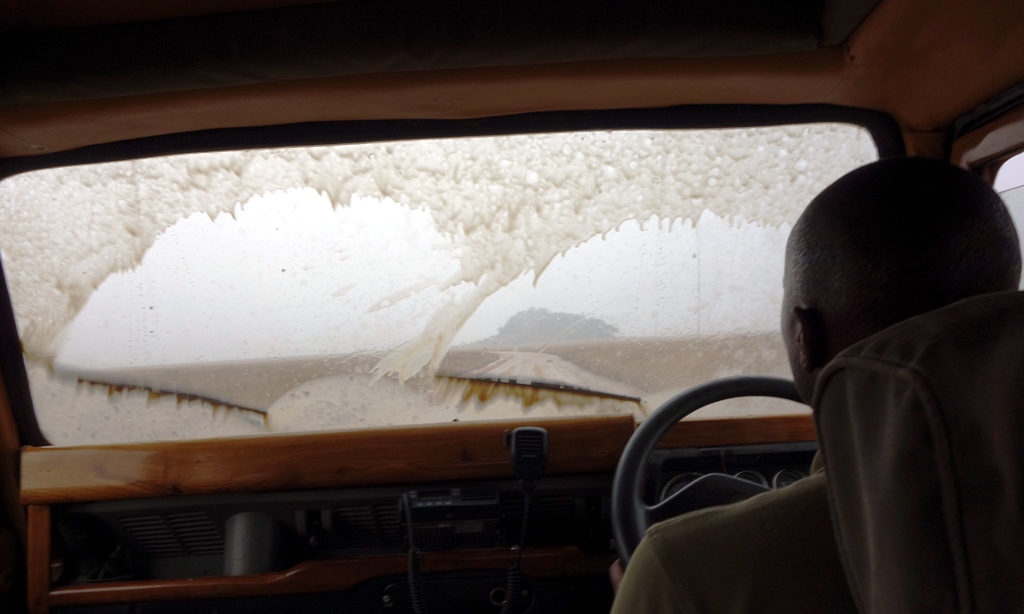 We were met there by a herd of Waterbucks. They have a unique defense mechanism of producing a very strong, pungent musk of they are attacked. This keeps them from falling to the lions and other predators very often. 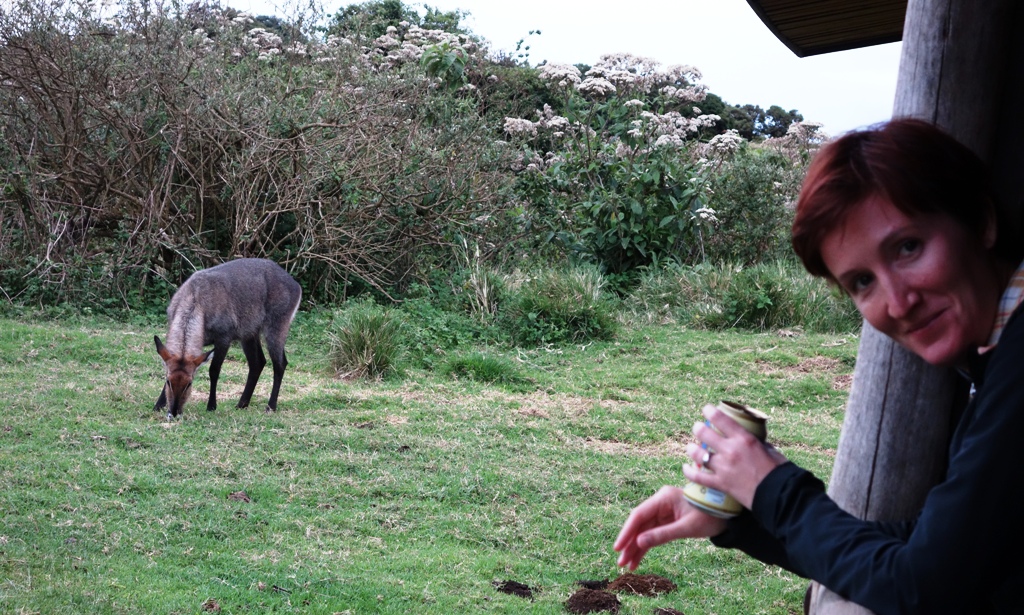