Day 6, our last day on Safari. We headed out of there lodge at 6:00 going to the floor of the Ngorongoro crater. This area is a refuge because of the nature of the crater. It’s sheer walls make it difficult to get into and out of. The Maasai use this area as a grazing area for their cattle. Each day they bring their herds over the rim and into crater floor so they can graze, returning back over the rim each night.

Many animals still make the journey over the rim as well. The crater floor has a few unique attributes that draw life to it. The alkaline nature of the soil bleeds into the lakes that are in the crater, becoming wonderful area for greater and lesser flamingos to spend their days. 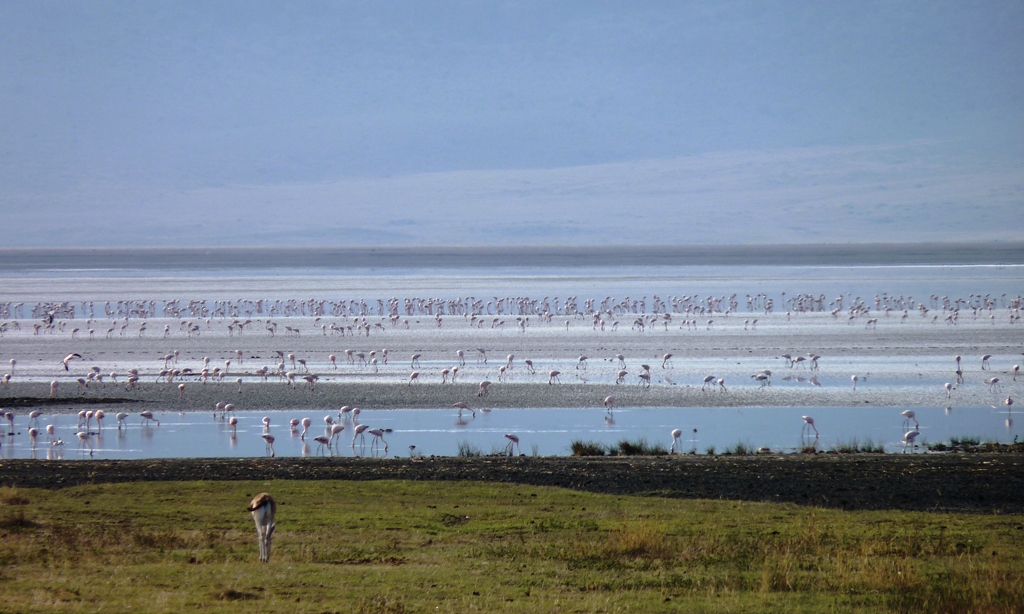 One of those lakes is part of a marshland that grows a soft grass that elephants come for. Only the older elephants make this journey as their teeth aren’t up to eating acacia foliage and thorns anymore.

Panorama at the floor

We’ve really come here to see if we can spot a rhinoceros. This crater is also one of the last places you can find wild black rhinoceros due to the increased ranger protection that can be provided here. The natural layout of the crater helps to limit the area poachers can come and certain portions of the he crater are off limits to anyone but the rangers. This means a visitor is not guaranteed to see a rhino, but that rhinos can have some space to live.

On our way into the crater we are introduced to two interesting things. First, a land rover can handle very, very steep inclines. The current road into the park is at an angle that is breathtaking in itself. The fact you get a great view of the creator is the one thing that kept our attention off of how steep the trail really was. The second thing that we learned was that the older elephants living on the crater floor dig for minerals on the roads. The grass they can eat now isn’t very mineral rich, so they occasionally come out of the crater and find places on the road where they dig with their trunk and tusks to supplement their mineral needs. 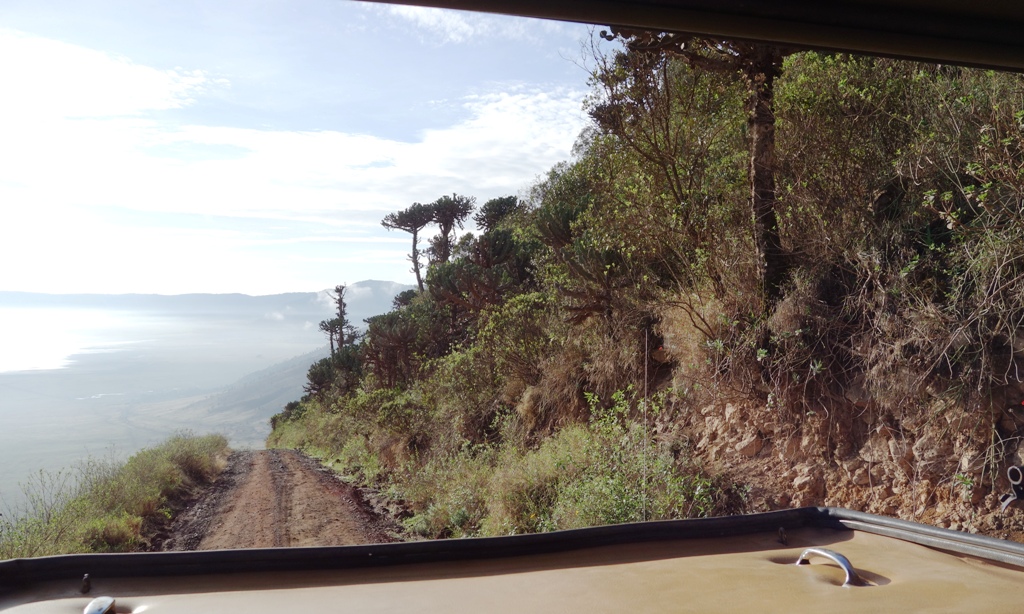 Where did the road go?

When you look down into the crater, you see green expanses, some barren are reads where the lake has been and a couple lush green areas. When you are down of the crater floor you realize that you were not seeing the multitude of animals living on the crater floor. Most of the grazers and browsers are here, zebra, gazelle, wildebeests and cape buffalo. There are predators here as well. The cheetahs don’t come, but hyenas, leopards and lions are around. We even found a couple groups of hippo who were in the crater.

Not to gush about lions yet again, but… While we were surveying around we came upon a group of lions who had finished their meal. There were 12 lions, 4 male, 8 female, all satiated and looking for rest. They decided that since it was a hot day, and they weren’t near any trees, to use the truck as a shade spot. I have to say it was very exciting to see lions so close. I’m glad there was the truck between us and them. 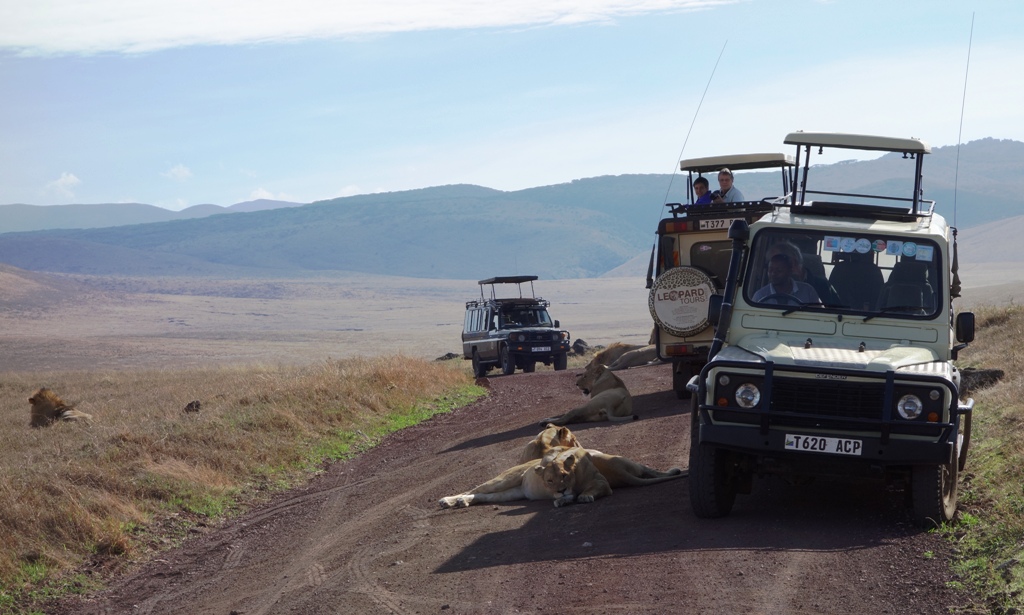 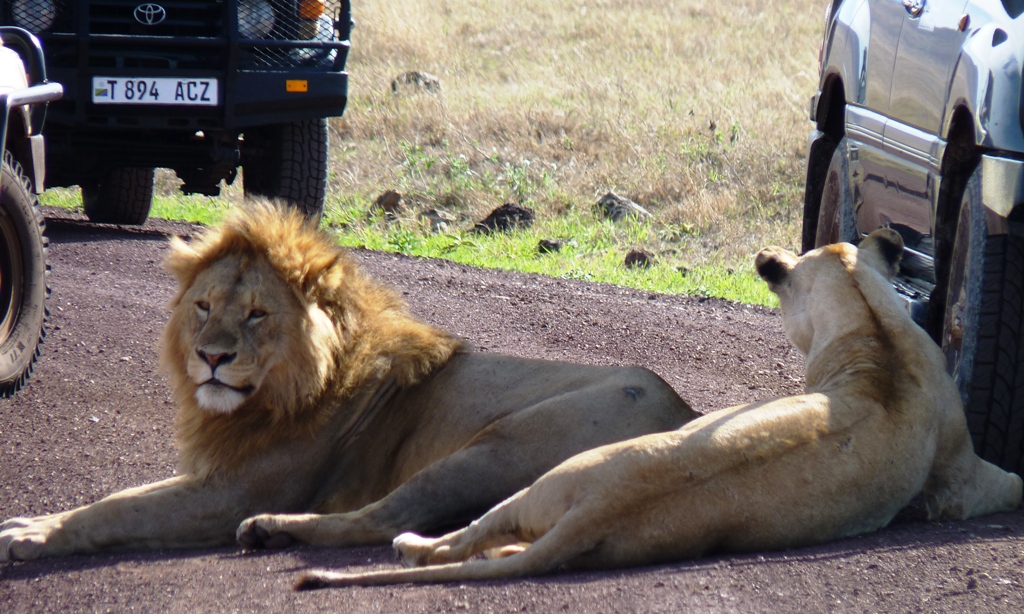 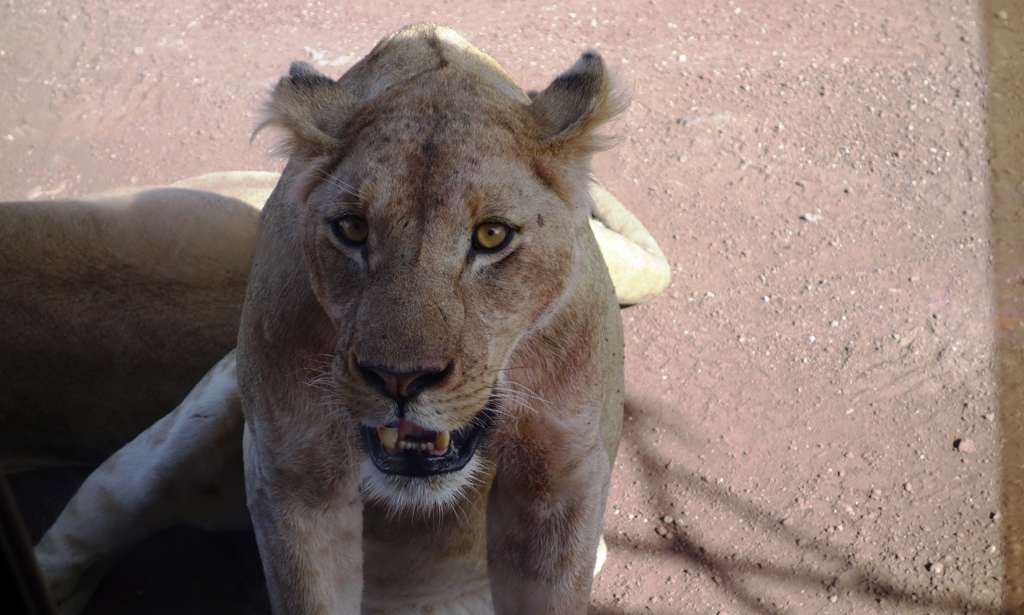 What do you have in there?

We were blessed. That is the only way I can really describe it. As we were looking at all the wildebeest and zebra, oohing and aahing over the chance lion sightings, Mihaela looks up and asks ‘what are those big things there.. Are those rhino?’ She was able to spot two black rhino, completing our sighting of there big five on our trip. These were two who were out for the night and headed back to the forest area where they normally spend their time. After we had watched them a little, David got on the radio to see if ranger was near by, because rangers are normally tracking all of the rhino. David found out that Mihaela was the first to spot them in the crater that day. Woot Mihaela! Rhino are shy animals and don’t like attention. We saw these from about 100 meters away. They wanted to cross, but once the word got out, more trucks showed up to see them. They did what any self respecting rhino would do at that point. They laid down and slept the rest of the day. 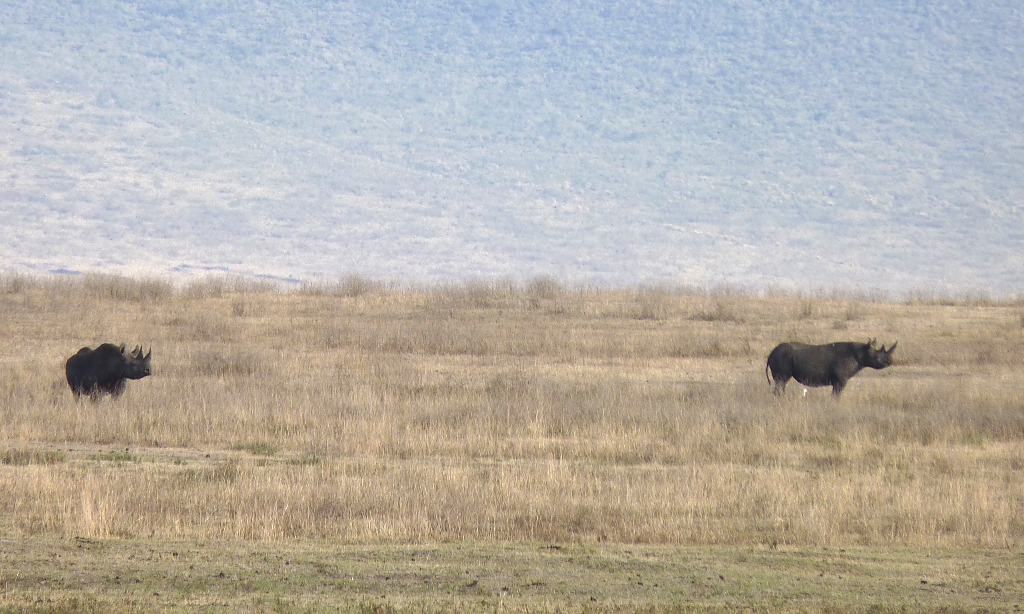 This was a great end to a great safari. We headed out of the he crater and back to Arusha. To be honest, once we hit pavement again… we missed our massaging chairs