Ok, so public New Years Eve celebrations are popular everywhere. They are big. In San Francisco there were fireworks on three barges that were synchronized so everyone could see them from many different areas of the city. The only thing that caused hiccups with this was the weather. Great banks of fog would roll in, dropping the temperature and causing everyone to wish they had another layer on. Once the fireworks went off the crowd was rewarded with great explosions of colored cotton candy clouds instead of a full fireworks display. It wasn’t bad, but often it wasn’t what the crowd expected. Because of this experience we wanted to see what a New Years Eve fireworks display was like in Sydney, Australia. We had seen pictures on the internet and thought we had a better chance of seeing some actual fireworks here.

Our plans for Australia were to stay in Sydney for a couple days and then take a campervan around the east coast. Unfortunately, we couldn’t find a hotel in the Sydney area for under $500 AUD per night. cough.. That was a bit too much for us. Instead of a hotel, we shifted our plans and picked up a campervan early, thinking we could find a campground not too far away.  What ended up happening was that we had to covert camp in the city because there was nothing left at the campgrounds in the area. This was a blessing because we were very close to downtown and we could get down to where the action would be.

After some hiccups with a late plane from Johannesburg, an unexpected night in a hotel by the airport and a walk to the suburb where Spaceships have their campervans, we had our home on wheels by noon on New Years Eve. We braved driving on the left in a big city and made our way downtown, putting our little cabin in a safe spot for the night.

Something to mention is that we are used to New Years that are in the middle of winter. Either snow, fog or general poor weather help the old year pass and offers a clean slate for the new year to being. This was different. 34 degrees Celsius, sun shining, shorts on everyone we see and sweat on most. There were crowds of people milling around, making their way to the waterfront. We knew there was where the fireworks would be. We found a spot on the quay, near the waterfront, that wasn’t too crowded and had a good view of the opera house and the bridge. It was filling up very fast, so even though it was only 2:00 in the afternoon we staked out a spot and started our wait.

Waiting with the crowd for a good view

Our waiting in the sun on the burning pavement with thousands of other people shoulder to shoulder was duly compensated. At 9:00 PM, when the New Year comes to being in the middle of Pacific, was a fireworks show that was bigger than any we’ve seen. At midnight the sky was filled from opera house to bridge with fireworks. Ok, this was worth the effort. 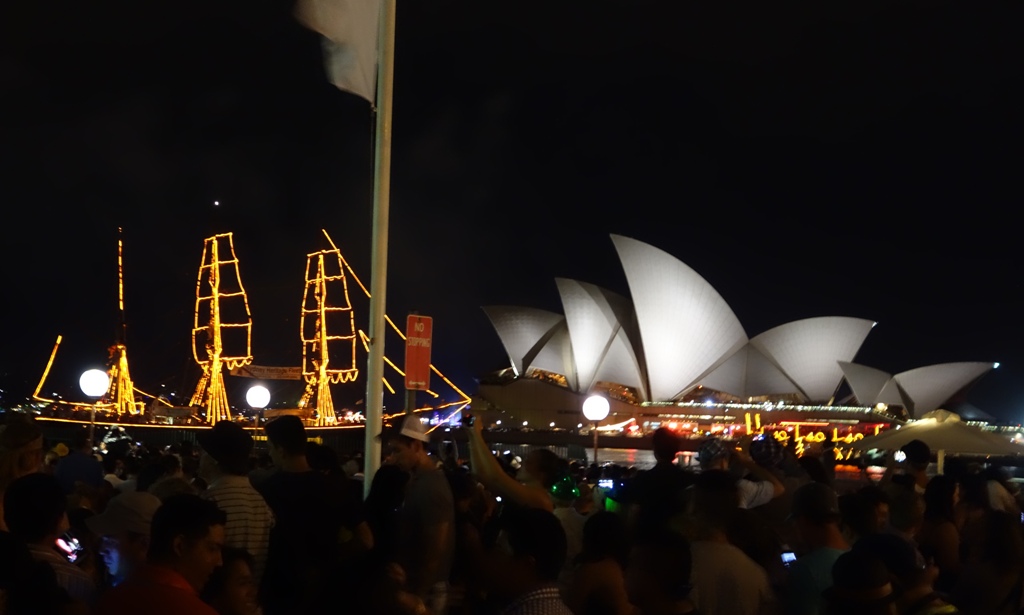 Opera house with a three mast sail boat lit up 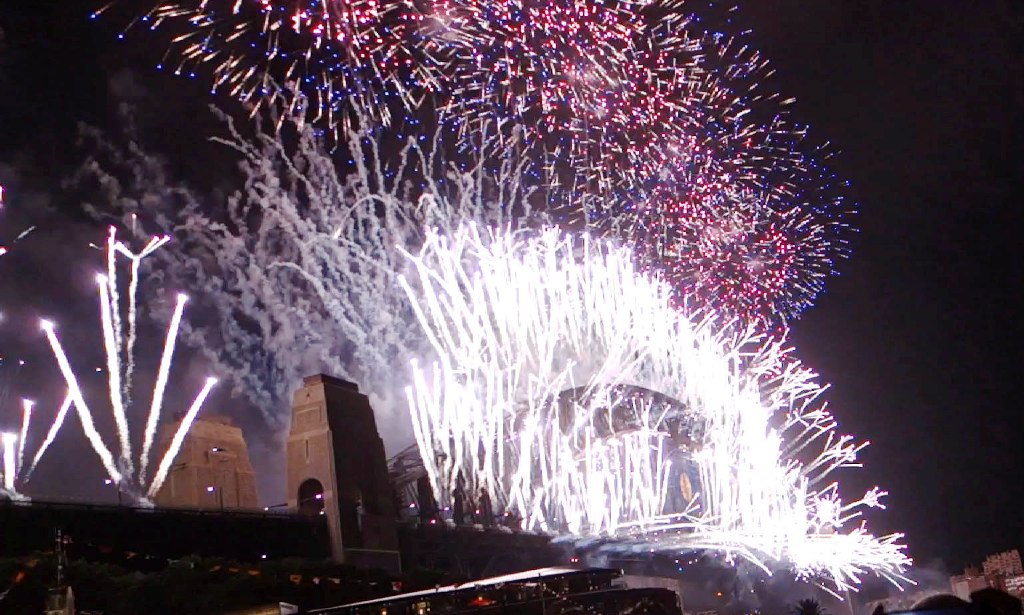 4 thoughts on “Sydney for NYE”