Wow… I mean really this is about all you can say for the Tongariro Alpine Crossing. It’s one of New Zealand’s best one day hikes. Many people say one of the best one day hikes in the world. After doing it I can attest to the beauty I have seen and wonder I have after being there. It’s a hike that will put you through your paces and get you to understand your physical fitness a bit better as well.

The Tongariro Crossing is 19.4 km whose elevation changes from 760 meters above sea level at its lowest point to 1886 meters at its highest point, and it takes between 7 to 9 hours. The hike has a few strenuous areas along with wide open spaces and spectacular views. This part of the trip was another treat we offered to share with Jacqueline when she visited, and she eagerly agreed to it. Half way through, none of us were too sure if we should have been so eager to do it. At the end, we were all very glad we took on the challenge.

For the fans of LOTR, this is the land of Mordor. Mt Ngauruhoe (English pronunciation: Nah-eu-ru-ho-eh) was used as Mt Doom. The land looks like it is a volcanic wasteland. Steam raises from the ground. Sulfur smells fill the air.  You can almost feel the touch of Sauron. Almost. Then you wake up from your LOTR dream and realize you are in fact hiking through this area and really start to enjoy the beauty. While all those Mordor descriptions are true, they are part of a greater painting that doesn’t feel so sinister.

The hike starts on the south side of Mt Ngauruhoe, at the Mangatepopo car park, where our arranged ride dropped us off. We will pick up our car at the end of the hike at the Ketatahi car park where we left it in the morning. 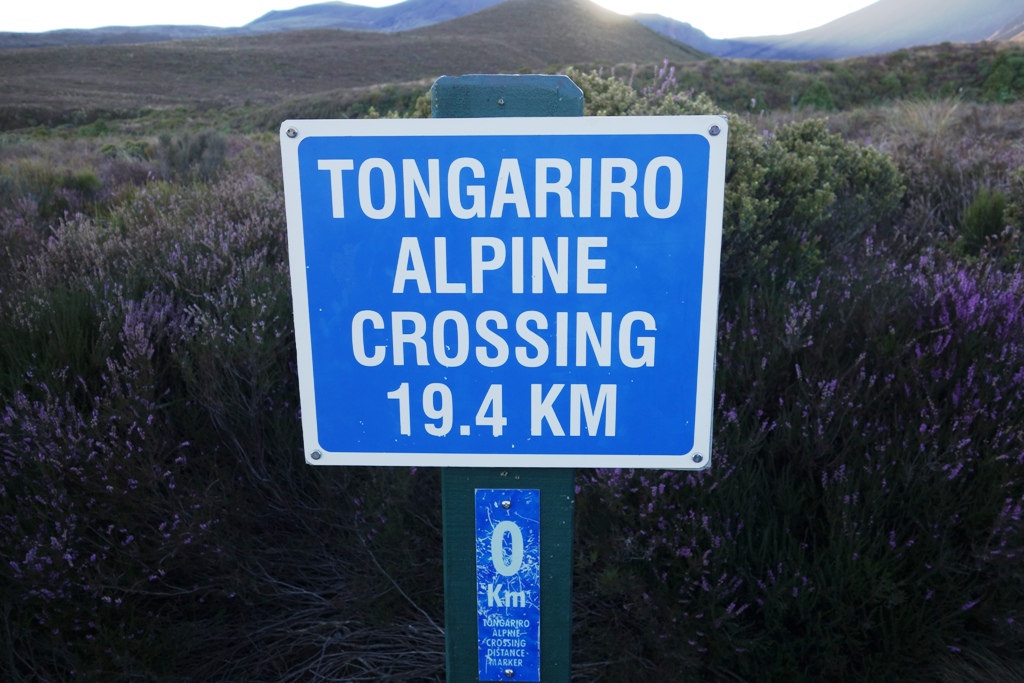 The hike then proceeds up towards the Soda Springs. This part rewards you with great views of Mt Ngauruhoe, a scramble of volcanic rocks with colors ranging from black, to brown, red and white, as well as of the valley that you left behind. 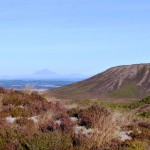 Mount Taranaki way in the distance 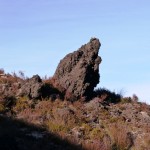 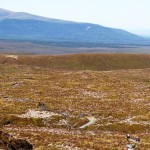 From Mangatepopo to Soda Springs 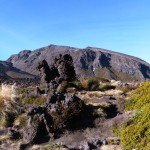 Amazing views on a sunny morning 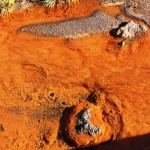 River running at the base of Mt. Doom 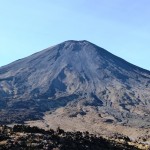 The hike up from Soda Springs to the South Crater is one of the steepest and most difficult parts of the hike. Difficult enough that they have a sign telling you that you should be fit enough to proceed from here, or if not turn back. 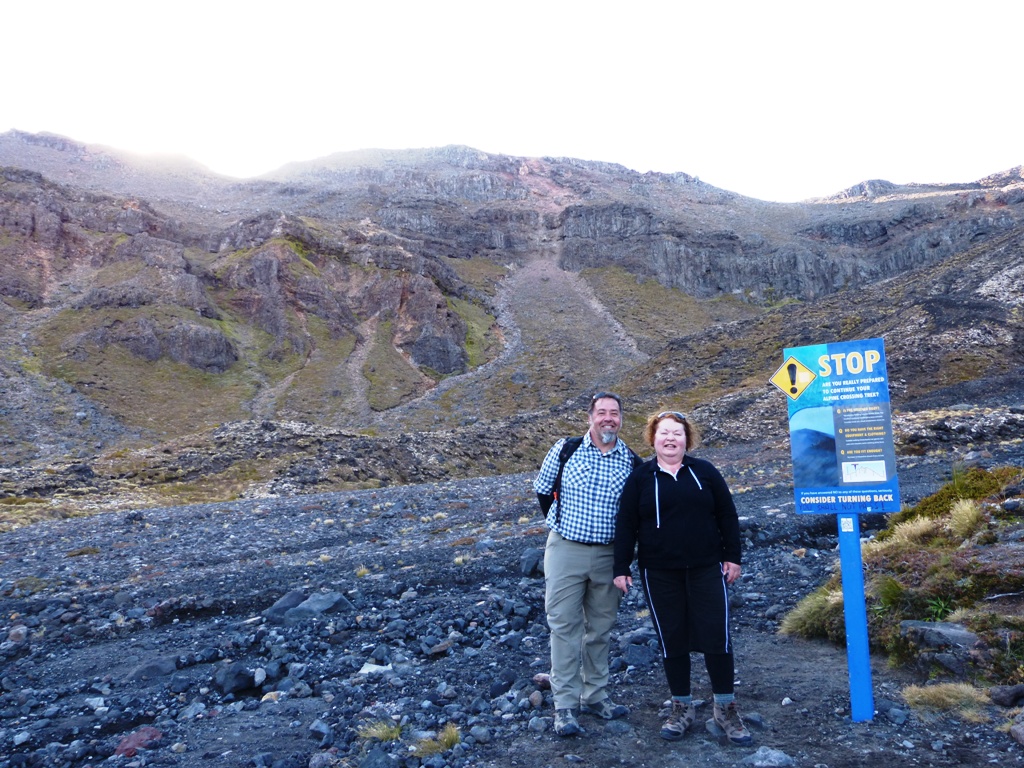 Check up point – are you fit enough for this?

This ascent took something out of all of us. Everyone on the hike takes their time here. The path contains many switchbacks, so it’s not too steep, but it’s steep. And long. After we reached the top of this is where you ask yourself ‘Why am I doing this?’. Of course since you reached the top, you have your first answer. From this height the views are gorgeous. It was a clear day for us and we could see all the way to Mt Taranaki on the west coast. 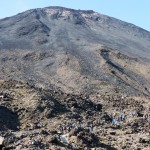 The hike up to the South Crater 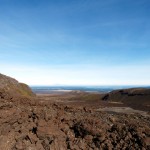 Views of Mt. Taranaki from the South Crater 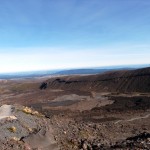 Views of the hike up from Soda Springs 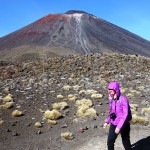 From this junction, you have a choice to make as a hiker. You can climb to the peak of Mt Ngauruhoe (another 2-3 hour hike starting at around 1650 meters elevation and going to around 2280) or you can continue the trek and admire the peak from the distance.

If you choose the climb, you have to be at the saddle of the South Slope before 9:00 AM if you want to complete that and the rest do the trek. Also note, that this leg takes about an hour and a half to go up and only half an hour down. This is because the descent is a loose gravel scramble on a 35 degree angle. Wheeeeee! No, none of us were up for that today.

Heading north through a great plane with lava rivers you see that the last incline wasn’t the only difficult part. The rest of the way doesn’t have as much of an ascent as what you just did, but there’s more. For the people thinking of turning around and heading back this is where they should do it, if you go up the next rise to the Red Crater, then it’s easier and quicker to complete the hike than to return to the Mangatepopo car park.

We continued on up to the Red Crater, on the way talking to our fellow trampers, encouraging and being encouraged by them. It was really impressive how most everyone gave a ‘good job’ to each other along this hike. I’ve been on other strenuous hikes before and not experienced so much camaraderie. Near the top where the Red Crater is, you face another choice: go to the peak of Mt Tongariro or continue the trek. This detour is not as harrowing as going to the top of Mt Doom, but we didn’t take that on either. Our planned path was just fine with us. 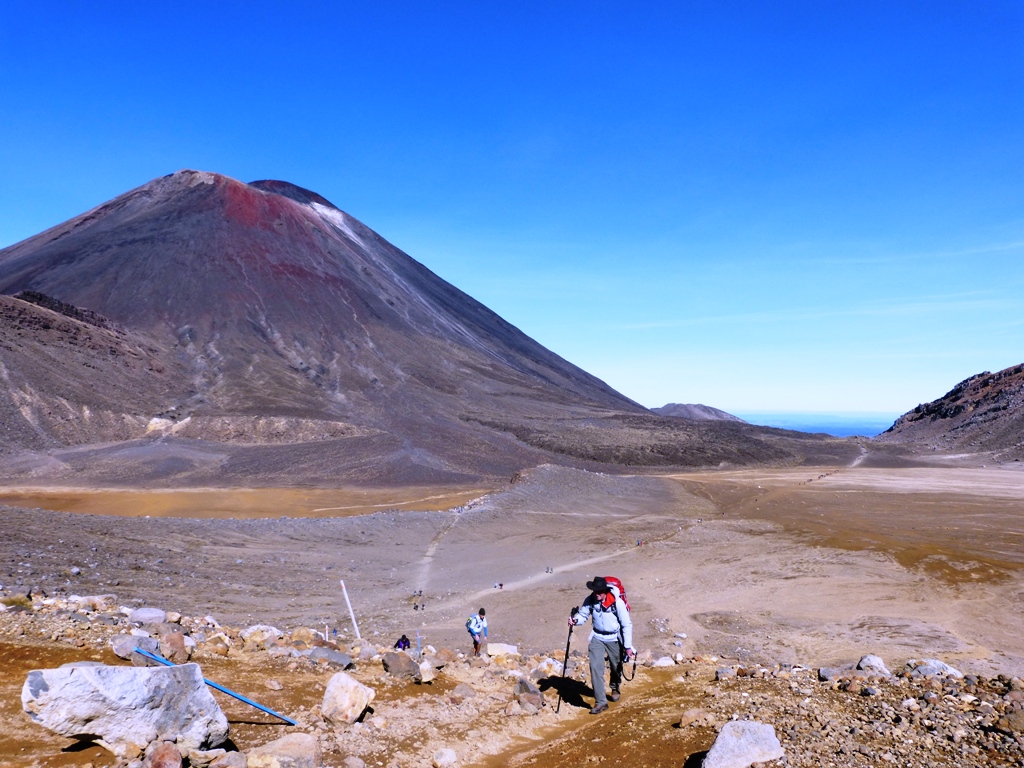 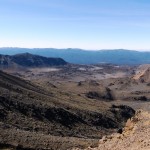 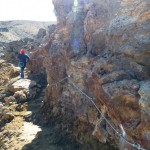 Last push to the Red Crater

We did learn why this leg of the hike is one of the most difficult though. Here, near the highest part of the tramping track the wind is very strong. Strong enough that as people go up, they sometimes get knocked over, so often you see groups suddenly drop to their knees to keep their progress. When we got there we saw why they were dropping. The path is narrow, maybe 2 meters wide. One side drops into the Red Crater, the other side down the loose gravel cone. Strong gusts of wind come from the crater side blowing the dust and rocks around you and sweeping you from your feet. Jacqueline almost took a spill down the gravel side because another hiker near her was not so good at keeping her balance and was blown into Jacqueline. Maybe another way to look at it is that Jacqueline was in the right place at the right time to help that other hiker out when she needed it.

Hikers put to their knees by the gusty winds

After this peak, it’s mostly down hill. At least the next 200 meters. But if you think that the rest of the hike will be easy, think again. After reaching the peak, and being almost blown away, you want to descend quickly, but you have to be vary careful. These 200 meters are a scramble down loose gravel on solid stone, the same narrow width as the cone top we just went up, at almost 90 degree. The wind, the sliding steps, the drops on both sides all help to keep ones adrenaline flowing during this descent. 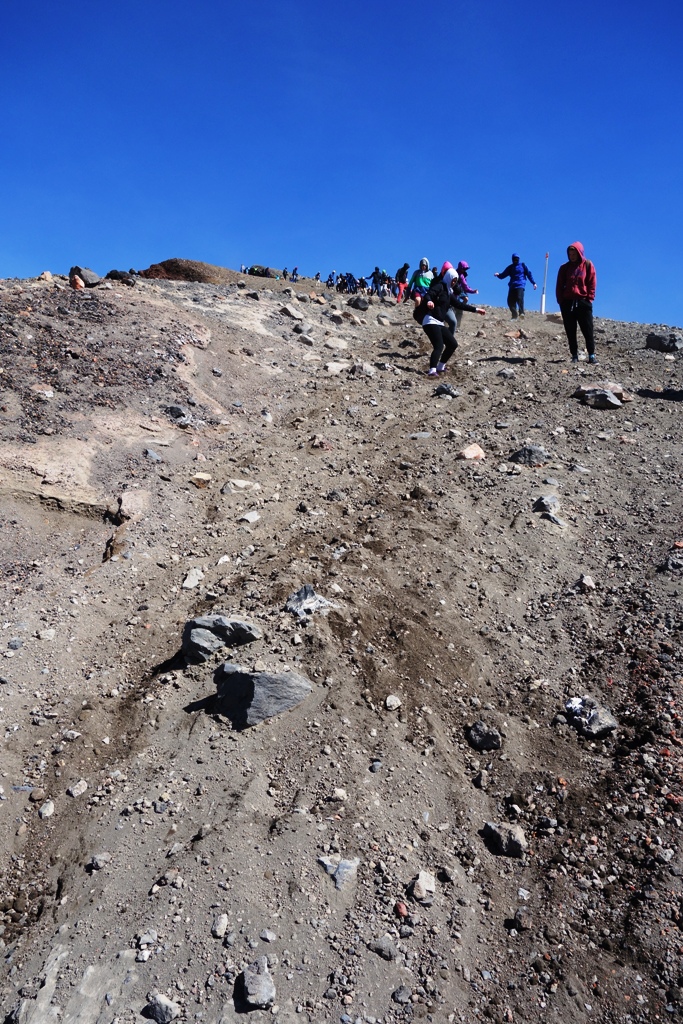 Scree on an almost 90 degrees descent

At the bottom it’s time for lunch. The wind hasn’t gone away but you can huddle and buffer it a bit. The scene is wondrous, with green volcanic pools around us and vents yellowed from sulfur build up nearby. 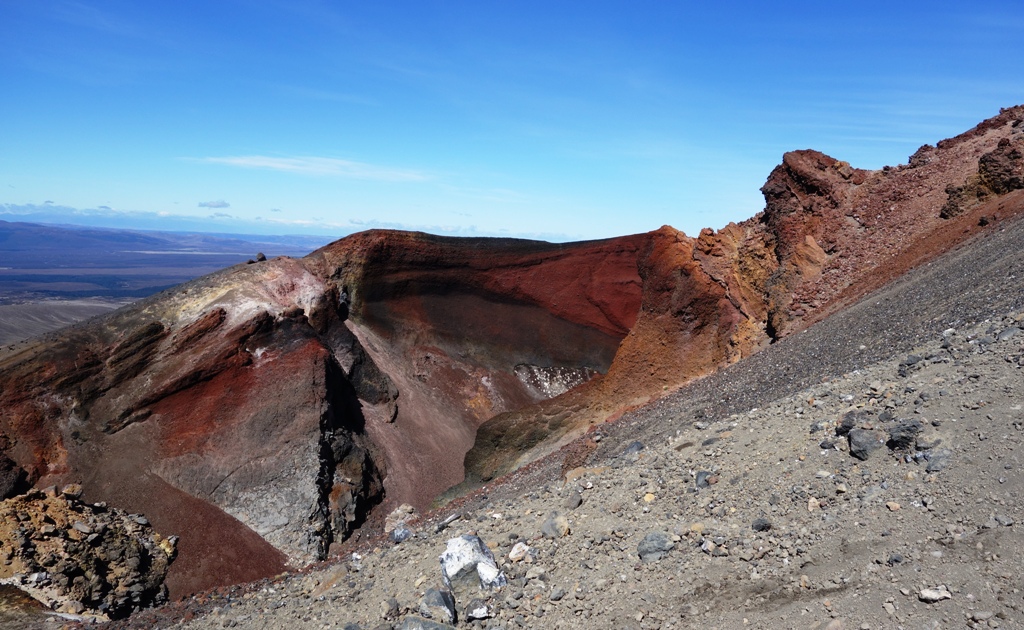 You can see across the Central Crater towards the last ascent we’ll have to make for the day to reach the Blue Lake. We are halfway done with the days tramp, but 90% done with the strenuous parts. It’s a good place to take a break.

After lunch, we try to stretch out our legs. We didn’t sit for very long, but any break after a hike like this is sometimes too long of a break. We make our final ascent to the Blue Lake and are rewarded with more stunning views. We also received blowing sand and pebbles from every direction, so our pictures here are rather limited. 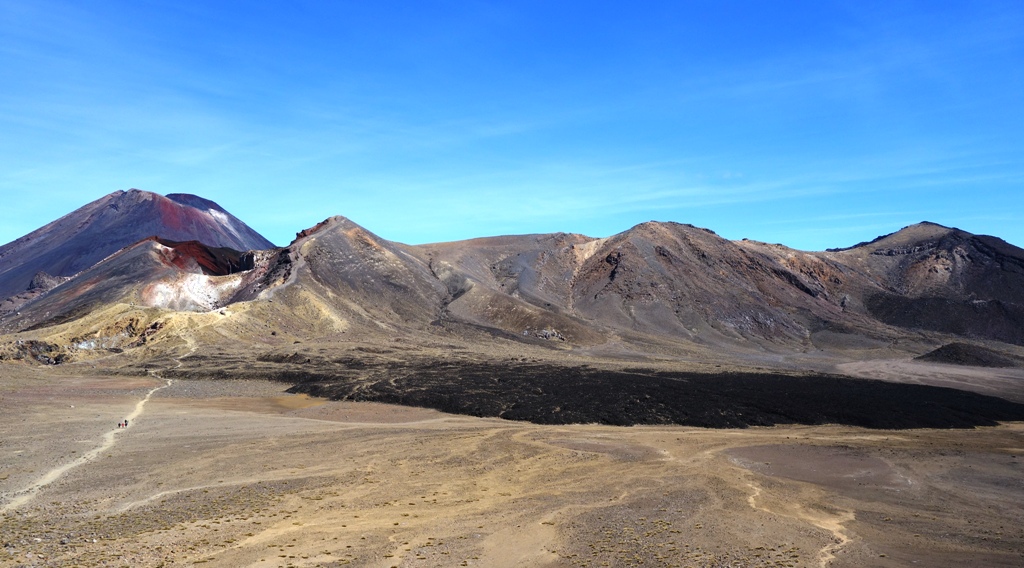 One of the few pictures we could take at Blue Lake, the wind was blowing rice size pebbles around us

From here the trail descends to the car park through wide winding switchbacks that work to get you down off the volcanoes. This is a fair portion of the hike, but you are a bit numb once you get here. You have wide open vistas, views towards the active Te Maari craters and a bit of a resting place at the Ketatahi Hut. You see these, but you don’t absorb this as much as you did with the first half do the trek. An interesting point though is that the hut is closed to overnight visits because the last eruption from Te Maari put boulders through the hut. This might have helped speed us on our way down the rest of the mountain.

Down, down, down – spectacular views of Lake Rotoaira and Lake Taupo 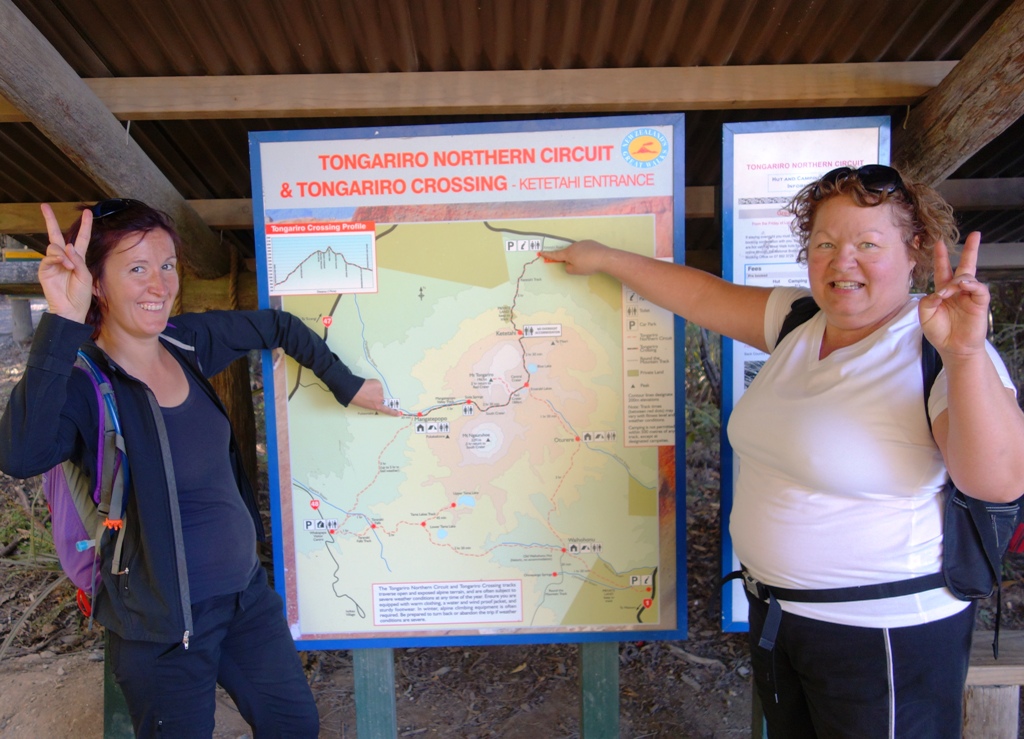 None of us had a problem sleeping that night. All of us had a problem walking the next. At breakfast, in Turangi, our server complemented us that we were up and out walking around. He’s lived in the area his whole life and only done the trek once. The way he felt the next day made him reconsider doing it again just yet.