As we finish up our two month tour of New Zealand and look back at the things we did and the wonderful time we had, we find a renewed love for this county and it’s natural beauty. We had a couple days left after our Tongariro hike before we headed out of New Zealand and to South East Asia. During this time we did a few more sights and made our way to Auckland, where all of us would be flying from.

Mt Ruapehu was our visit the day after the trek and this is where we really found that renewed love for the country. We drove more than hiked that day due to our sore muscles and the wide spread of the we places we wanted to see. The pictures we took that day probably do a better job describing why we felt the way we did. 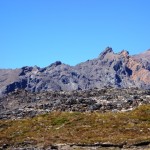 On the way to the Whakapapa ski area 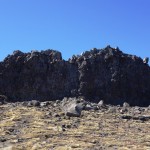 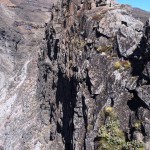 The same wall from the other side

Mt. Ruapehu has amazing rock formations to look at 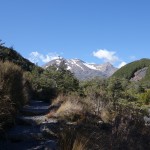 After this we wanted to do one last tourist ‘must see’ which was the Waitomo Glow Worm Caves. These caves were known to the Maori before the Pakeha were around, but it was local Maori Chief Tane Tinorau accompanied by an English surveyor Fred Mace who explored enough to find the glow worms in 1887. This glow worm, Arachnocampa luminosa, is unique to New Zealand. The arachno part of their classification comes from their spinning of threads that hold drops of mucus on them to catch flying insects. Their glow then draws these flying insects towards them. When you visit the cave, you buy a guided tour to see them. The guide are very good and very knowledgable. Most of the employees are descendants of the two guys who found the glow worms area. They give you some interesting history, then take you on a boat tour of where the worms are. The worms are sensitive to light and noise, so the boats are moved by the guide pulling the boat along guide ropes. You aren’t in the cave with the worms long, but it’s almost completely silent and dark. This gives the visit a bit of a mystical experience as you see the blue glowing worms on the ceiling. Night sky is the closest description that could be given to it.

From here we headed back to Auckland. This gave us a chance to acclimate back to civilization and out of tramping and touring mind sets. Here we indulged a little in some nice food and wine, since you know we have had to do without so much so far

Green Lipped Mussels – they do not have hallucinogenic effect though, that’s just the beer talking

And since it was the season for bluff oysters, we had to try some out too, right?

These last few experiences in New Zealand are wonderful examples of the variety and uniqueness of the types of experiences you can have here. All of our experiences here have been positive, even the rainy hikes through flooded trails. It’s just such a beautiful country and such wonderful people.

4 thoughts on “Wrapping up two months in New Zealand”